Want to Be the Industry Leader? Solve for Retention

That focus is the difference between the market leaders and those lagging behind.

But behind all the metrics and business acronyms, it really comes down to four central factors. 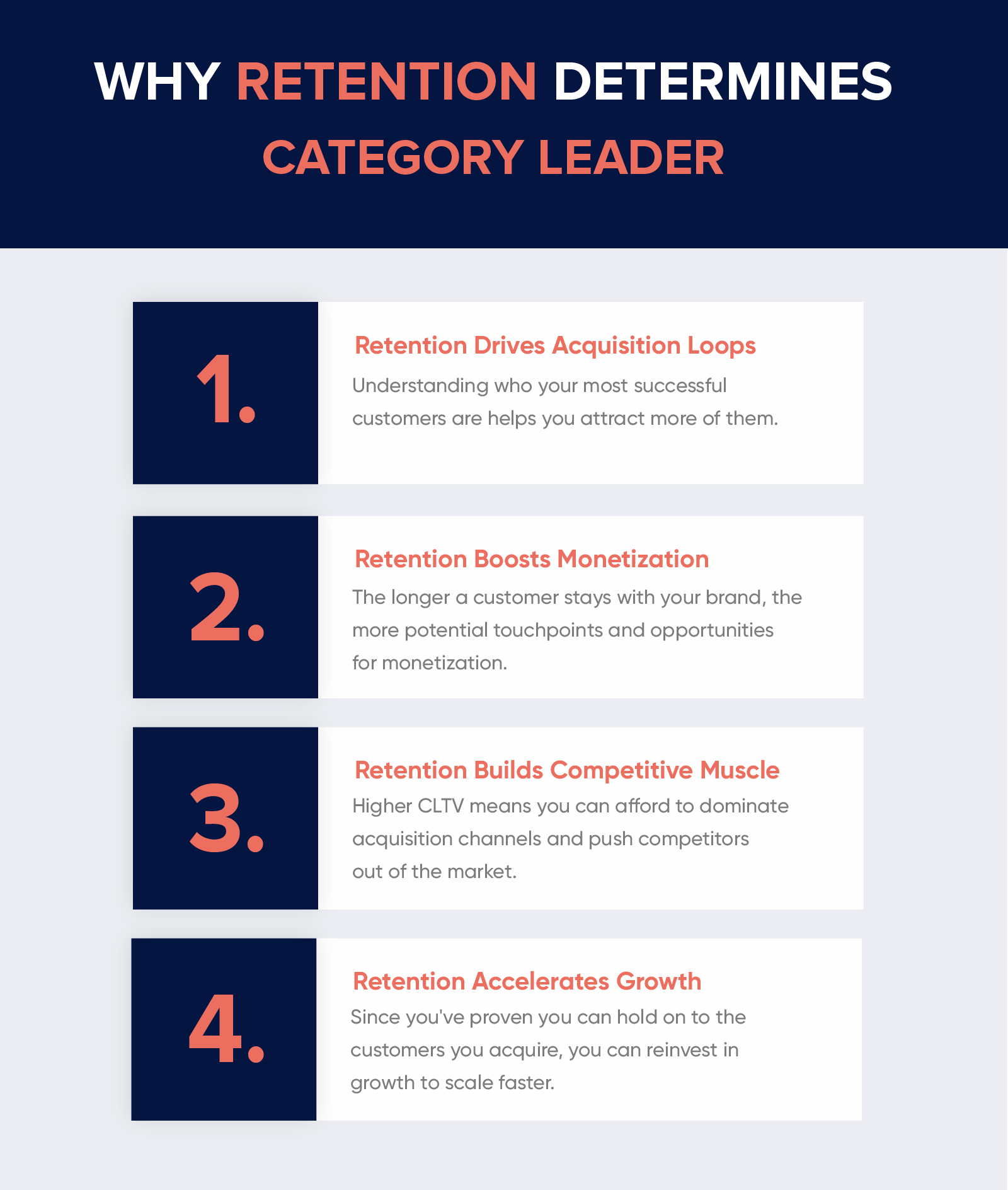 It may seem backwards, but smart customer acquisition starts by prioritizing retention.

Focusing on retention delivers a major boost to business revenue. The longer a customer stays with your brand, the more potential touchpoints for monetization. And the numbers prove it: highly-engaged customers buy 90% more often and spend 60% more per transaction.*

The longer you keep your customers, the more they spend and the more valuable they are to your brand. That higher customer lifetime value means you can afford to spend more on acquisition campaigns — either pushing into new channels you previously couldn’t afford or dominating your most profitable channels to muscle competitors out of the market.

Healthy retention rates mean you have a solid product/market fit. Not only have you built a product that fills your customers’ needs, but you’re also delivering the solution in a way that keeps them coming back again and again. And since you’ve proven you can hold on to your customers once you win them over, you can reinvest in growth to scale your business faster.

How Netflix and Nike Dominate by Prioritizing Retention

Let’s examine how these two powerhouse brands have used strong customer retention to control their industries and become household names.

Word-of-mouth marketing has been an incredibly powerful customer acquisition tool for Netflix.

It’s currently ranked #1 for brands with positive word-of-mouth: over 75% of US consumers aged 18-34 have both heard something positive and talked about the brand with friends or family members in the last two weeks.*

Its social media posts frequently become watercooler moments, keeping the company fresh in the cultural consciousness and drumming up buzz for the brand. Remember the infamous “Who hurt you?” tweet? Or the phrase “Netflix and chill” — which Netflix picked up and ran with on their social media accounts? These viral marketing wins helped reframe the company from simply a new way to watch movies to a social touchstone, maintaining the brand’s “cool factor” and keeping people talking about their service.

Now Netflix is facing some daunting new challenges: namely rising customer acquisition costs in the saturated US market and new competitors like Disney and Apple launching streaming services. That positive word of mouth from existing customers will continue to be invaluable for the streaming giant when it comes to acquiring new users and mitigating rising CACs.

Retention as the Basis of the Netflix Monetization Model

It’s simple: the longer Netflix keeps you as a customer, the more it learns about you, the better it can hook you on its service and upgrade you to a premium tier.

Some even argue* that Netflix’s long game isn’t as a media company at all — but a data company. Think of the massive amount of information it’s collected on what, when, where, and how we all consume content — information that’s likely priceless to everyone from media conglomerates to political campaigns. And the longer it keeps you as a customer, the more it learns about you and the more valuable its proprietary data becomes.

Case in point: when Netflix bought exclusive rights to House of Cards for $100 million, many balked at the price tag and wondered why they would take such an expensive gamble.

But it may not have been such a risk at all. The company knew exactly how many people streamed the entirety of The Social Network — also directed by David Fincher. They knew Kevin Spacey was (at the time) a bankable star based on how many users watched his films. And they knew how well the original British version of the series played with audiences.

So when it came time to market their first major original production, Netflix knew exactly how to pitch it to audiences. They created different trailers for the series based on their key user segments. Users who watched David Fincher’s films saw a trailer that showcased his unique style, for example. Kevin Spacey fans saw trailers that focused on his starring role. Users who watched female-driven shows saw trailers that highlighted Claire Underwood and the other female characters.*

The result? Netflix’s entry into original content was a critical and commercial smash. The series attracted 3 million new subscribers globally, with 86% of all subscribers saying they were less likely to cancel because of House of Cards.* 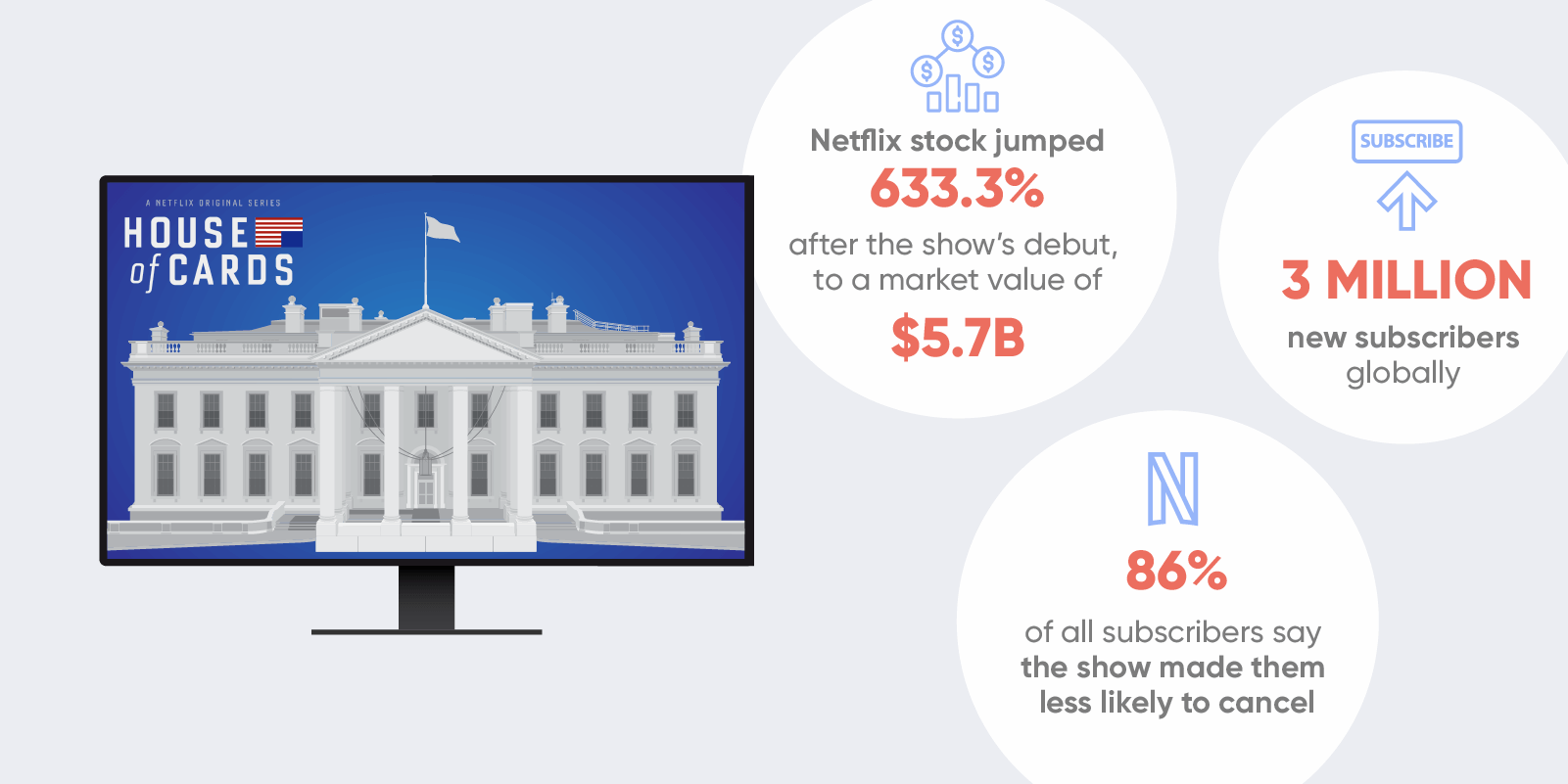 Now, Netflix’s personalization algorithm is said to be valued at over $1 billion per year for its effects on customer retention alone.*

How Nike Turns Brand Loyalty Into A Competitive Advantage

Now we’ll turn our attention to global athletics brand Nike and how it converts its army of loyal customers into market domination.

Let’s look at how much Nike and its primary rival, Adidas, spent on marketing initiatives in the last year. In 2018, Adidas spent 3.5 billion on marketing (14% of its revenue), while Nike spent 3.8 billion (less than 10% of its revenue)*. Because its customer retention and revenue is so much larger, Nike can afford to spend more on marketing than Adidas while eating into less of its profits.

One channel that Nike has conquered is the App Store. Nike’s suite of apps are displayed in featured stories and highlighted as Editor’s Choice apps. At the time of writing, the Nike app has over half a million 5 star ratings. The Adidas app has none of those accolades and only 86k ratings. In fact, search for “Adidas” in the App Store and the #2 result is the Nike app. 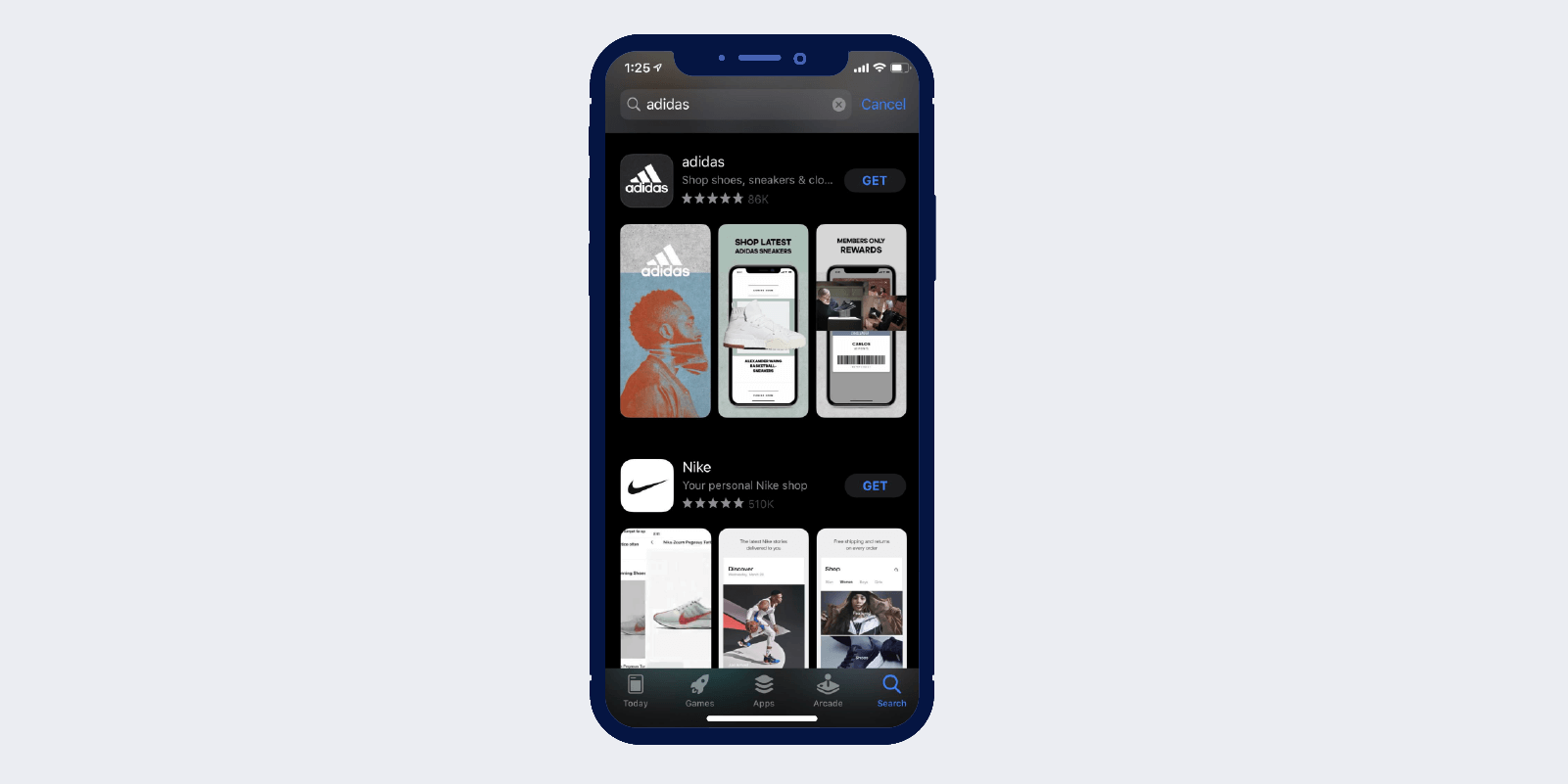 That level of visibility reinforces Nike’s supremacy, driving new users to download their apps and join the NikePlus membership program. To date, over 140 million members have signed up to NikePlus, a number that’s expected to grow to 300 million over the next few years.*

Through its apps, Nike can access a treasure trove of customer data, including their chosen sports, activity level, and preferred styles. And it can use that information to not only offer personalized product recommendations, but inform everything from retail inventory to new product development. The result: Nike says Plus members spend 3x more than guest customers.*

All of this feeds Nike’s market domination. Nike’s total revenue in 2018 stood at $39 billion — almost 50% more than Adidas’ $26 billion. And their market share is more than double Adidas’ at $140 billion.* That’s a lot of sneakers.

Nike isn’t content to rest on its laurels as market leader. They use their advantage to reinvest in their offerings, creating unique digital experiences to deepen customer loyalty and scale its growing direct-to-consumer business.

Nike recently invested in major app partnerships with Headspace, Apple Music, and ClassPass. When users meet their goals on the free Nike Run Club and Training Club apps they can earn free Apple Music playlists or subscriptions. Hitting personal milestones can unlock extras from Headspace and ClassPass, or even custom Nike t-shirts or exclusive products.

These perks are personalized based on what Nike knows about each user’s preferences and habits.* This keeps users locked into engagement with the Nike brand, and they’re more likely to tell fitness enthusiast friends and fellow runners about these unique benefits.

Since launching these partnerships, monthly retention rates on iOS have risen 21.4%.* Nike Run Club is currently the #1 running app in the world, guiding almost 50 million miles each month.*

Want to Grow Your Market Share? Start with Retention

Improving retention is the single most powerful competitive advantage you can achieve. In fact, retention-first brands are three times more likely to increase market share than those who prioritize acquisition.* Once you fully understand the power that customer retention has on every aspect of your business, that fact isn’t at all surprising.

Create campaigns for each stage of the user lifecycle to retain users, drive engagement, and win back lost customers.