From Acquisition to Retention: Dineout’s Journey of Serving Foodies in India

Everyone loves eating out, especially millennials. From first dates to anniversaries, lunches with friends to dinners with family, and employee interviews to office brunches, dining always seems to bring people together. Dining out is an opportunity for everyone to escape and enjoy a special occasion and treat themselves. 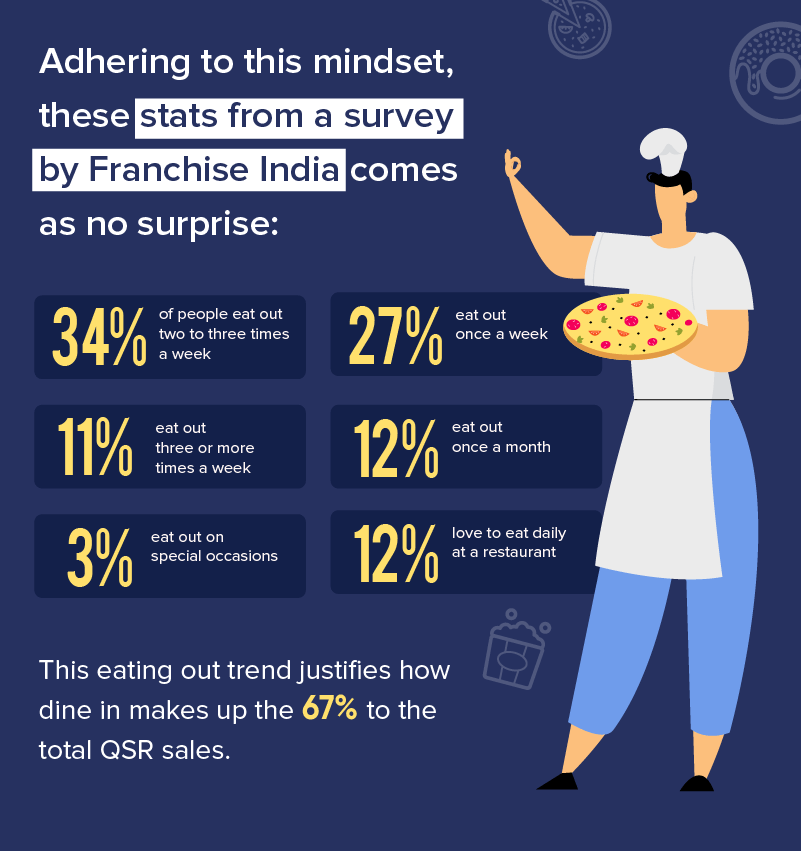 This eating out trend justifies how dine in makes up the 67 per cent, to the total QSR sales.

But reserving a table at your favorite restaurant can quickly become a hassle. With all the call waiting time and mostly unanswered calls, it’s hard to reach the restaurant staff for reservations.

Modern technology has blessed us with apps like Dineout which streamline the process so we don’t have to worry about calling up a restaurant for reservations.

Dineout says, “Foodies Love Us!” and we couldn’t agree more!

The Journey so Far

India’s largest dining out platform, helping more than 40 million diners to discover new restaurants, reserve a table, and offer discounts has been a part of Times Internet Limited since April 2014. 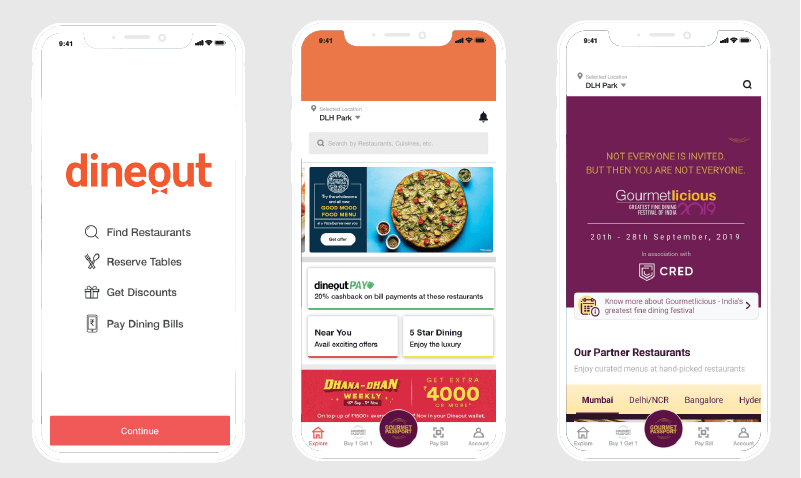 Their mobile app works with an aim of pre-empting and fulfilling the wants of today’s diners. While initially it simply meant allowing diners to reserve a table at their favorite restaurant, in 2016 they expanded with multiple benefits for all dining out needs:

Dineout has its presence in 17 cities and still expanding to other territories to help diners save up to 60% on their food bill.

Curious to find out more about their vision for the future, we connected with Shalini Sinha, the Product Growth Manager at Dineout, to learn how this platform became so successful.

Moving from Acquisition to Retention

Shalini works at the intersection of Product and Marketing teams and takes care of all the product communication. Her core responsibilities revolve around defining audience segments and preferred channels for product communication to improve the target metrics for each quarter. It further includes retargeting users and ensuring repeat users on Dineout app.

Shalini mentioned that earlier Dineout’s focus was mainly acquisition, but with the massive growth they witnessed, they are allocating their focus at retention. Moreover, the ROI from acquisition was seen to be lower as compared to retention. Thus, they realized it’s time to divert their efforts towards retention.

For acquisition, they started giving more weightage to organic efforts as compared to paid. Allocating their efforts in the right direction showed results in a short span of time, when in August, the paid and organic contribution to lead gen became 25% and 75% (respectively) and compared to 40% and 60% in January.

Boosting users from 123 million in 2014 to 167 million by 2015, coupled with budding ecommerce market, the food tech market in India is anticipated to grow at a robust pace during the forecast period. However, it’s important to have a 360 degree engagement approach to retain customers as well as onboard app user. Consumers are impatient and because of high competition in the industry, the chances of them hopping from one app to another are high. Simply put, brands have to be on their toes all the time to retain users. And the same applies to Dineout.

Dineout led a research based on their feedback campaigns. This research showed a massive education gap which needed to be filled to improve retention. This gap did not apply to all users, but a certain set of users — mostly those who haven’t completed any transactions or made any reservations on Dineout. The research highlighted that the retention rate for these users was noted to be low majorly because Dineout didn’t inform them about their other features/benefits besides reservations.

Shalini added another metrics for month-over-month tracking along with Acquisition Rate, CTR, and Average Transaction Value. It was necessary to track these metrics to understand if their efforts are paying off or if any optimization is needed.

In order to retain customers, users need to be understood and treated (engaged) uniquely. For this, Dineout leveraged CleverTap to build a unique user journey for each user with tailored communication channels.

Dineout began exploring all communication possibilities with CleverTap starting with segmentation and personalization.

Shalini mentioned that even before collaborating with CleverTap, they had been trying to put a strong foot in the area of user retention, but because the personalization and segmentation possibilities were very basic with the other tools they used, no significant change was witnessed.

When a brand is aiming for user retention, segmentation is a non-negotiable. It’s never recommended to do mass-retargeting as you usually end up with churn. Here are a few push notification best practices you can refer to.

With CleverTap, the team segments users based on multiple attributes, such as behavioral, psychographic, recency frequency monetary (RFM) or can even live user segments.

Segmentation has played an amazing role in terms of communication. Dineout is now able to make sure that uninstallers receive a different message from active users or even those who have been active, but haven’t been active in the past few days. Simply put, it became easy for them to trigger relevant messages to the right users at the right time.

Adding Another Layer of Personalization

Before, the team was personalizing on a very basic level — leaving a lot of communication gaps. Personalization has now expanded to the locality users are searching in, their wallet amount, and more. 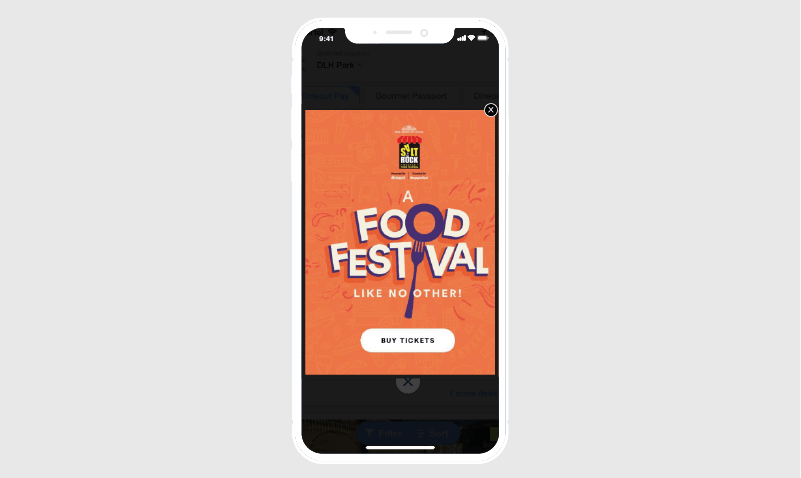 ii) More repeat users
Dineout was already at 80% of repeat users in flash campaigns, so they targeted the remaining 20% based on the last restaurant they visited.

With all these possibilities coming in, the picture has completely changed for Dineout.

When we asked about their favorite CleverTap features besides segmentation and personalization, Shalini mentioned Analytics.

She added that especially for non-tech people, it’s very convenient to get their hands on CleverTap Analytics to understand and extract relevant data around their success metrics.

She also mentioned CleverTap Funnels which are being extensively used by the team to understand screen drop off and push campaigns.

“While Google Analytics has funnels, it lacks funnel conversion as a metric. CleverTap gives a clear picture of metrics like transacting user vs non-transacting users.” – Shalini, Dineout. 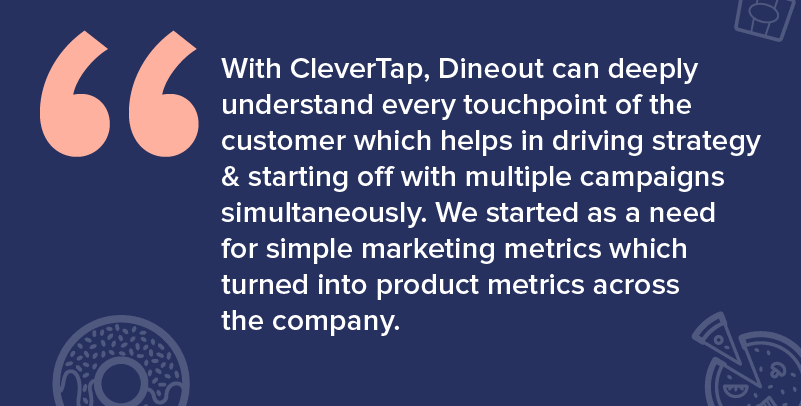 Dineout is now focusing more on action and communication based user engagement. With their experimental mindset, they plan to keep prioritizing user retention, leveraging CleverTap features like segmentation, funnels, personalization, and extend it further to recommendation and intent-based targeting.