NPS Metric: Why Your App Shouldn’t Just Rely On This Measurement

If you’ve ever answered the question “How likely is it that you would recommend our mobile app to a friend or colleague?” Then you’ve come across an NPS survey.

It’s a popular way for brands — and many mobile apps — to measure customer sentiment and satisfaction, because it’s as easy as asking the customer to rate the app on a scale of 0 to 10. All the customer has to do is click a number.

But just what is this metric about? And how effective is it in truly measuring growth and customer satisfaction?

The NPS metric (which stands for Net Promoter Score) is a scoring system for quantifying how pleased a customer is with your product or service. The answer is usually graded on an eleven-point scale from 0 (Not at all likely) to 10 (Extremely likely).

The actual Net Promoter Score is a number from -100 from 100. This means a score higher than 0 is considered good. Scores above 50 are considered excellent. And those above 70 are world-class.

Each industry has an average score depending on how customers rate the brands in that vertical. Here are some industry averages:

NPS scores are tracked over time to show how the customer experience improves from milestone to milestone.

The Net Promoter Score was first developed in 1993 by Fred Reichheld, but would rise to prominence in 2003 with Reichheld’s article in HBR positing that any company could determine the loyalty of its customers with just one question. It would later be adopted by Bain & Company and Satmetrix as a means to predict whether customers would bring more value to companies.

Today, it’s so entrenched in companies that it’s common to hear executives bragging about NPS scores on earnings calls.

Customers who respond to an NPS survey can be grouped into three categories depending on the score they give. 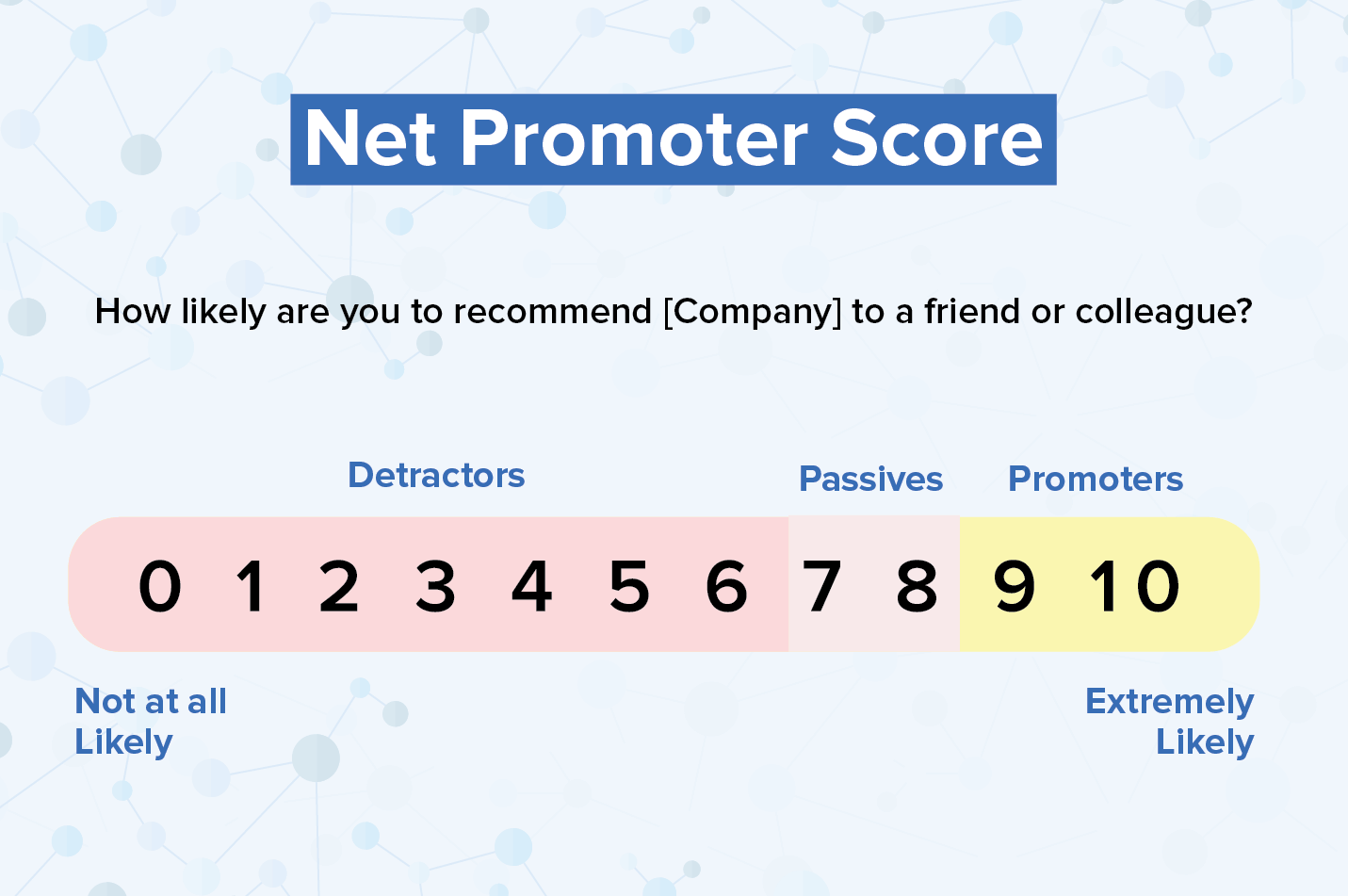 After customers rate your product from 0 to 10, what goes into the actual Net Promoter Score calculation?

Passives count toward the total number of respondents, which decreases the percentage of detractors and promoters and pushes the net score closer to 0.

Why Use the NPS Metric?

It rose to popularity as a metric for customer satisfaction and growth because it turns out that there is a correlation between a company’s growth and high NPS scores.

On average, companies scoring high in an NPS survey grow more than 2x the rate of their competitors.02

If you look at the Fortune 500 list, you’ll see that for the most part, the NPS scores back up the position of these companies on the list.

Here are just 10 examples of some well-known brands on the Fortune 500 plus their NPS scores. Some of them have an almost cult-like following with the customer retention numbers to back it up.03

Three Different Ways to Use NPS

Here’s something else that may be surprising to those new to the idea of NPS: there are three different ways you can use the Net Promoter Score.

The NPS can be used for building a competitive benchmark. This means seeking feedback from your customers as well as your competitors’ users.

The result: you gain a more objective view of the competitive landscape. Compare your app’s feedback with that from your competition and use it as a basis for formulating a game plan on how to improve.

You can also use NPS to gather feedback from users by asking them whether they would recommend your company to their network. This feedback gives you a measurement of current user sentiment. By far, this is the most popular usage of the Net Promoter Score.

The third way you can use NPS is to ask for user feedback after selected experiences. For example: you could send the survey after the user makes their first purchase or anytime they interact with customer support. This allows you to see how those experiences affect overall customer loyalty and sentiment toward your brand.

What Are the Drawbacks of the NPS Metric?

With all of the good things going for NPS, is there a need to be wary about using it as a gauge of customer satisfaction and retention?

Turns out there are a bunch of studies that criticize NPS as a metric having a lot of weaknesses.04

Some of that criticism includes:

1. NPS Has No Internal (or Mathematical) Logic to It

Why an 11-point scale from 0 to 10? Why not simply a three-point scale (yes, no, maybe)? With 11 points to choose from, and no real clarification as to what constitutes a rating of 3 versus a 4 versus an 8, your users are left to interpret the scale as they see fit.

In fact, a study testing a fully labeled 7-point scale showed that it was a more efficient and effective measurement of the likelihood of recommending.05

Furthermore, why does it have to be a difference score (i.e., %promoters – % detractors)? When you use the Net Promoter Score calculation you’ll see that if all users rate your app a 4 then your NPS score will be an abysmal -100. But if you make massive changes to your app and all your users subsequently rate you at 6, you should break out the champagne and rejoice, right?

Unfortunately, no. It will still be at -100. Any average score below 7 will give you a score of -100. No matter how you’ve improved.

Action: Continue to use NPS if you find it useful. But in addition, use metrics that don’t use difference scores to summarize survey data. Traditional summary metrics such as mean or top/bottom box scores should do the job nicely.

An additional drawback of the NPS metric is that it measures a user’s current sentiment and uses that as a predictor of future intent and behavior.

Just because a user feels great about your app right after an aha moment that has them seeing the value of your app firsthand doesn’t necessarily mean the user will end up a brand evangelist.

Using NPS as a predictor of user behavior (especially purchase intent) is risky. And not many brands consider this aspect.

Action: Instead of the NPS score, use RFM analysis (Recency, Frequency, and Monetary Value). It’s a better predictor of future engagement and CLTV based on how recently a user made a purchase, how often the user buys, and how much the user spends with each purchase.

3. NPS Asks Only One Question

There is no scientific evidence that NPS’ “likelihood to recommend” is a better predictor of business growth than other similar questions surrounding customer loyalty (e.g., questions about overall satisfaction, or the likelihood to purchase again).06

And in an article in Quality Progress, Bob E. Hayes argues:

There are other questions that can be asked in tandem with the NPS question. (For example: What is your overall satisfaction with the product? How likely are you to purchase again? Did you refer our app to anyone in the last 30 days?) All of them building a more complete and a more reliable picture of customer satisfaction than just one.

Action: In addition to your NPS survey that only asks one question, be sure to run a regular customer feedback questionnaire to ask about specific features of your product or specific portions of the customer journey.

4. NPS is a Lagging Indicator

Even if you send out the survey immediately after releasing an app update, it could take a while for your customer to get used to the features of the latest update. You won’t see the NPS score improve until the customer changes their overall opinion of your app and until you send the next survey.

This is one reason why companies send out the NPS survey multiple times throughout the year. To keep the metric updated.

Action: If you want to test variations of your UI or specific features, consider designing an A/B test to see if one variable is more appealing than another, you can get feedback instantly.

While it’s useful to see how your users feel about your brand right now, there’s a huge problem when it comes to prescribing the next steps of your product team.

“Well, the majority of users have rated us a 2. So… umm, what do we improve first?”

The data you receive from an NPS score is only useful as a gauge of whether your brand is being perceived in a favorable light. It won’t point to which app features, marketing messaging, or other aspects of the user experience need improvement — things that a product or growth marketing team need to have in hand.

Action: Once again, if you want more actionable data, use customer feedback questionnaires. They’re simple to create and collate, and they shouldn’t take long for a user to complete. Keep it short and simple so you get better response rates!

Should You Use the Net Promoter Score for Your App?

Overall, the Net Promoter Score is useful for a bunch of things:

But using it to reliably predict growth, purchase behavior, and even referrals?

It’s risky to depend on just one question as a metric for success. Especially since there are other, better metrics you can rely on to effectively predict growth.

Use the NPS metric, by all means. But use it with caution, knowing its limitations and risks. And for goodness’ sake, don’t hinge all your UX improvement efforts on it.