What is Hypergrowth and How Can You Achieve It?

Hypergrowth is the holy grail for many entrepreneurs and investors. And understandably so — who wouldn’t want their company to experience rapid, exponential growth that catapults them to a unicorn-esque exit?

However, hypergrowth can also come with a set of challenges that can tear a company apart just as quickly as it can launch them into orbit.

Here’s what you need to know about hypergrowth – plus the strategies that the fastest-growing companies use to survive the rattling rocketship ride.

Hypergrowth is a phase of rapid expansion companies experience as they scale – specifically, where a company’s compound annual growth rate (CAGR) is 40% or greater.1,2

The term “hypergrowth” was first used by Alexander V. Izosimov in a 2008 issue of Harvard Business Review to describe, “The steep part of the S-curve that most young markets and industries experience at some point, where the winners get sorted from the losers.” 3

Here’s what that looks like on the growth curve of a startup: 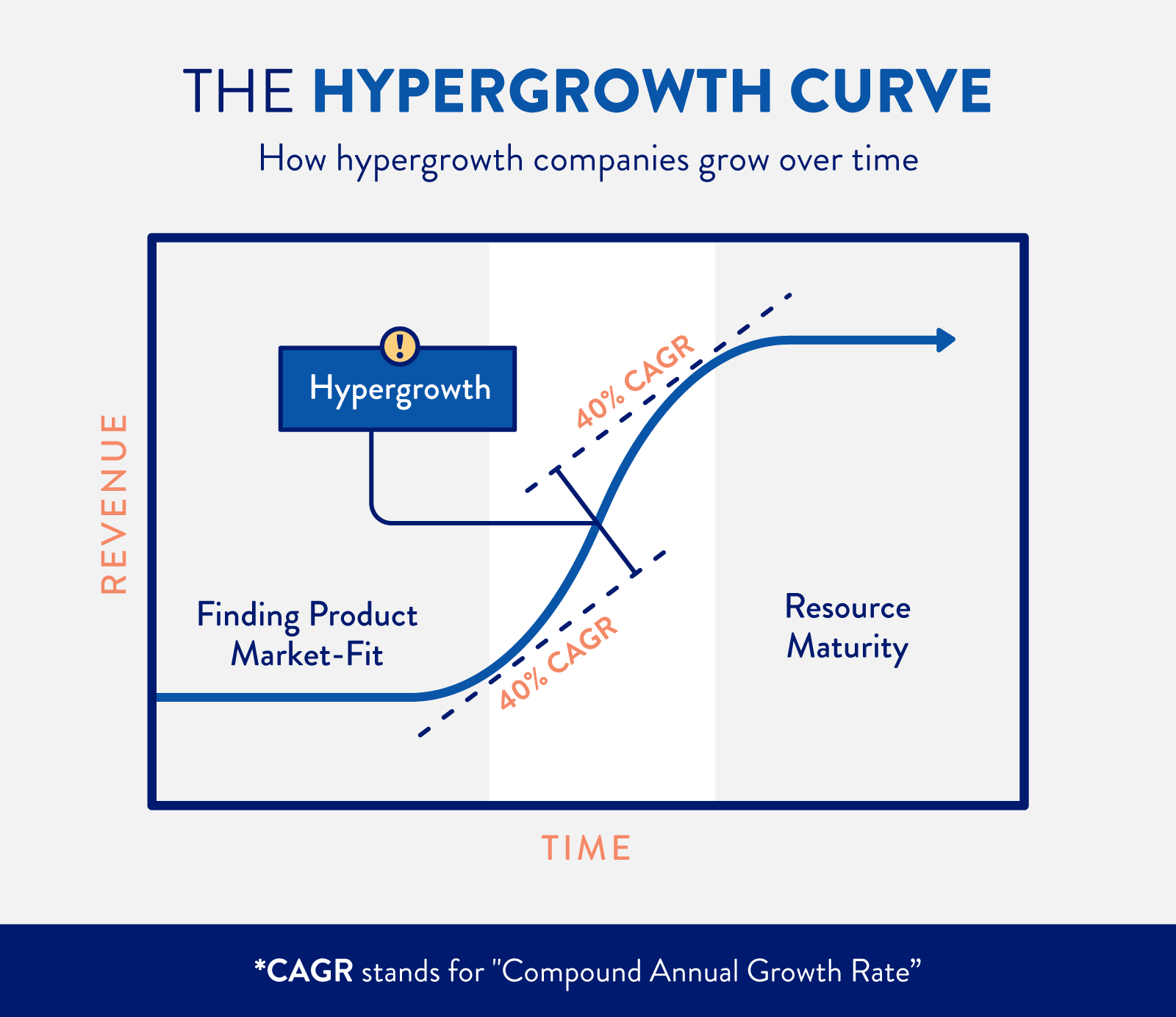 In terms of the 5 stages of business growth, hypergrowth happens in Stage 4, once product-market fit has been achieved.4 However, not every company that goes through Stage 4 and reaches maturity does so in hypergrowth.

Since hypergrowth is driven by market demand, if the demand isn’t there, growth might occur, but at a CAGR less than 40%.

However, companies can influence the market and create demand with the right activities and strategies. Here are some strategies that the fastest-growing companies have used to fuel (and survive) hypergrowth.

The World Economic Forum surveyed 200 high-growth businesses to understand the unique priorities of companies that are experiencing hypergrowth vs those that are not.5 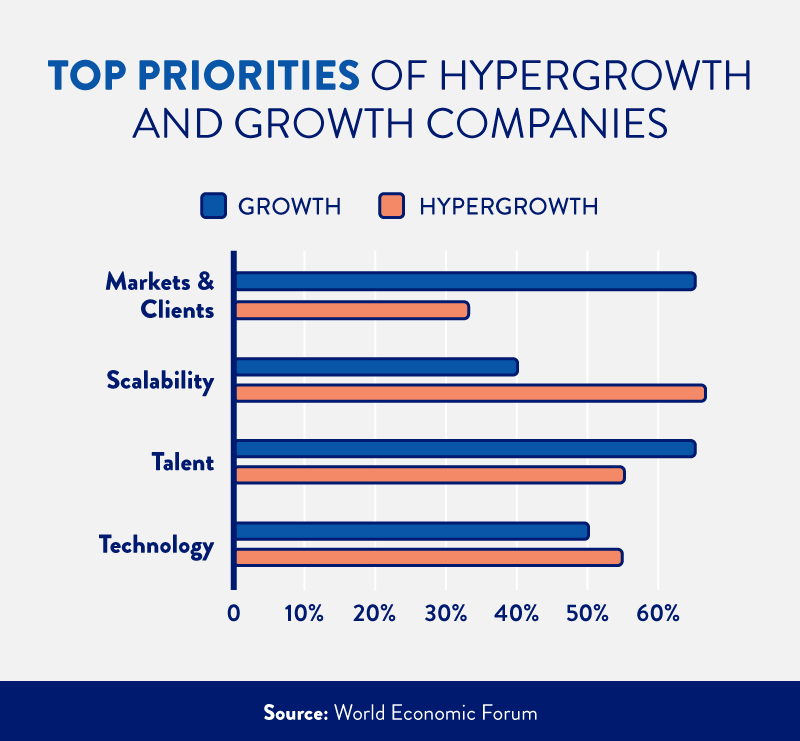 Since hypergrowth is driven by market demand, an innovative product or service can drive an increase – often by creating an entirely new market altogether.

“Companies with a PLG strategy rely on product features and usage as their primary drivers of customer acquisition, retention, and expansion. It’s through this strategy that companies are able to grow faster and with less cash.”

Example: Slack becomes a $1.1B company before hiring a CMO

Slack is the fastest growing app of all time and a quintessential example of how an innovative product can drive market demand.7

Their platform completely changed the way companies collaborate internally, allowing them to store their history and search through it in an intuitive way that wasn’t possible before. This is one of the features that drove Slack’s ambitious goal to kill email.

Their “email killer” was so groundbreaking that it fueled hypergrowth almost entirely on its own. The company was valued at $1.1B before it ever hired a CMO or sales team, and revenues grew from $0 to $4B in just 4 years — mostly on word-of-mouth in places like Twitter.8

Slack understood that when employees start collaborating on their platform, their entire organization or network gets pulled into the tool. Slack made the invitation and join process quick and easy to capitalize on this user-generated demand.

Groundbreaking innovation – the kind that drives hypergrowth – is rarely born out of thin air. It’s more often wrestled out of a careful analysis of customer data.

Slack was no exception. Steward Butterfield, Slack’s founder, made it his goal to actively listen and incorporate customer feedback into their product development. Though the initial idea was groundbreaking, it was these lessons and feedback incorporated from early adopters that made it possible for them to achieve hypergrowth.9

So no matter where your business is on the growth curve, taking advantage of the metrics and data available to you from your users is essential for moving up and to the right.

These metrics are key:

Keep in mind, however, that the numbers alone won’t tell you the whole story – it’s just as important to qualify them anecdotally, as Airbnb did.

One of Airbnb’s keys to success is their ability to effectively apply metrics like those above.

But Airbnb understood that to truly understand their customers through their data (what they liked/disliked, etc.), they had to understand the context in which the data originated.

As Riley Newman, Airbnb’s former Head of Data, put it:10

“Data isn’t numbers, it’s people… it’s the voice of our customers. A datum is a record of an action or event, which in most cases reflects a decision made by a person. If you can recreate the sequence of events leading up to that decision, you can learn from it; it’s an indirect way of the person telling you what they like and don’t like.”

By interpreting what that data was telling them with real customer stories, they were able to use it more effectively to make intelligent business decisions that drove massive growth.

According to the World Economic Forum’s survey, most hypergrowth companies face their greatest challenges when they have to scale their business. 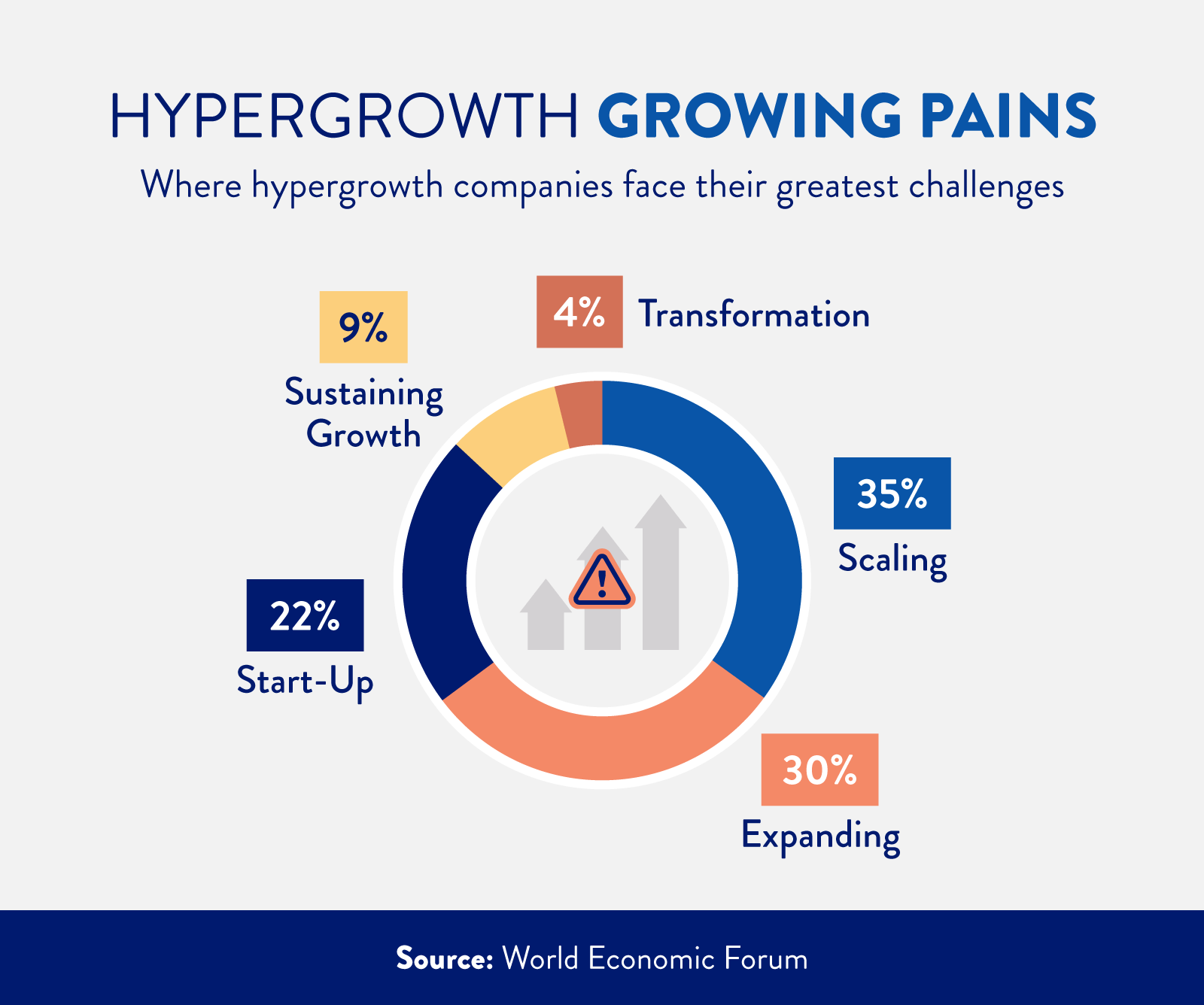 The reality is, what works for a small organization may fail once that organization grows. So developing effective business systems that succeed at scale is a critical piece of surviving hypergrowth.

Up until late 2013, you had to physically go into a local Uber office and fill out paperwork to become a driver. But as the company grew, this process became too slow and cumbersome for scaling into new cities quickly.

So Uber analyzed their in-office application process and designed a web portal that allowed new drivers to sign up and obtain approval from anywhere.

However, as they continued to expand internationally, differences in regulations between countries rendered this process less effective. And they had to design yet another version in order to fuel further growth.11

Strategy #4: Focus on culture and mission

Working at a startup is stressful – the average turnover rate for the tech industry is 13.2% (the highest of all industries), according to a study by LinkedIn.12

However, it’s really difficult to achieve (much less survive) hypergrowth if you are constantly replacing team members.

That’s why culture and mission are some of the most important tools entrepreneurs have in their arsenal when they are in hypergrowth. Even in the face of adversity, research shows that a mission your team believes in keeps them engaged and productive.

It also shows that it’s a critical piece of keeping up with the rapid expansion your organization is experiencing. 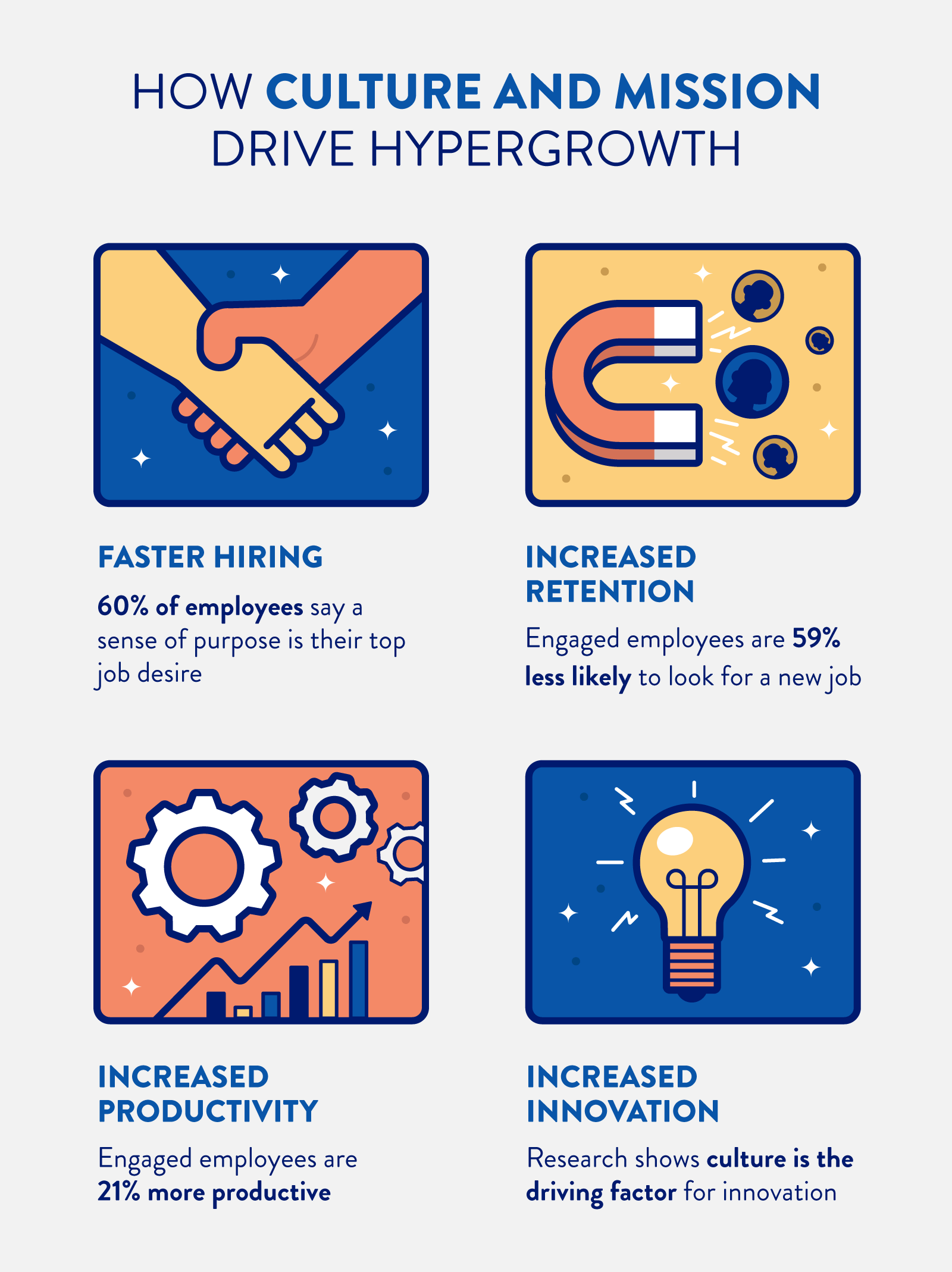 In 2013, Bitcoin was surging and Coinbase was hiring like crazy to keep up.

In less than a month after peaking at $1,150 per coin, the price plummeted by more than 50% and stayed there for almost 4 years.

But unlike what usually happens at companies when the market takes a turn, few people left.

In fact, according to Khalid Halim13, executive coach to Coinbase’s CEO, many stayed (even in the face of heavy personal losses) because they shared a common belief:

“If you spoke with the leadership team and employees at that time, they believed in an open financial system for the world and that it was only a matter of time before the world changed. They were determined to be a part of that, even though, I’m sure, many owned Bitcoin and lost significant personal wealth.”

The result? The company grew 216.7% YoY over the next 3 years – and avoided many of the problems (insider trading, security breaches, etc.) that have plagued other cryptocurrency exchange platforms.14

Growth loops are closed systems where the inputs generate more of an output that can be reinvested in the input. Think of them like snowballs: once you get them rolling, they pick up speed and size all on their own.

There are many different types of growth loops that serve different value creation, including new user acquisition, user retention, and more. Take our mobile growth quiz to determine where you have opportunities to implement them for your business!