Some of the status quo trends in tech are beneficial to the industry as a whole, like two-factor authentication in mobile app security. Others are seemingly adopted because they have become the industry standard, no matter how annoying they are.

The guy who invented pop-up ads even came out with a public apology after the feature became widely used and arguably abused.1

So what trends in mobile app marketing should we be sure to use strategically? We decided to ask which features users find the least useful, and the results may surprise you.

As it turns out, if you want to keep users engaged and retained, step one is to not annoy them.

Keep reading for the results of our survey, or jump to our full infographic below.

UX Through the User’s Perspective

Although many mobile marketers and product managers believe they understand what users want, it’s likely that they put more trust in their expertise and industry standards than actual discussions with customers. This is a common cognitive bias known as the curse of knowledge.2

Similar to understanding the RFM (recency, frequency, and monetary value) of your customers, you should conduct an RFM analysis on your features.

This will indicate which features your users find indispensable to your app’s experience and which could be improved. Below are the results from our survey of which in-app feature users find the least useful: 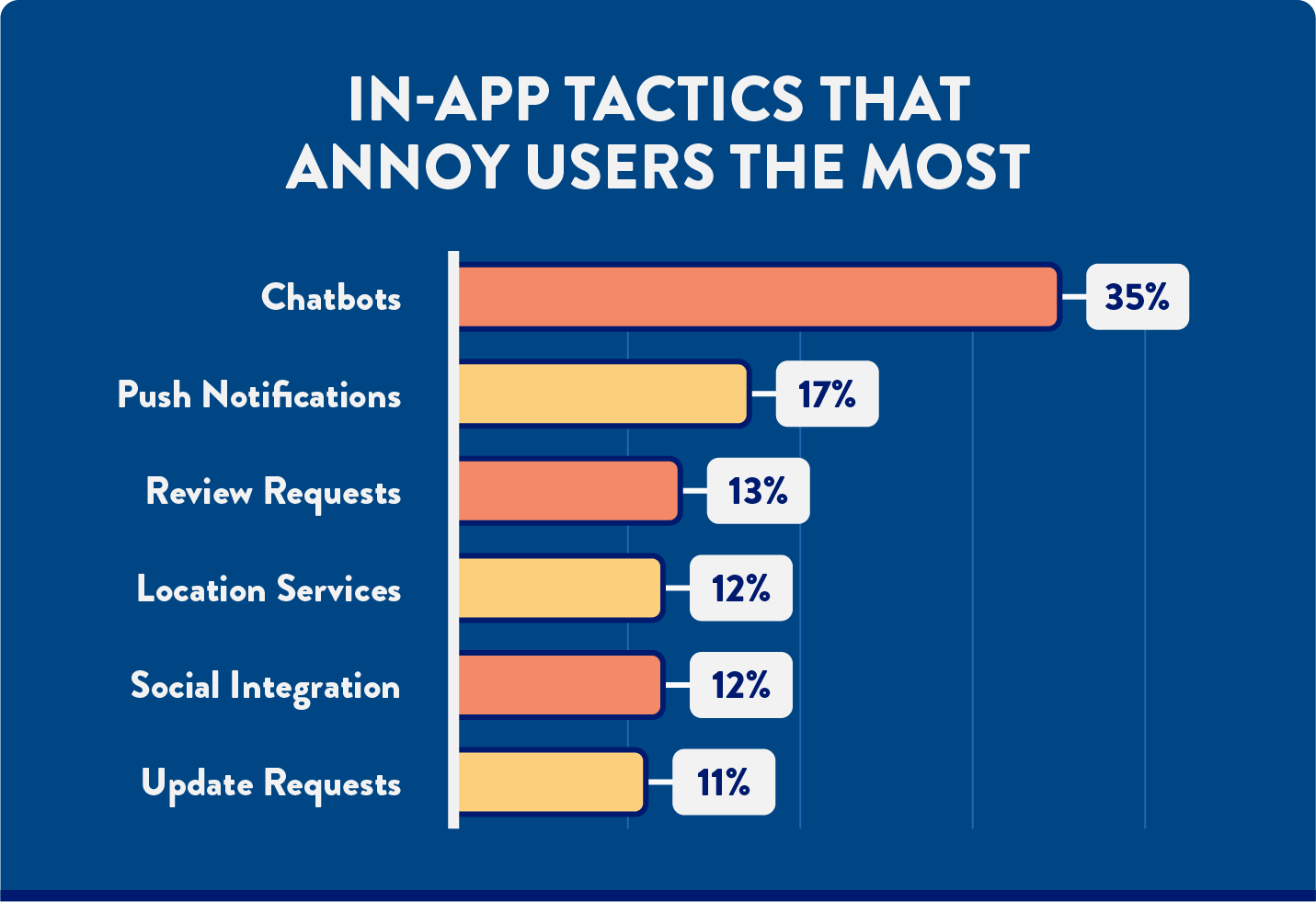 Chatbots: 35% of Users Find Them the Least Useful Tactic

Even though the field of natural language processing has been evolving in recent years, users still don’t find chatbots to be useful enough. In fact, they find them 2x more annoying than any other in-app feature.

Unfortunately, chatbots are growing in popularity. On average, 18% of businesses currently have a chatbot enabled while another 12% of businesses have plans to use one in the next 12 months.3

Perhaps users can’t seem to say the right things to make the chatbot work properly or they would rather interface with a human.

Maybe someday, as the field of AI progresses, chatbots will become tools everyone agrees are indispensable. But until then, with the majority of people citing chatbots as the least useful app feature, it’s clear we need to reconsider using them.

Drift, a company that actually creates chatbots, attempts to solve your problem and answer your questions with a bot, but if unsuccessful they pass the conversation on to a real human. This personal touch is a powerful way for digital companies to harness and build trust with users. 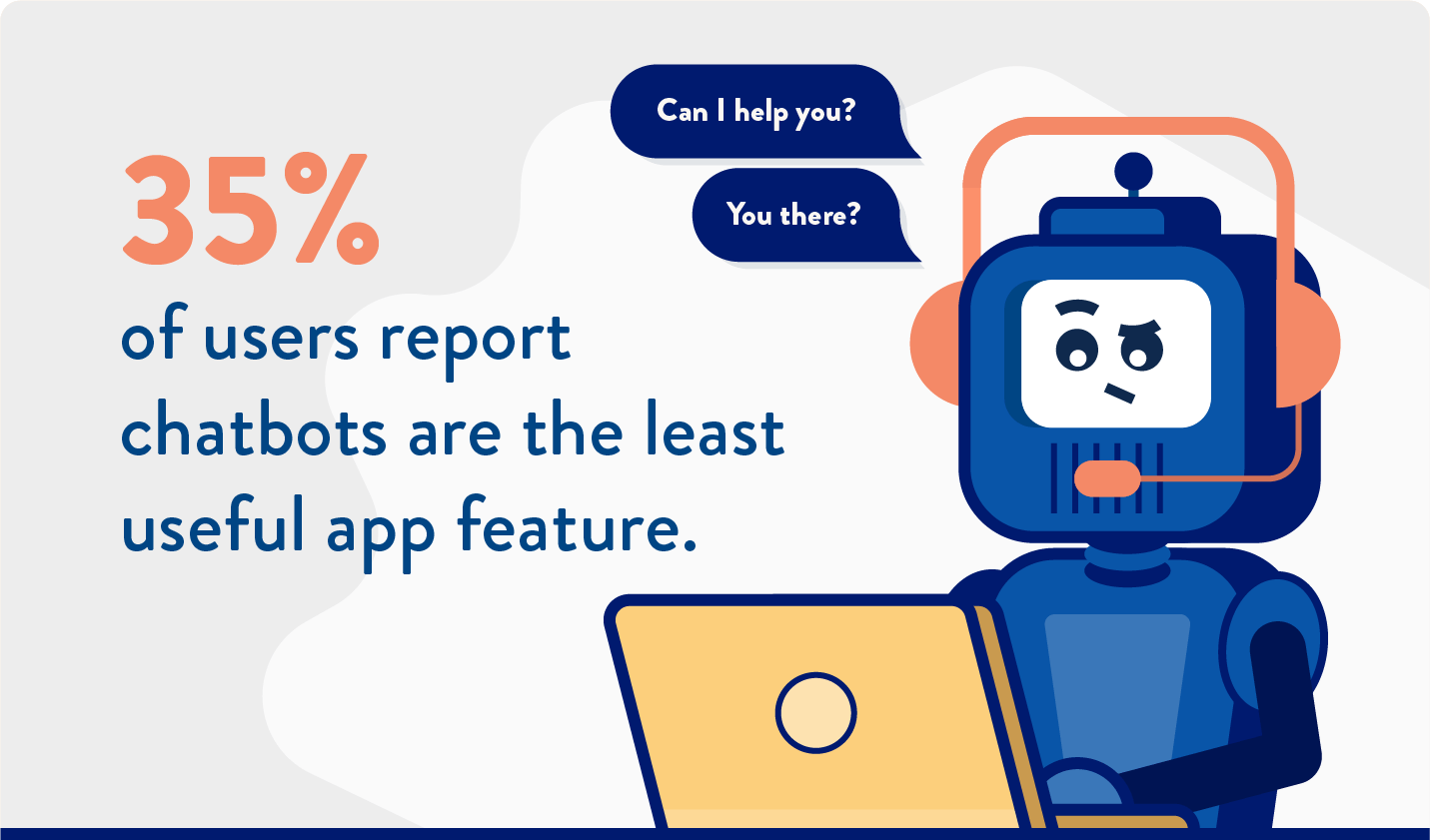 If a chatbot is your only method of support for users, you run the risk of alienating a large percentage of users that don’t care to use your chatbot.

If you do have a chatbot, include a footnote citation — we’ll call it an escape hatch — with other helpful resources for connecting with the support team or otherwise solving their problems. Depending on the scale of your business this could be a simple FAQ page, a direct email address, or a phone number for 24/7 human support.

How Users Feel About Other In-App Features

It’s clear that chatbots annoy users the most, but how do they feel about other in-app features? Less than one-fifth of respondents report being annoyed by push notifications, review requests, location services, social integration, and update requests.

This is likely because these features can be extremely useful — when used properly.

Push notifications can be one of the highest converting mobile engagement strategies. If your app is built on time-sensitive media, push notifications allow you to quickly alert users to, say,  breaking news headlines or package delivery status, and offer a way to quickly read more details.

If you are sending too many push notifications, at the wrong time, and with zero added value to the user, it’s likely your users will disable these notifications. This can quickly snowball to an uninstall.

TIP: Only push value to users

For example, Cleartrip, an app to manage travel plans, sends relevant and valuable push notifications with status updates for delays, changes, and other vitally important info.

Many users understand that reviews and ratings help others discover amazing apps (like yours), as well as warn people of problems they are likely to encounter (hopefully not yours). Unfortunately, there isn’t much incentive to take the time to write a review.

As mobile marketers, we often need to request help from our users, but walk a fine line to avoid annoying them.

For example, using referral marketing strategies to ask users to refer a friend. Even if you are able to incentivize users to invite friends, you’ll want to avoid asking over and over again.

One way to lessen the impact of repeat requests is to change up the channel for making the request. If you previously asked for a review in an in-app message, try making a second request via email.

Ratings and reviews are important.

What’s more important, however, is delivering on the product or service your users came for. Only when you have successfully achieved this should you ask them to write a review.

We can’t imagine anything that would drive users to leave a poor app rating and a negative review more than being asked to leave a review immediately after the app fails to deliver on their needs.

TIP: Don’t annoy users by constantly pestering them to leave a review. We tend to agree with Apple’s policy to not ask for a review more than 3 times in a 12 month period to avoid irritating users. 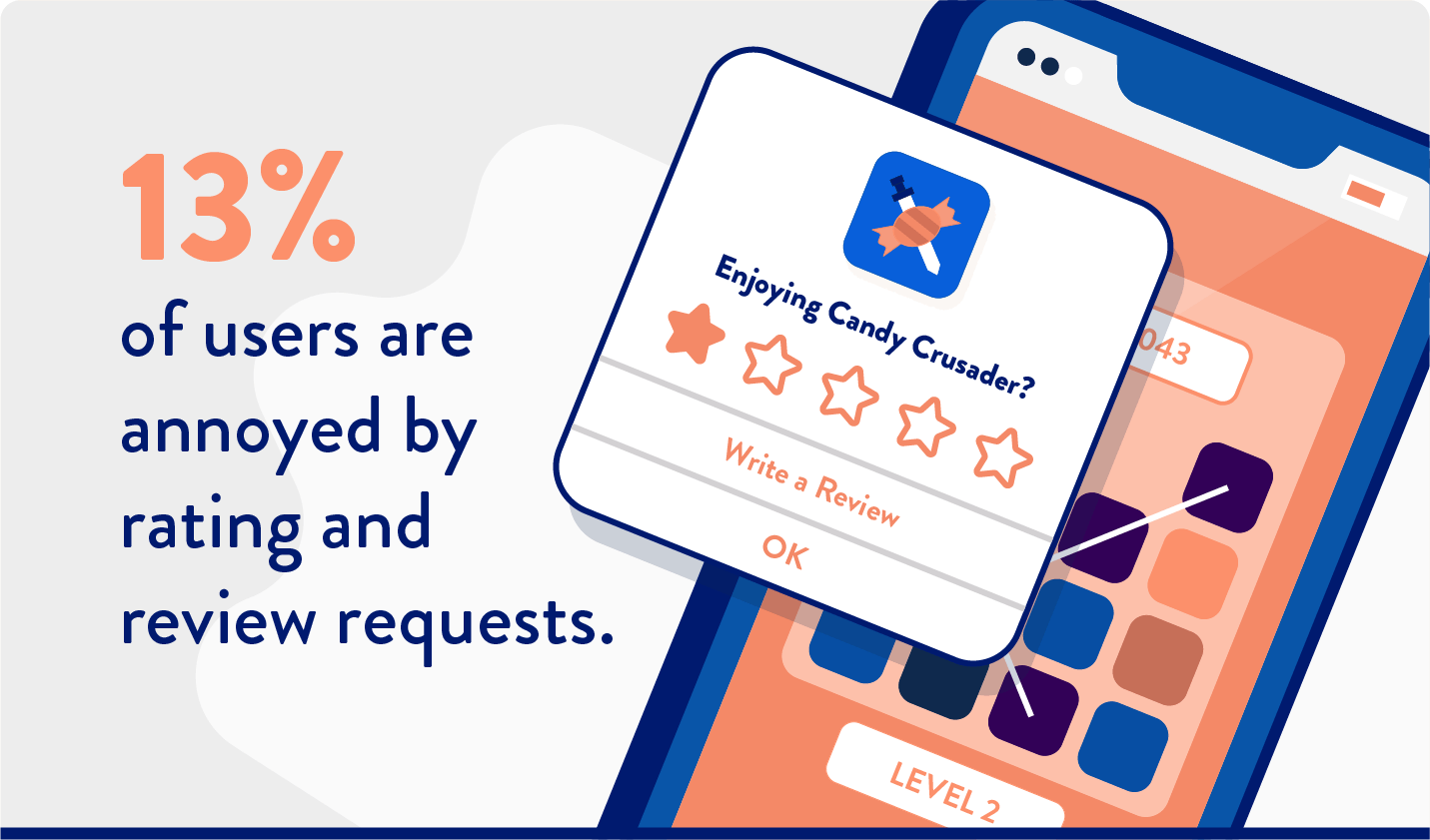 There are many other little things that people find irritating when using a mobile app. For those most concerned with privacy, requests to enable location services are not taken lightly.

One feature that is often not required for most apps to function properly is social integration. Many people worry an app will share to social without their knowledge or consent, which is presumably why 12% of people find this feature annoying.

Unfortunately for app developers, 11% of people don’t want to update their app after download. This could be for a number of reasons. Perhaps the majority of users aren’t encountering any of the bugs you were determined to fix and they are of the mindset, “if it ain’t broke, don’t fix it.”

Or users might just be too lazy to update the app. 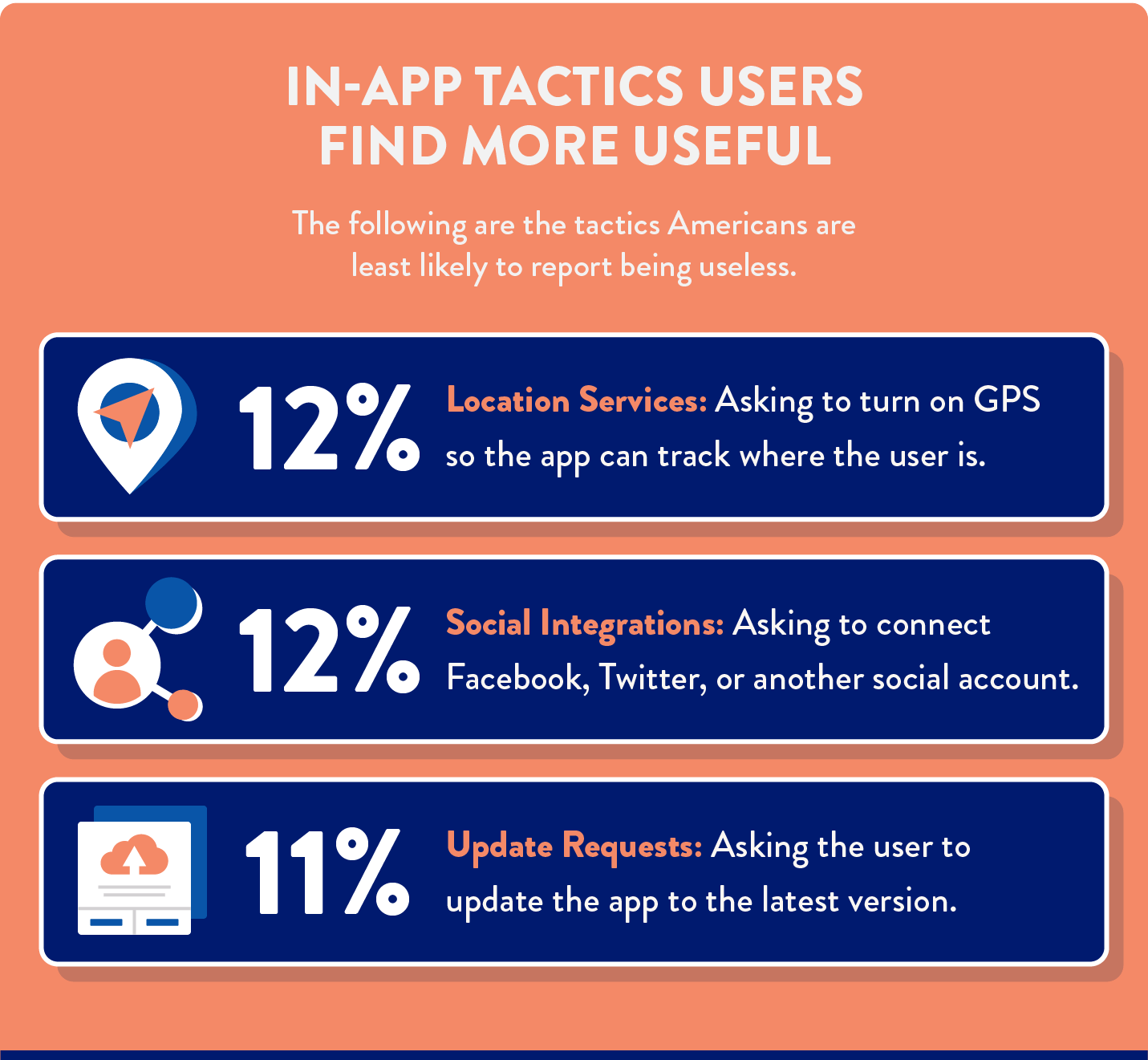 While we can’t solve for laziness, we can offer tips to help reduce the chances of users becoming frustrated with some of the more extraneous features of your app.

A breaking change is one where a single change within the source code results in many other unexpected changes (usually in the form of bugs) within the app.

If you release a new version and only a small percentage of users actually update the app, will this negatively impact the network?

Let’s assume, for example, Instagram had rolled out support for video in an app update, but it’s backward compatibility was limited — meaning video wouldn’t work for older versions of the app.

So when a famous influencer posts a video, only some of their followers are able to view it, while others are shown a black screen. This would be an example of a breaking change within the app’s update.

It’s important to always ensure your app has backwards compatibility. Much like when testing the OS compatibility, you must ensure your software runs on outdated devices, browsers, and even previous versions of your app.

We posed a question to 1,000 Americans using Google Surveys between October 31 and November 2, 2019. We were interested to learn which app features the general population feels is the least useful.

While we do not recommend you immediately remove these features and tactics from your mobile marketing strategy, we do advocate you think differently about how they are implemented and used.

The goal of any mobile marketer is to acquire, engage, and retain users to increase customer lifetime value. If you are interested in learning more about optimizing your mobile marketing strategies, check out our case studies, webinars, white papers, and other resources.