User ratings are important. So important, in fact, they often play a crucial role in people’s purchasing decisions—be it restaurants, movies, or apps.

But getting ratings and reviews is no easy feat — unless, of course, you have an unhappy user on your hands.

While 76% of apps are rated four stars and above in the App Store and Google Play store, the majority of these ratings didn’t just happen because users felt like sharing their input. More likely, there was some behind-the-scenes legwork that went into collecting this positive feedback. And you’ll need to learn it if you want to boost app store optimization (ASO).

In this article, you’ll learn how to help your mobile app land positive ratings and more of them.

What Are App Ratings?

App ratings are one to five-star clusters that live under an app name in the App Store or Google Play store. When browsing or searching for apps, app ratings are the first contact potential users have with your product aside from the name and app icon.

But app ratings are much more than just a first impression for potential users. They’re also an important part of app store optimization, plus a way for users to give feedback on their experience, request improvements from developers, and help others decide which apps to try.

When app ratings were first introduced, having a five-star app was a badge of honor.

However, as most users now know, ratings depend on the circumstances. A five-star rating doesn’t mean as much if you only have one or two reviews.

On the flip side, having less-than-stellar app ratings raises a lot of questions about the app’s ability to deliver and often leads to users researching a competitive product, which is why a higher rating certainly gives your app a competitive advantage.

Why App Ratings Are Important for ASO

ASO, similar to search engine optimization for websites, is the process of optimizing mobile app pages to achieve a higher ranking in app store search results and top charts. One of the components the app stores use to rank search results and organic discovery features is app ratings and reviews.

Your potential users have an abundance of options and since we are still social creatures, most of us turn to app ratings before deciding to download. Standing out in a competitive crowd with positive social proof is the most obvious reason to prioritize app ratings.

Of course, not all ratings and reviews hold the same weight.

Volume, freshness, and type of rating are considered, which is why you need to establish a framework for generating ratings on a regular basis, replying to users, and engaging with new reviews.1

App ratings paired with established ASO techniques are integral to increasing organic visibility both within app stores and outside.2

How to Ask for App Ratings and Reviews

We’ve all been asked to review a product or service. Sometimes those requests can feel invasive — like that phone call with a customer service representative who asked you several times to take a survey at the end of the call.

Did you take the survey? We’re guessing not.

How you ask matters.

Don’t overstep your bounds and ask users to review your app multiple times. While prompts are great, it’s also important that you don’t pester users by repeatedly surfacing the prompt throughout their user journey.

Timing, ease of use, and platform are all important aspects of a good user experience, which we cover more below.

Ever had a waiter ask how your dinner is while you’re still in the middle of your first bite? There’s nothing worse than an app that asks for a review right when you open it.

This is an unfortunate mistake that far too many apps make, leading to poor UX and less likelihood for a review because the app is interrupting the normal user flow. In fact, doing so is 50% more likely to cause the app to be closed than if you ask at a different time.3

Don’t bother a user when they’re in the middle of something important.

Instead, initiate the prompt after a positive user experience, like a successful transaction or a liked post. Prompting a review when users are feeling good about the app makes it a win-win situation.

2. Make It Easy to Review

Long gone are the days when users had to review apps solely through the app store. It’s no longer necessary to hunt down an app, create an account in the app store, and write a review.

Instead, you can request a review inside the app itself. Users can then tap the number of stars inside a pop-up, making it far easier. Plus, they can be prompted to leave a detailed review, so those who want to take app ratings to the next step can do so.

Users are more likely to write a review once they’ve already put in the effort to choose a rating.

In-app is, without a doubt, the most efficient way to collect ratings and reviews, but that doesn’t negate other options. Try including requests through the following channels:

Contests. While this requires you to manually oversee the entire process, contests are a great way to motivate people to rate your app. Reviewers can leave their Apple ID or Google Play usernames as replies within your thread where you can select a winner at random.

Social media. You’ve likely considered using social media influencers to drive awareness for your app, especially during the initial launch. Likewise, influencers are a great way to help you run contests or use your social media platforms to encourage people to try and rate your app.

Transactional emails. Those post-transaction confirmation emails are another great place to prompt users to rate your app (and incentivize referrals). Soliciting feedback can be as simple as asking for a review by directing users to your app in the app store. Alternatively, you may want to send these email requests after a customer has received an order. 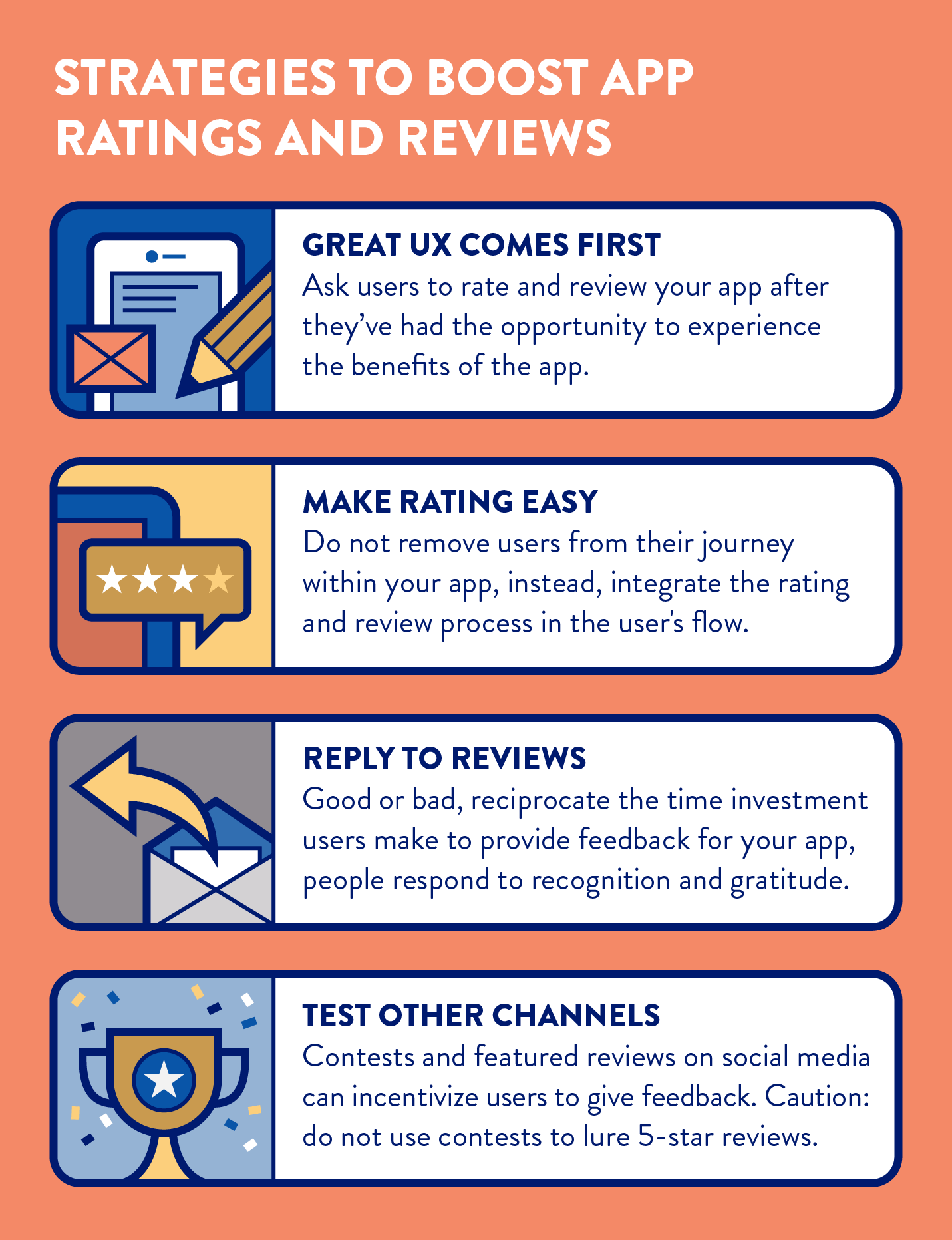 Responding to App Ratings: The Good and The Bad

As mentioned, responding to app ratings and engaging with users is essential. Not only is it good for ASO, but users want to feel heard. Responses also give you the chance to learn what you’re doing correctly and what your users’ real pain points are.

Addressing feedback to app ratings is as easy as responding directly on your App Store product page or from your Google Play Console. When responding to reviews, here are some things to keep in mind:

We’re all familiar with the user that gives ratings and reviews when they’re upset, and sometimes these can get out of hand.

If you see a review that contains offensive material, spam, or other content that violates an app store’s conditions, you can always report the review instead of replying to it. In this case, the user who wrote the offensive review will not be notified that you reported a concern.

With over eight million apps available across the Google Play and Apple App Store, the possibilities for mobile users are endless. However, they’re also incredibly overwhelming.

App ratings and reviews are crucial when it comes to simplifying the selection process. More importantly, they help you stand out in a sea of competitors and make sure your app doesn’t end up in the boneyard.

To learn more about app store optimization and your app’s performance, try using CleverTap’s app analytics dashboard that tracks key metrics and informs you which ASO tactics are working and which aren’t.