And loose guidelines about your app’s advertising and user communication policies push users to uninstall, sinking your customer relationships.

In a recent survey of over 2,000 mobile app users, we asked their main reason for uninstalling mobile apps and found the top reasons are:

From the results of this survey, we were able to get to the root causes of a rise in app uninstalls.

Keeping users engaged, respecting sensitivity to advertisements, and performing adequate software testing are some of the solutions to the top reasons users uninstall apps. You can continue reading for more solutions or jump to the infographic with visualizations of the survey results.

Why Are People Uninstalling Apps?

No app is safe. It’s a M-app Exodus, a Mass App-odus. Ok, let’s not take this too far, but people uninstall apps every day for a number of reasons.

Perhaps their reasons for uninstalling are legitimate (despite your best intentions).

For example, a security breach compromised trust and therefore resulted in a lost user. Other times, their reasons for uninstalling apps may be out of your mobile marketing team’s hands. For example, limited storage space.

The time horizon for user engagement may differ from app to app. Travel apps, for example, are not likely to have daily active users since travel is typically a less frequent occurrence. This is a likely explanation for why travel apps experience one of the highest uninstall rates across industries: 35% of users churn within 2 weeks.

The obvious goal of most apps is to remain relevant enough to warrant the consumed storage space, but really, maintaining user engagement should be a top priority as our survey results indicate. 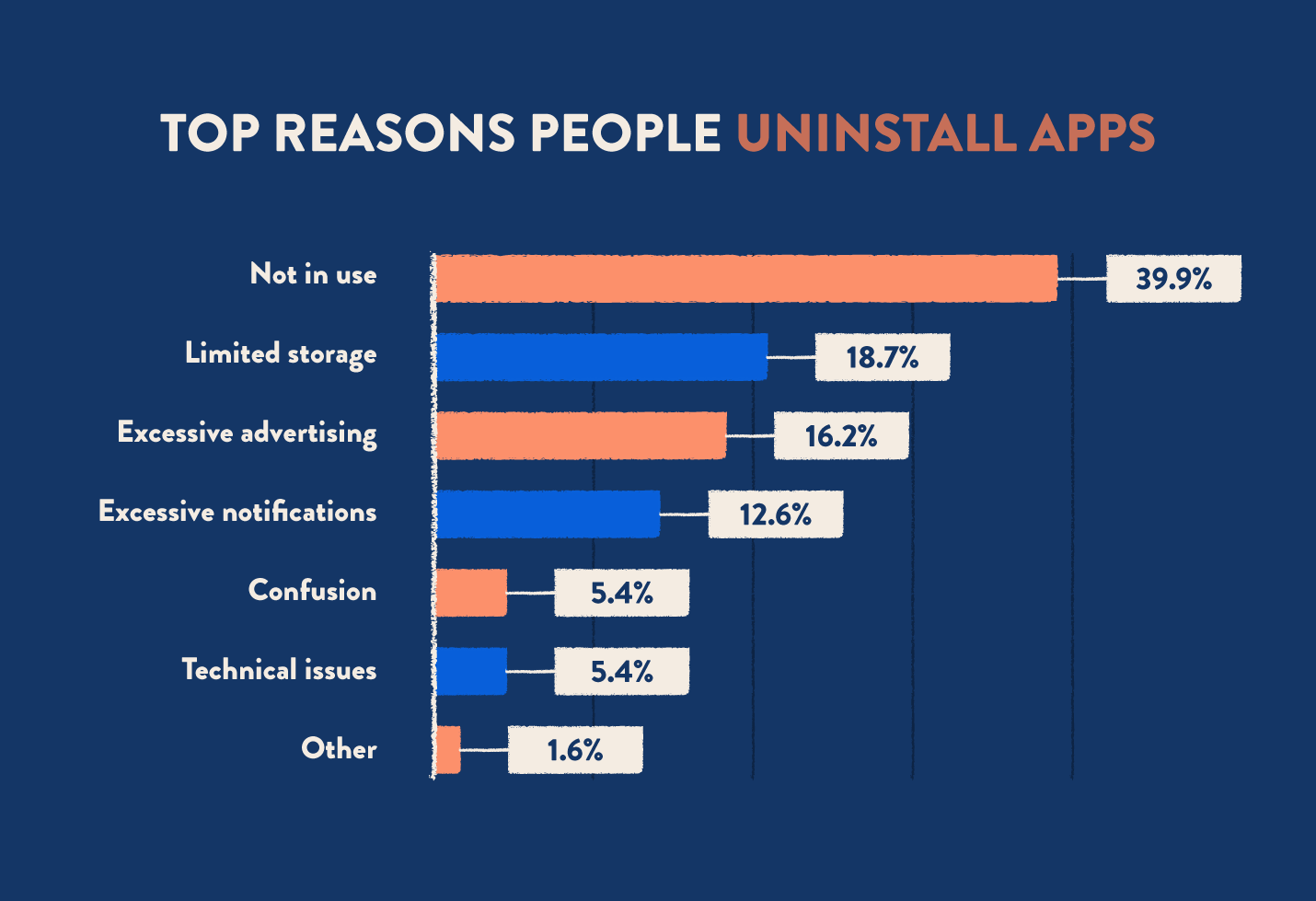 39% of People Uninstall Because They No Longer Use The App

Overwhelmingly, users are uninstalling apps because they simply do not use the product. This could mean your engagement and retention efforts are ineffective or signal bigger problems with the value proposition.

Stickiness, like virality in marketing, is something that can be encouraged but is not predictable with any degree of accuracy. If your DAU (Daily Active Users) to MAU (Monthly Active Users) ratio is on the decline, meaning daily active users are returning with less frequency, this could be a warning sign of an upcoming rise in uninstalls.

TIP: Track user engagement and retention rate metrics to make necessary increases or decreases in re-engagement campaigns, such as push notifications and in-app messaging. Use caution, however — the next section covers why aggressive communication tactics can actually drive customers away.

By now, you might think most people have accepted the unspoken agreement that freemium products are available in exchange for receiving advertisements. Although people have come to expect mobile apps to be free, they seem to have become more sensitive to advertisements.

But let’s face it, this sensitivity could be a result of invasive and aggressive advertising tactics. 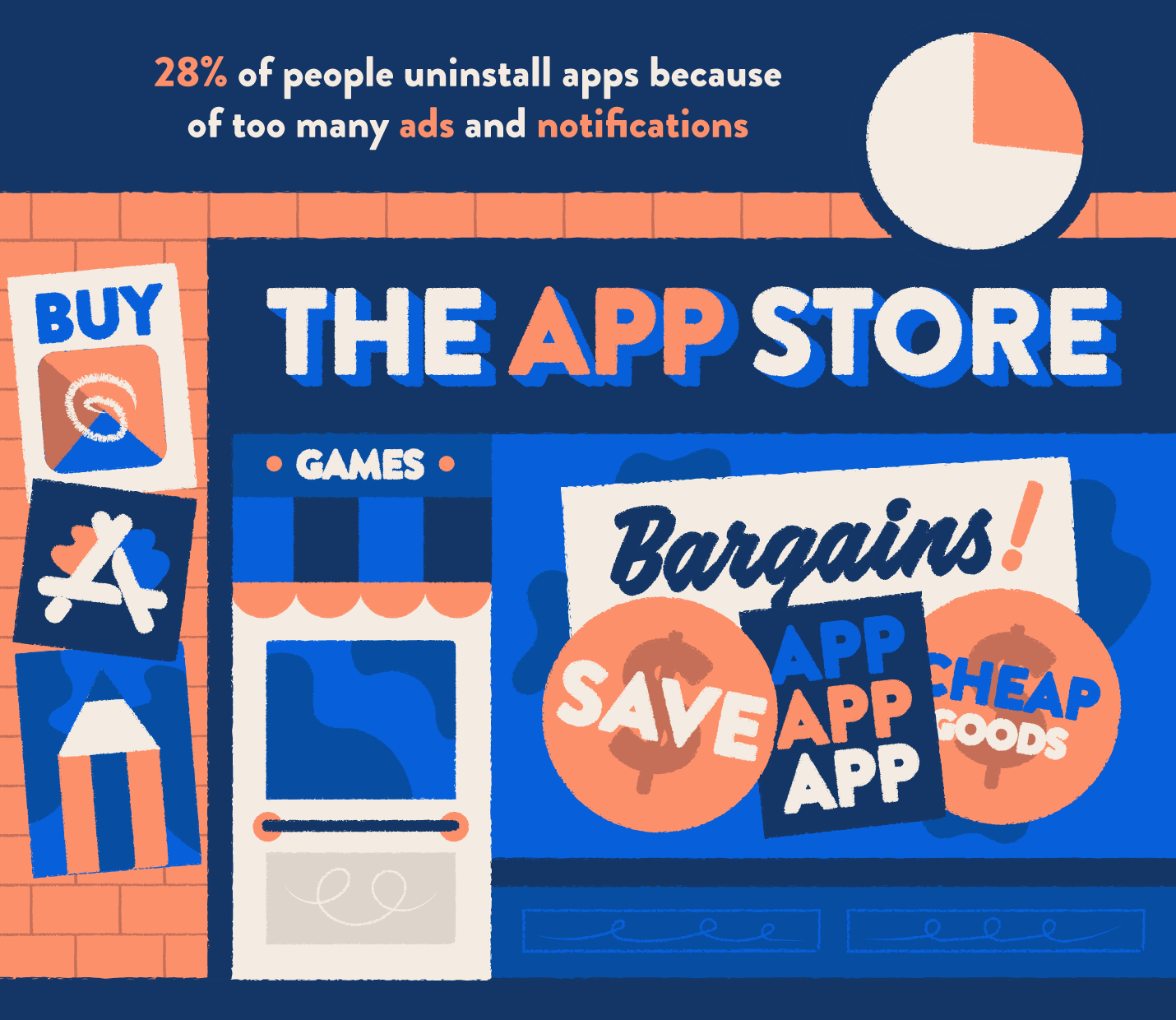 TIP: First, consider how advertisements will interrupt the user experience and work around those critical bottlenecks. Track conversion rates and reactions triggered by advertisements and push notifications.

Second, use a platform that allows for intent based segmentation. It identifies three user segments: most likely, moderately likely, and least likely to convert. With a deeper understanding of user intent, you can effectively send more relevant messages — and avoid spamming users with unnecessary notifications.

20% of People Uninstall Apps Due to Limited Storage Space

It might not come as a surprise to learn that storage is a constraint for many smartphone users, since the average smartphone has 35 apps installed.2 You may even have first-hand experience with those iOS “Storage Almost Full” and Android “Storage Space Running Out” notifications.

Women were more likely to uninstall apps due to limited storage space (although not sure how surprising this statistic is knowing how many photos are on my wife’s phone). In fact, 59% of respondents who chose “Limited storage space” as the main reason for uninstalling apps were women. 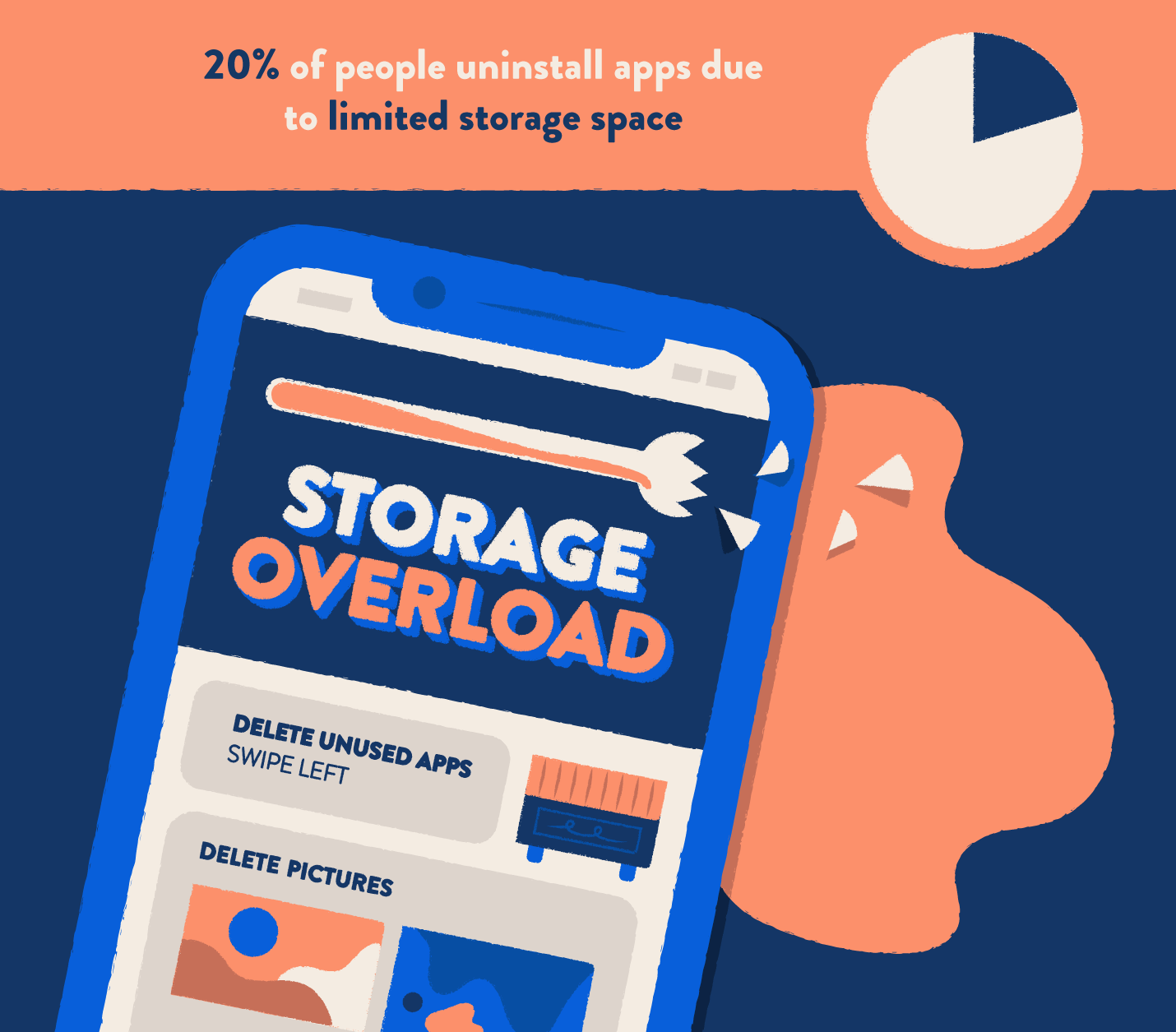 11% of Users Removed Apps for Technical Issues or Confusion

Although technical issues, such as bugs and app crash reports, are a near inevitability for software products, they should not be common enough to warrant uninstalls in droves. Over 5% of respondents reported technical issues as the main reason they uninstall apps.

TIP: One way to mitigate the risk of technical issues is to insist on rigorous software testing and a lengthy beta test before launching at full scale. Since testing won’t eliminate bugs entirely, especially as new features are released, focused attention on your mobile app analytics and crash reports can provide insight into what’s causing technical issues.

Everyone has likely encountered a piece of software that was confusing to use, whether it was the first attempt at using Snapchat’s “intuitive” UI or navigating a government website.

You might assume an older generation (65+) would have the most confusion when using mobile apps, but another age cohort proved more likely to report removing apps because they were confusing to use: 25-34 year-olds. 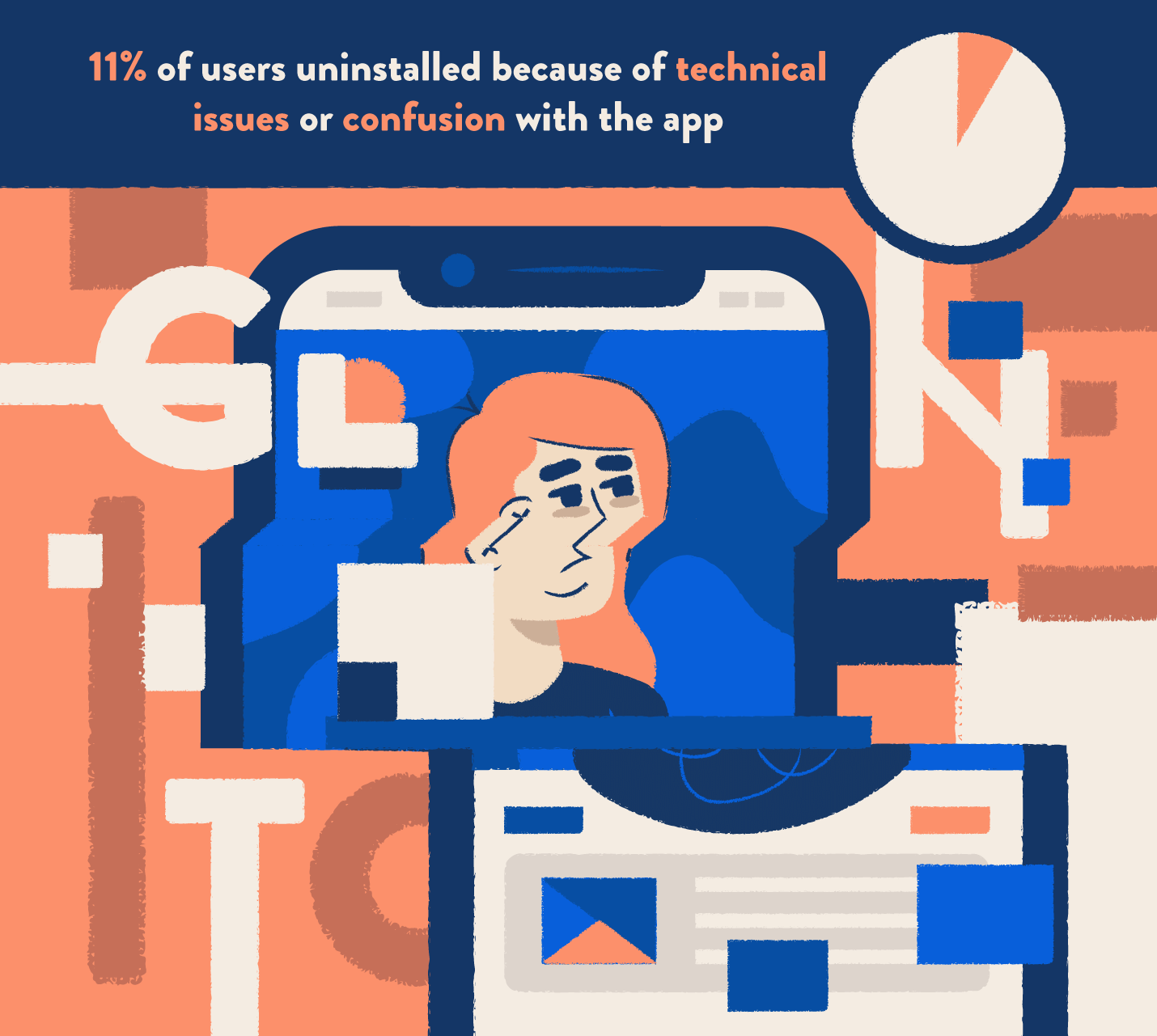 As you are now well aware, the reasons for app uninstalls are plentiful. You might even have received feedback from users that they uninstalled your app for a reason that was not included above.

If you want to keep your users engaged and your app installed on their phone, we have included tips for your team to consider moving forward, to recap:

Implementing a successful user engagement strategy is one of the most important tools for preventing app uninstalls at your disposal. Learn more about how to delight customers and keep users coming back with our guide to user engagement.