To say that mobile gaming is a huge sector would be an understatement. In 2021, mobile gaming apps brought in $98.22 billion in revenue, with that number expected to reach $103.5 billion by the end of 2022. But how can a mobile gaming app get a bigger piece of the pie? The answer, of course, is by focusing on retention.

Google Play partnered with The Behavioural Architects to look into how best to optimize gameplay, deepen player loyalty, and drive long-term player retention. The result is an industry report on gaming apps entitled Games That Retain. It contains insight from 12 leading game developers and five industry experts (myself included) who shared best practices and hard-earned lessons in building retention campaigns.

Below are the highlights.

The Nine Characteristics of Games That Retain

When you talk about retention in gaming, you’re talking about players who can’t get enough of your app. They’ll keep coming back to play, whether lured by your marketing campaigns, driven by a desire to reap daily bonuses, or simply “hooked” by the pure enjoyment of your game.

And if you start comparing the games that retain players long term, you’ll notice these nine common characteristics: 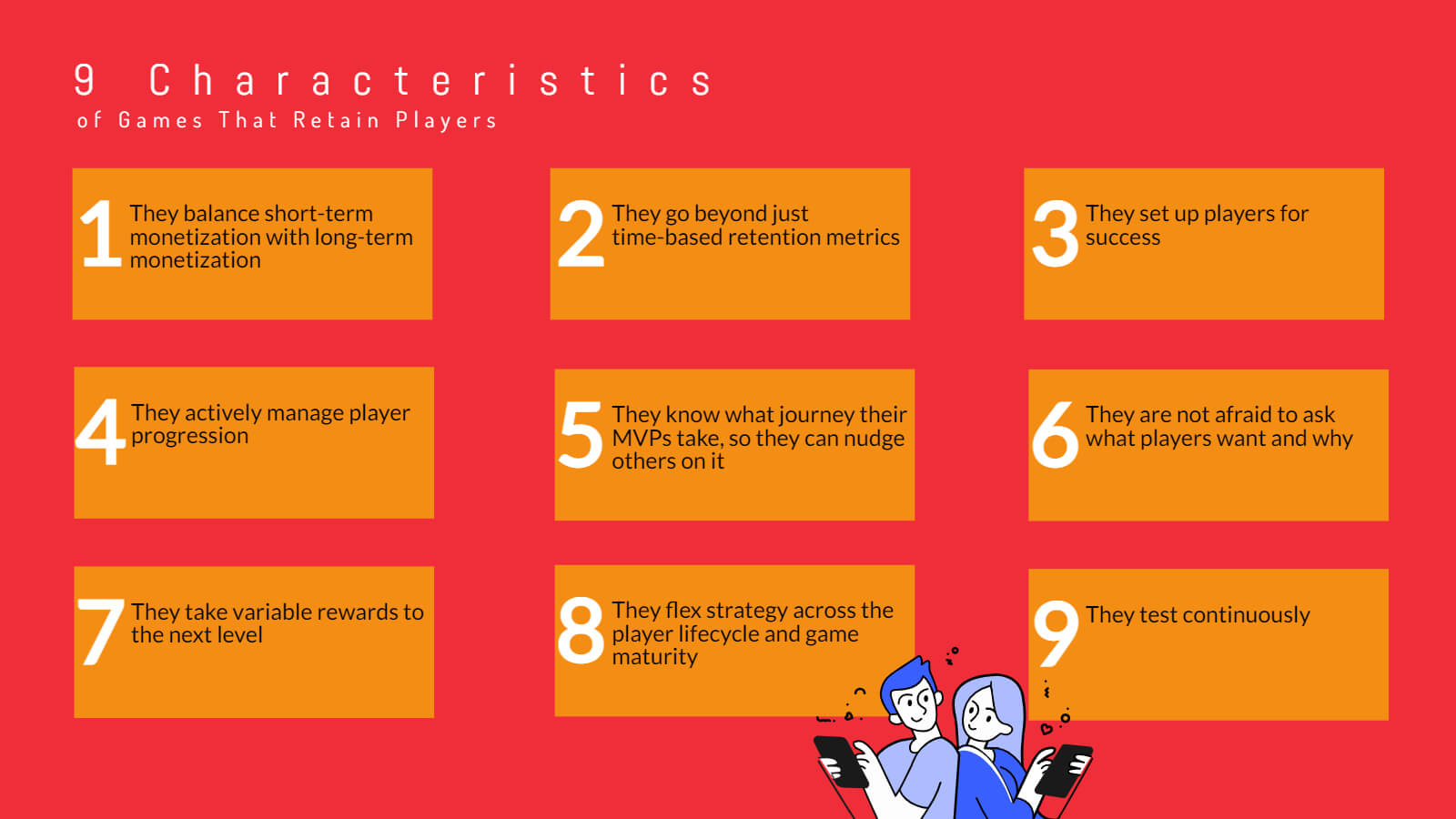 By ensuring that monetization actions never negatively affect LTV, these games are looking past making a quick buck and instead aiming at long-term growth and revenue. Other actions such as ensuring players have enough starting “currency” within a game to build their skills also help sweeten the gaming experience from the outset without forcing a player to spend to play.

Instead of simply looking at metrics such as gaming session time, or how long before first in-app purchase, these games look at metrics that are more directly actionable, such as: behavioral data (e.g., levels completed, matches won, etc.) and retention thresholds (how often these behaviors need to be done in order to retain these players).

3. They set up players for success

First-time user experiences are critical for long-term retention. These games get new players excited about the game with rewards, incentivizing them to learn and master the core skills needed to master the game, and making sure it’s neither too difficult nor too easy for new players.

The games that have high retention show players what they can aspire for in the long term, but also parse out daily or weekly goals so players feel like they’re improving and working toward the aspiration. These games also typically support gameplay with an engaging narrative that makes players want to discover more by playing more.

5. They know what journey their MVPs take, so they can nudge others onto that journey

Most Valuable Players are those that have invested time and money into playing the game. Game developers watch what an MVP does (e.g., what actions they do, what features they use most, how long their gaming sessions last) and then seek to persuade other players down the same route. The goal: turn more players into MVPs.

6. They are not afraid to ask what their players want and why

These games ask for feedback, and use it to build new features or perfect what’s already there. Meanwhile, the developers are building a community around their game by including players’ opinions and feedback.

7. They take variable rewards to the next level

8. They flex strategy across player lifecycle and game maturity

As a player’s needs change over time, each game’s retention strategy should change as well. For example, at the start, make it easy to onboard players by rewarding them easily and showing them how to progress through the game. Later on, pivot to give them more complex gameplay, setting goals, and making things more competitive.

Like any successful app, the best gaming apps are never content to rest on their laurels. They design and execute tests to see if there are ways to improve. What sets the successful games apart from the forgotten ones are: ensuring that every test has the player’s interests at heart, also monitoring the effect on both retention and monetization.

Improving Your Game’s Retention is Doable

These nine characteristics are fully attainable for any mobile gaming app willing to set aside short-term monetization for long-term rewards. But before diving headlong into a new strategy, make sure that you’ve got the complete picture. The Google Play report has numerous examples of how actual gaming apps implemented their retention strategies and what the results were. Download it and use it as a resource.