5 Disruptive Apps and How They Changed Their Industries

Mobile apps are not the first technology to disrupt an entire industry, and they won’t be the last.

Mobile apps have brought disruption to the 21st century — unlocking the potential for workers to be displaced and industries to change dramatically. You may have seen taxi drivers protesting Uber or signs scattered around your neighborhood opposing short term rentals like Airbnb. Signs of disruption.

In this article, we analyze 5 of the most disruptive apps to emerge over the last decade, how they disrupted their particular industry, and we discuss new, emerging companies ripe for disruption. Continue reading or you can jump to our infographic below.

What Makes an App Disruptive?

Do jobs need to be lost for an app to be disruptive? No.

In fact, truly disruptive apps can unlock value, enabling people to perform the job better than before.

For example, companies like RigUp, Fiverr, Upwork, and others allow you to find paying jobs from anywhere in the world. This has disrupted labor markets in a good way, unlocking a global talent pool.

The biggest factor that contributes to the disruptive-ness of an app? Convenience.

One of the defining traits of innovation is a new method for performing an action. Disruptive apps are an innovative method for accomplishing the task at hand (literally).

Another characteristic of a disruptive app is the aha moment. The moment when you realize how much better the new solution is compared to the way things were previously done.

For example, when you previously had to jump through hoops to pay your friends, communicate between banks, and wait on the slow pace of financial transactions, Venmo’s value proposition of immediate peer-to-peer payments was an easy aha moment.

The following apps have disrupted the global workforce, economy, and everyday lives of humans around the globe.

The way Americans eat has been disrupted a few times in history. After WWII, Americans settled into the postwar suburban era, babies were booming, and processed foods were becoming the norm.

Today, we use our mobile phones to have not just processed, but also prepared food delivered directly to us. Grubhub, one such mobile app, started from the merger of two separate entities. Seamless, founded in 1999, was built for companies to have restaurants and caterers deliver food. Grubhub was originally created to bring menus online. Upon merging, they became the premier partner for restaurants to quickly scale their take out business. 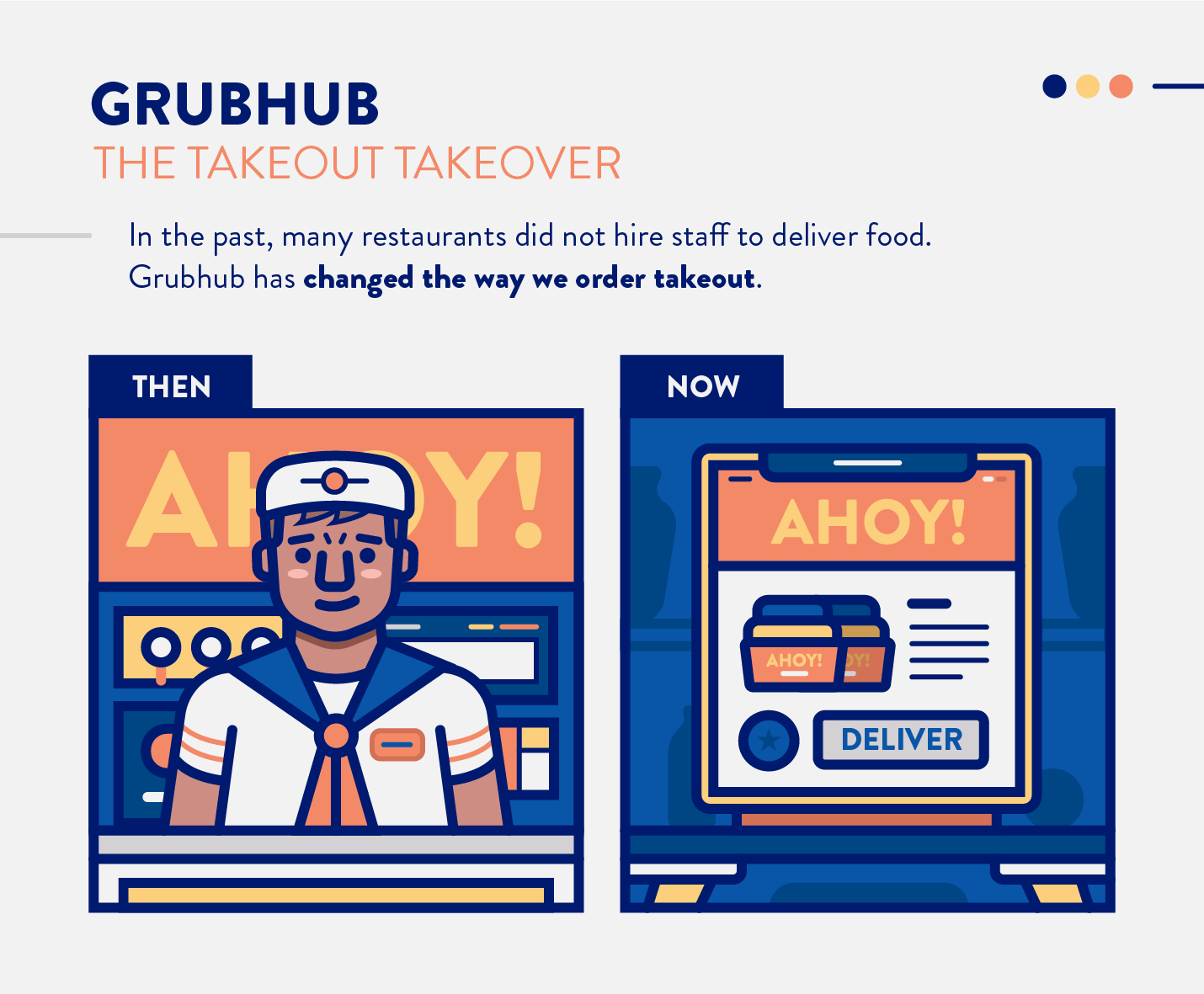 Grubhub raised more than $284 million before going public in 2014 at $26 per share, setting the companies valuation at $2.7 billion. Currently, Grubhub has a market capitalization of more than $5 billion.

Here are some statistics about Grubhub’s current usage1:

Grubhub is another case where jobs were not taken away because of their disruption. Instead, jobs were created by unlocking the potential for restaurants to generate additional revenue and delivery drivers to contribute to the gig economy.

Grubhub is also the ultimate case of disruption via convenience. It doesn’t get much more convenient than getting prepared food delivered directly to your door.

The origin story of Uber is a classic tale of the Silicon Valley cycle to innovate, pivot, grow, and repeat. Founded in 2009 as a way to unlock luxury black car services for more users, Uber quickly realized the broader taxi industry was ripe for disruption.

Uber raised more than $24 billion before going public in 2019, where the company was valued at more than $82 billion. Currently, Uber’s valuation is closer to $51 billion.

Today, Uber operates in more than 600 cities across 65 countries generating more than $50 billion in gross bookings in 2018. Uber has also expanded into other verticals, including food delivery. 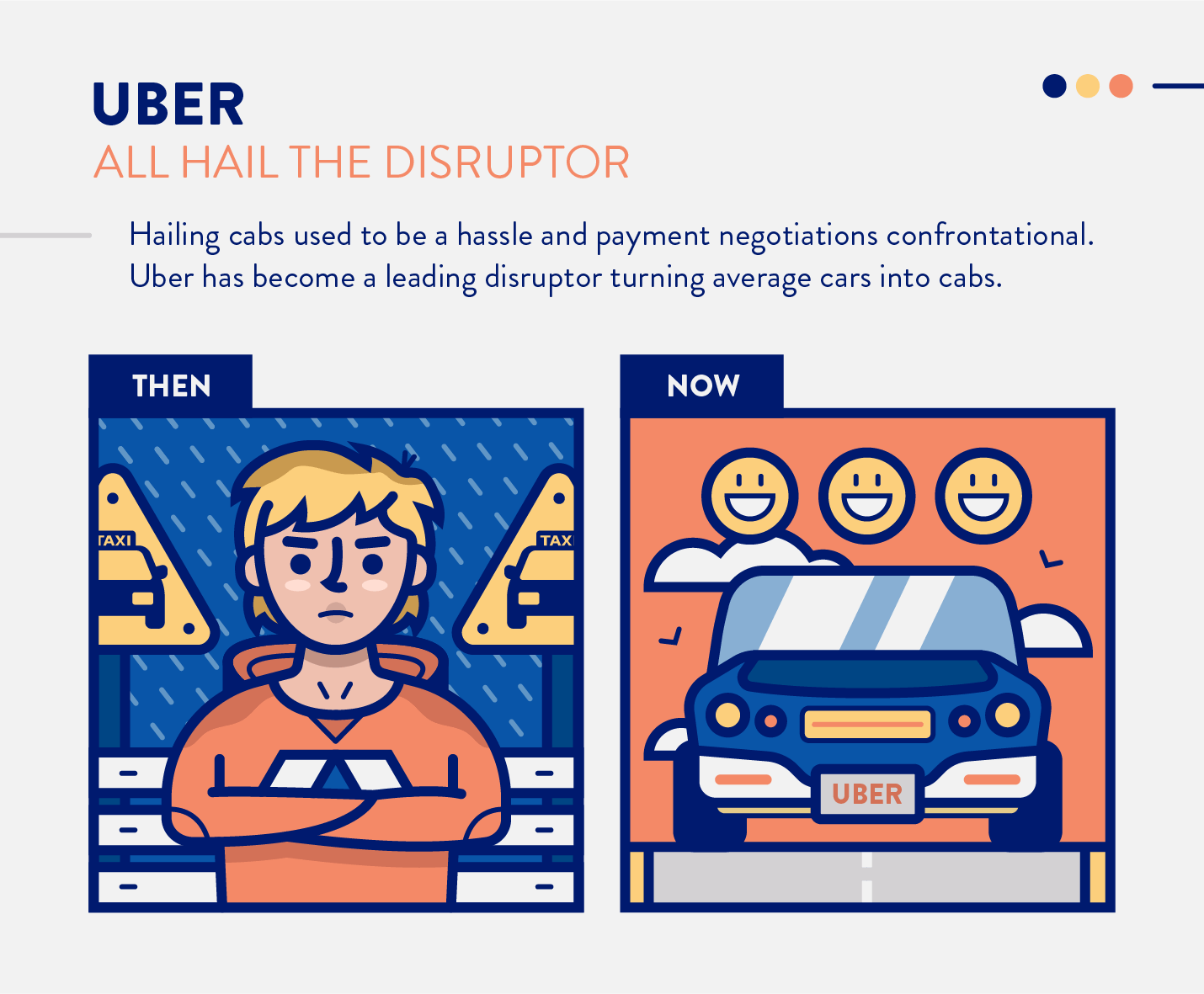 Here are some takeaway stats about Uber’s disruption2:

Uber continues to target new industries and verticals to disrupt. Upon launching UberEats, they directly targeted Grubhub for disruption, and more recently, Uber launched a helicopter service in New York City to disrupt… well, the egos of billionaires who previously had the helipad reserved.

This wouldn’t be an article about disruption if we didn’t discuss Fintech.

Betterment was started in 2008 to automate the portfolio management process and offer the services of a financial advisor at a reasonable fee structure. Since then, they have accumulated more than $18 billion USD in assets under management.

Betterment has raised more than $275 million in venture capital funding.

Some statistics about Betterment’s path towards disruption:

As Betterment continues to disrupt the registered financial advisor industry, the consumer is rewarded with more advantageous fees and therefore a boost in the long-term performance of their investments.

We already touched on the power of platforms to connect businesses with a candidate who harnesses the skills required to get the job done. Freelancer, one of the earliest disruptors in this space, has become a powerhouse for crowdsourcing skilled labor.3

Founded in Australia in 2009, Freelancer raised $37.5 million AUD (~$25 million USD in October 2019). This level of financing is impressive given the company now trades on the Australian stock market at a market capitalization of more than $340 million AUD. 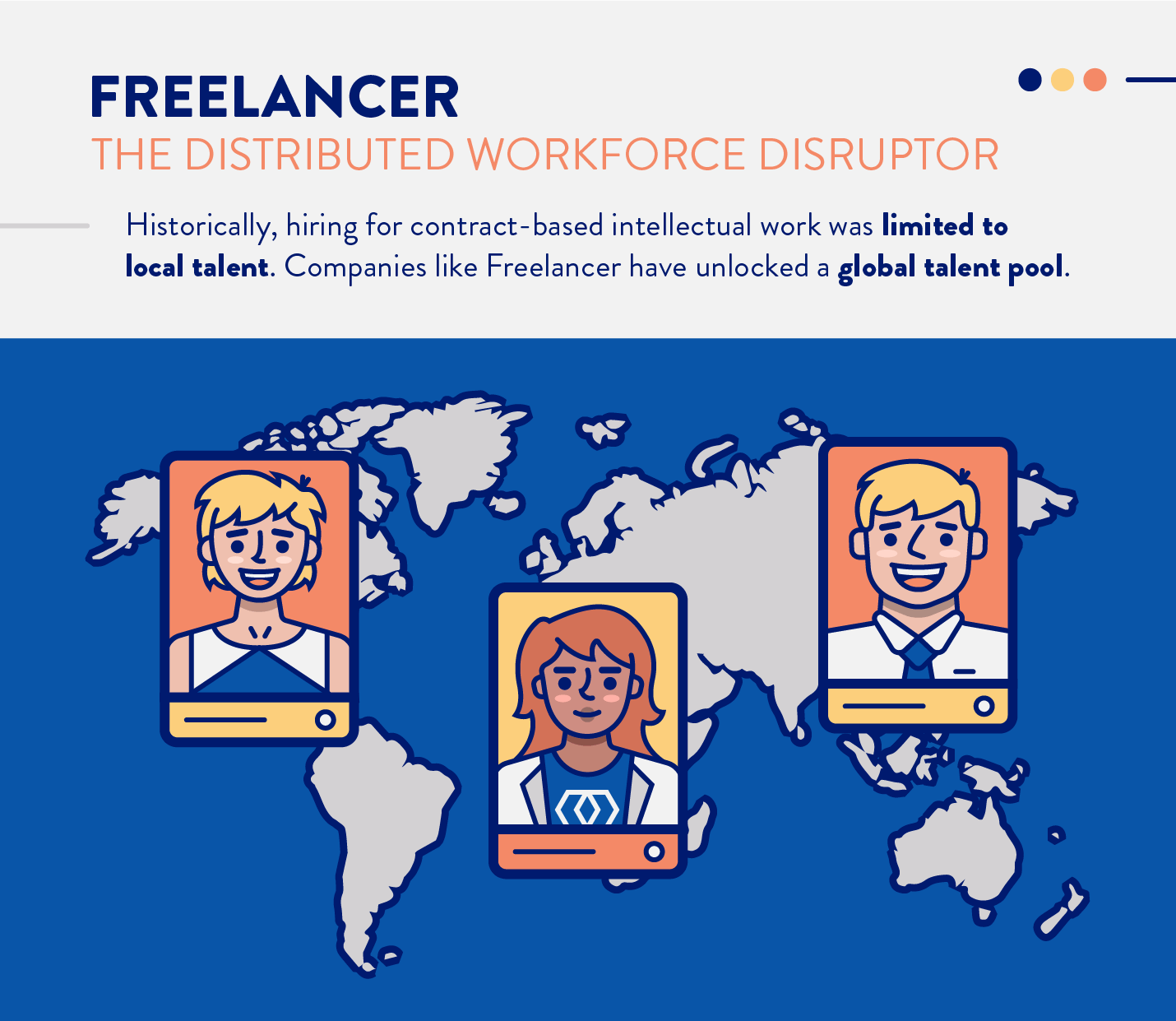 Here are some stats about the progress Freelancer has made:

Helicopter to the airport ✓

A place to stay…

Airbnb was founded in 2008 as a way for its co-founders to pay rent when a conference caused a shortage of hotel vacancy. From there, the company weathered a series of setbacks, trading card binders filled with credit cards (and debt), and an attempt at selling breakfast cereal before becoming the behemoth disruptor we know today.

Airbnb has raised $4.4 billion and is rumored to be planning a direct listing to take the company public in 2020.

Here are some statistics about the state of Airbnb’s disruption:

The Model for Disruption

Analyzing how these companies were built, you can be sure there are no overnight successes in disruption.

One thing to note is that some companies have been able to disrupt on a budget and at a record pace. Freelancer, for example, only raised about $25 million or 960x less than Uber.

Accepting payments online used to be reserved for big companies who could work directly with banks. Then PayPal came out with a novel approach to online payments.

Disruption begets disruption. If you want your app to be the next disruptor, you must think out of the box with your growth marketing strategies and elevate your user retention efforts. If you can create a more convenient user experience, your app will disrupt the incumbents.

As they say, “The best way to predict the future is to create it.” If you plan to disrupt your industry with a mobile app (or an app on a device that doesn’t even exist yet), one thing will never be disrupted: the customer.

If you want to better understand your users and how best to connect with them, consider the sophisticated suite of tools from CleverTap. From RFM analysis to psychographic segmentation, you can learn how to create a uniquely personalized and optimized user experience for each and every segment.