Hyper-casual games are likely to take the mobile gaming industry by storm. Some would argue that they already have. For anyone in doubt, all you need to do is look at the numbers. According to Sensor Tower, in 2020, hyper-casual games on mobile were responsible for a third (31%) of global downloads or 6.3 billion downloads*.

This popular, exciting genre started the race with great momentum, thanks in large part to the 2014 viral sensation Flappy Bird (more on this later). However, for 2021, experts predict that there will be a noticeable decline in hyper-casual games due to Apple’s iOS 14.5 privacy rules. While these changes were anticipated, it doesn’t make the reality any less painful for businesses.

So will hyper-casual games survive a post-IDFA (Identifier for Advertisers) world? How exactly did we get here, and what games continue to leave impressions for aspiring gamers and developers? In this post, we examine the past, present, and future of hyper-casual games, and how marketers can benefit from this knowledge.

Don’t forget about our infographic below for an even more comprehensive look at this popular gaming genre.

What Are Hyper-Casual Games? 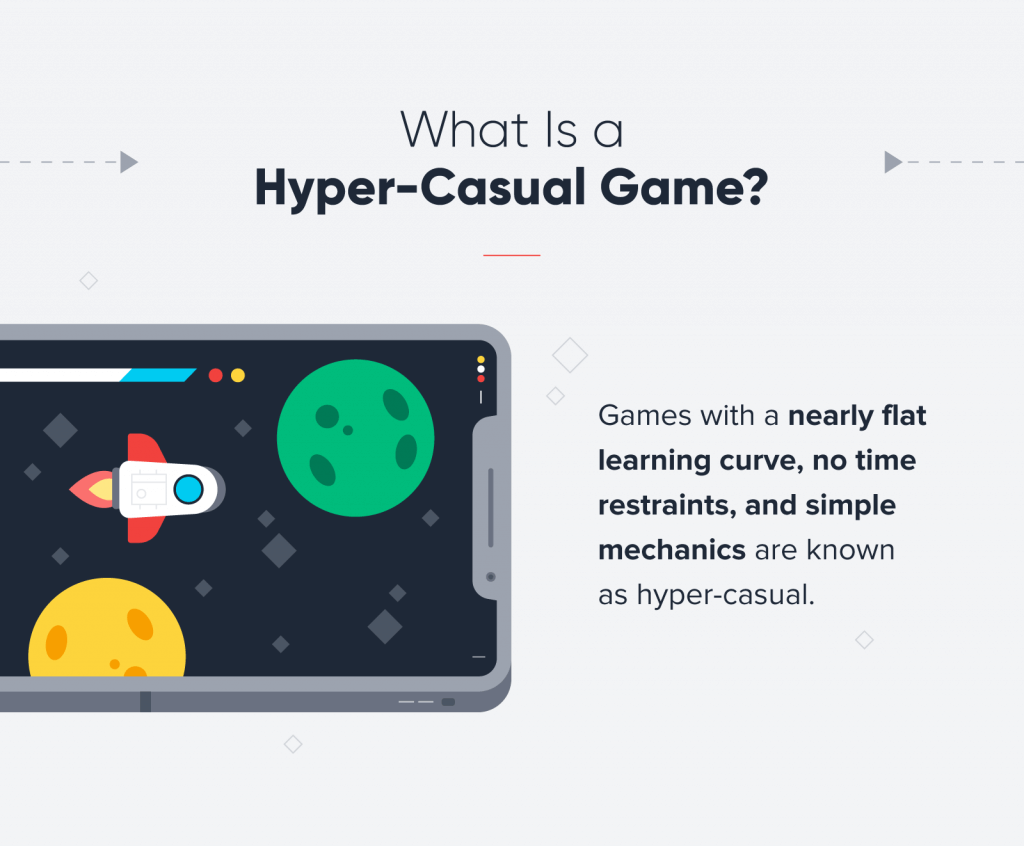 Hyper-casual games are lightweight, simple in mechanics, usually free to play, and require minimal design. They are easy to play and highly addictive.

Another thing to remember is that hyper-casual games are very data-driven. This requires developers to be hyper aware of user information. This data is a goldmine for advertisers, particularly when more than 73% of mobile gamers report openness to receiving in-game ads*.

And the industry is heavily reliant on ad monetization. Once the operating system update is official, a user can opt out of targeted ads, which ironically isn’t necessarily the best option for a user. It’s likely that advertisers will increase the volume of ads served to make up for loss in revenue. Essentially, without quality, users will receive quantity.

This update also means less tangible data for advertisers and marketers — it also warrants the return of guesswork on which channels to focus on. Marketers will then rely more on the qualitative context behind a user’s journey, rather than quantitative context.

Even with the monetization challenges ahead, it’s important to look at some of the top strategies that publishers utilize to monetize on their large hyper-casual user bases. Here are four worth keeping in mind for marketers looking at pivoting existing strategies. 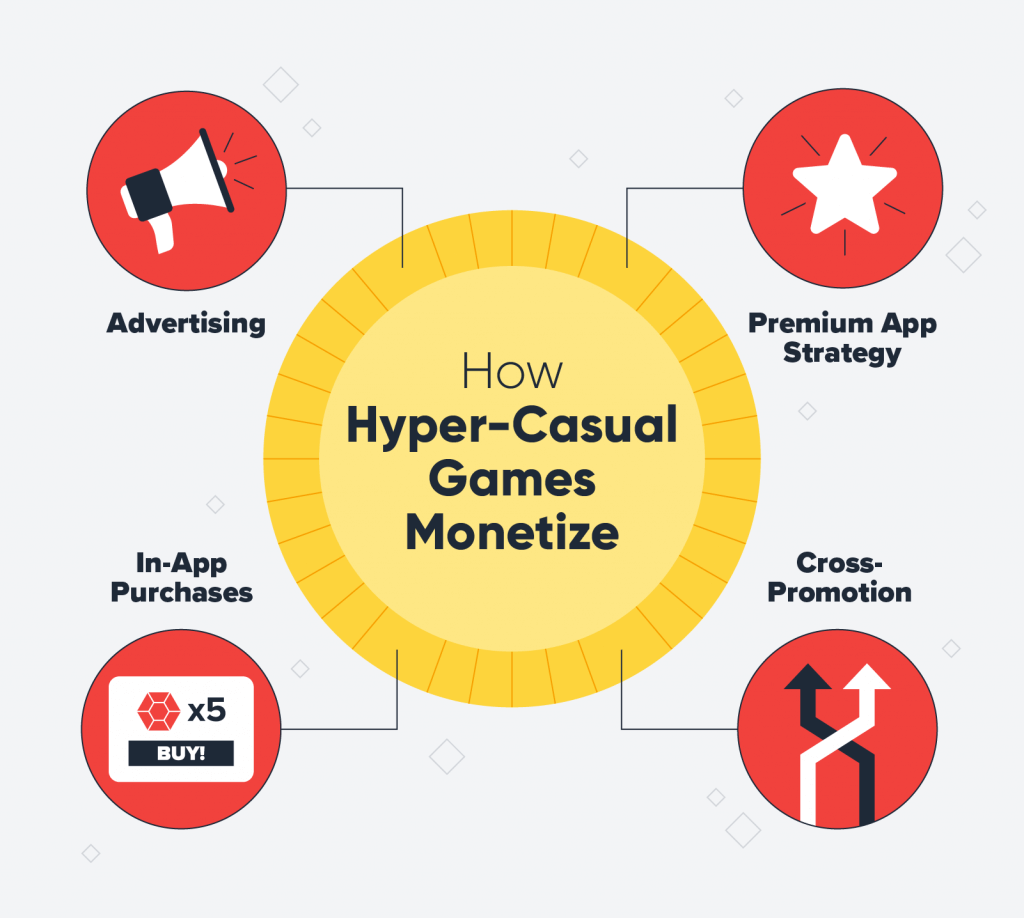 As publishers move away from IDFA, in-app purchases become an even more attractive option for monetization. According to Statista, mobile advertising spending worldwide is expected to surpass $240 billion by 2022*.

In-app purchases are great for gamers. They grant access to additional levels that are otherwise inaccessible to users of the free app, and are also used to sell ability boosters, extended play time, and even in-app currency.

One publisher that has mastered the in-app purchase game is Homa Games. The French startup has primarily focused on the hyper-casual industry and as of February 2021, Homa Games raised $15 million in funding and announced plans to build a content production and publishing engine that focused on three key areas, including in-app purchases. The product, Homa Data, will manage and optimize monetization for advertising and in-app purchases*.

Let’s look at Sky Roller, a popular title from Homa Games. It’s a free-to-play game that allows a user to enjoy an endless roller skating run. For iPhone gamers, one of the most popular in-app purchases is the VIP option. For $5.99 a week, there are no ads, 500+ gems every day, and exclusive skins for a user’s character.

Suppose the 200K downloads in May 2021* each had a weekly VIP subscription. That’s almost $5 million in revenue from in-app purchases alone. This is a great number to strive for, but in reality, it can be tricky to encourage hyper-casual gamers to pay. Not everyone will pay $5.99 a week — offering options, such as a single in-app purchase for $0.99, can make all the difference.

While these stats showcase how powerful in-game advertising is predicted to be, here’s one key thing to keep in mind. When advertising within a mobile app, don’t compromise the user experience. Do not invade the experience with too many popup ads or display ads that distract from the user interface and risk uninstallation. This can have significant repercussions if you do.

More than a third of U.S. hyper-casual players have abandoned a game in this genre because of ads that showed up too frequently*. One way to prevent this abandonment: create longer, less frequent ad breaks over shorter, more frequent ones. Consider using interstitial ads between levels or pauses in gameplay to advertise, which can keep the experiences separate.

It seems that something is in the mobile gaming water in France. In Q3 2020, French mobile game firm Voodoo became the top hyper-casual game publisher with more than 529M installs*.

This growth shows no signs of slowing down: according to Statista, in May 2021, Voodoo was the most popular gaming app publisher for iPhone worldwide with more than 23.1 million gaming app downloads*.

Voodoo not only tops the app store rankings, but also does a great job cross-promoting games within its portfolio. It’s fair to question this strategy approach. Why would publishers want to encourage users to transfer their playtime to another game, especially when 77% of users stop using an app after three days?

Think of it in this way: if you have a game that users love, the chances that they enjoy another game that is designed by the same publisher is probably high. It’s similar to when Netflix and other streaming services use “If you like this show, you might like” to keep  users watching.

While this means that only a small percentage of apps have a price tag, the premium app strategy is still a good one to consider. As mentioned above, Sky Roller has a VIP subscription option for $5.99 a week which means no ads and extra incentives. The truth is that publishers can’t and shouldn’t just offer one monetization option. Successful games — like Minecraft, which has a $6.99 premium price tag — offer a combination of the other strategies mentioned above.

Before deciding which way to go, consider whether a user base will pay for a product without a trial. The best of both worlds exists for free apps with in-app purchases, advertising and cross-promotion, because users can use the product, have their aha moment, and then decide whether to invest further in the paid options.

Hyper-Casual Mechanics: How They Work 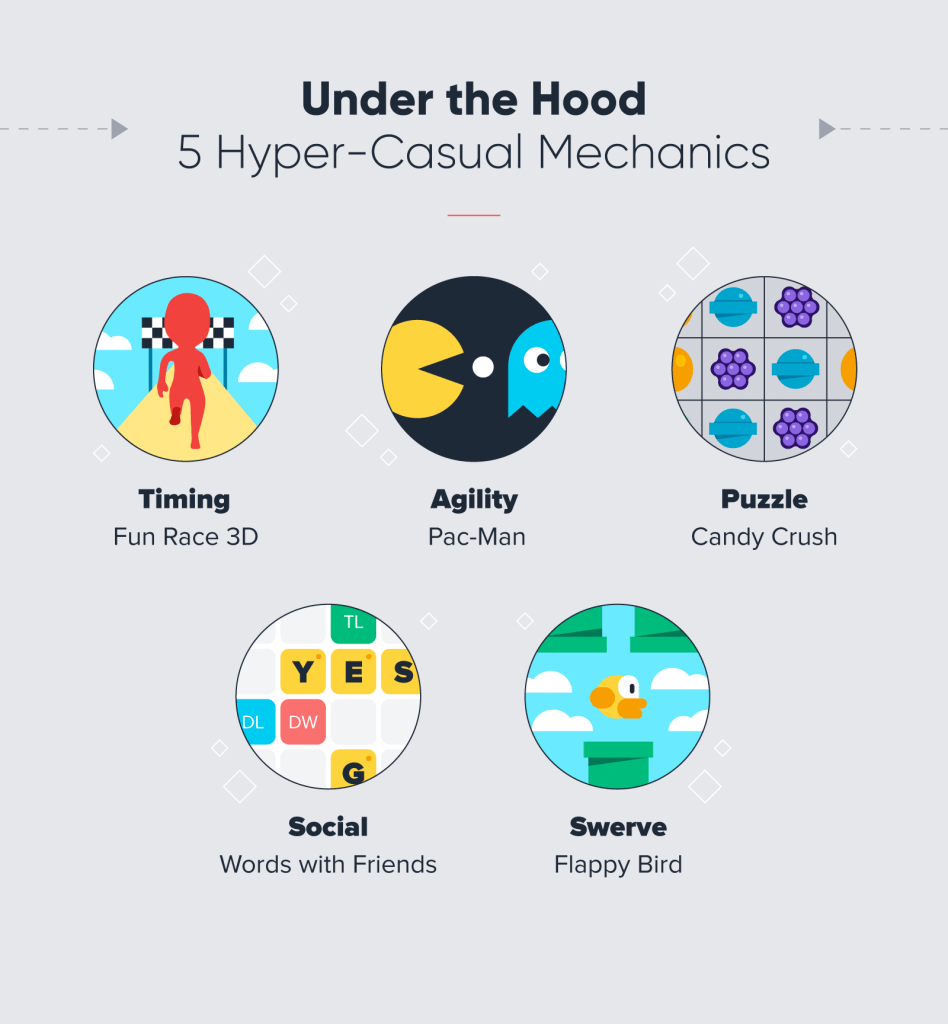 It’s common knowledge that if you build a great app, users will come in droves, right? For hyper-casual games, remember the three S’s: simple, short, and satisfying. An overcomplicated game will lead to game abandonment, so let’s look at some of the most popular mechanics in hyper-casual games as well as which games use them.

This is all about testing a user’s precision. The game relies on the exact timing to achieve the ultimate goal. A user is rewarded for perfect timing. This is a simplistic mechanic and developers will have to find that sweet spot on difficulty. In other words, if it’s too easy, users will move on, and if it’s too difficult, gamers will become frustrated and abandon the game.

First off, don’t confuse agility with timing. This game is all about hand-eye coordination and the ability to make quick decisions. A user should have the opportunity to dodge obstacles and collect coveted items. The thrill of collecting these items should fuel their agility with levels getting harder based on items collected and speed.

Similar to traditional puzzle games, the goal is to think as logically as possible. As pieces fall into place, the player must modify the shapes to fit within the bigger picture. When mistakes stack up, the gameplay becomes increasingly more difficult as the space and time to modify the puzzle pieces shrink.

Do you love the satisfaction of progression? Then you probably play a lot of games with merge mechanics. The objective is simple: combine similar things to receive a rewarding object or result. The merging must remain exciting but also simple.

At times, the user isn’t even playing, but happy to indulge their senses as the pieces continue to work themselves into winning positions.

The average gamer spends 8 hours and 27 minutes a week playing video games*. Despite this influx of time, especially in the last year, not every gamer can drop everything to play a game. This is why hyper-casual games with social mechanics are ideal.

Each player can choose to make a move whenever they feel (or have time). This makes for a very casual gameplay experience. You can even go one step further and just watch others play video games. The rise of platforms like Twitch means that you can be in the audience and still enjoy gameplay from a different perspective.

These games require the player to move on a track or move out of the way of oncoming hazards. All of these mechanics are intended to keep users entertained and engaged within gameplay. The more time invested into a game, the more players might be willing to invest in other resources, like in-app purchases.

As far as notable games go, the start of the hyper-casual gaming buzz has to be attributed to the aforementioned Flappy Bird. Launched in May 2013, the game had generated 50 million downloads by January 2014*. However, this viral success — the game earned $50,000 a day, on average, from in-app ads* — was short-lived. The game was removed by developer Dong Nguyen in February 2014.

If you cast your mind back even further, you could technically list games like Tetris, Pong, Breakout, and Pac-Man as hyper-casual games. The problem with these games is that they initially required game consoles and computers to play them. However, that is no longer the case — you can now play classic games like Tetris (currently #10 in Strategy on the App Store) on your mobile device in addition to modern favorites like these three hyper-casual games. 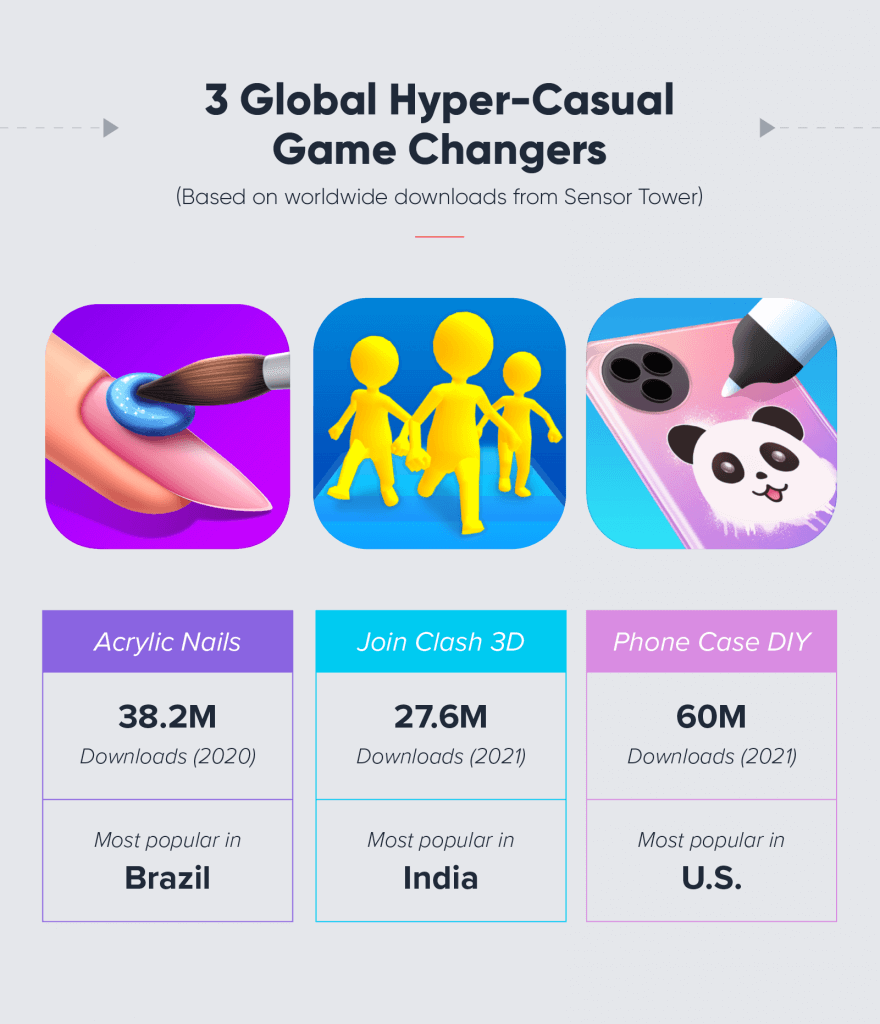 If the average gamer is spending 8 hours and 27 minutes a week playing video games, it’s likely that they are playing hyper-casual games for a good portion of that time.

Whether your app serves the hyper-casual gaming market or any other category, it’s fair to say that this genre, as well as the mobile gaming industry as a whole, has found loyal and devoted user bases around the world. With millions of apps available in Google Play and the App Store, there is definitely not a shortage of hyper-casual games and that isn’t about to change. Check out the below infographic for even more information on hyper-casual games.