What are Interstitial Ads and How To Use Them Without Penalty

Interstitial ads are injecting themselves into the user experience of websites, apps, games, and more. These ads are meant to be placed organically within the user journey while still separating the UX from the advertising component.

These interstitials have been praised by those who appreciate a clear delineation between an app and its business decision to advertise. Others, however, are less enthusiastic about them, which is one of the reasons Google has placed penalties on intrusive interstitial ads.1

In this article, we cover everything you need to know about interstitial ads, the penalties you want to avoid, and tips to improve your placements.

What are Interstitial Ads?

Interstitial ads are full-screen placements between standard interactions in the user experience of a site, app, or game.

For example, navigation between two articles on a news media website or the transition between levels of a hyper-casual game can warrant one of these ads. 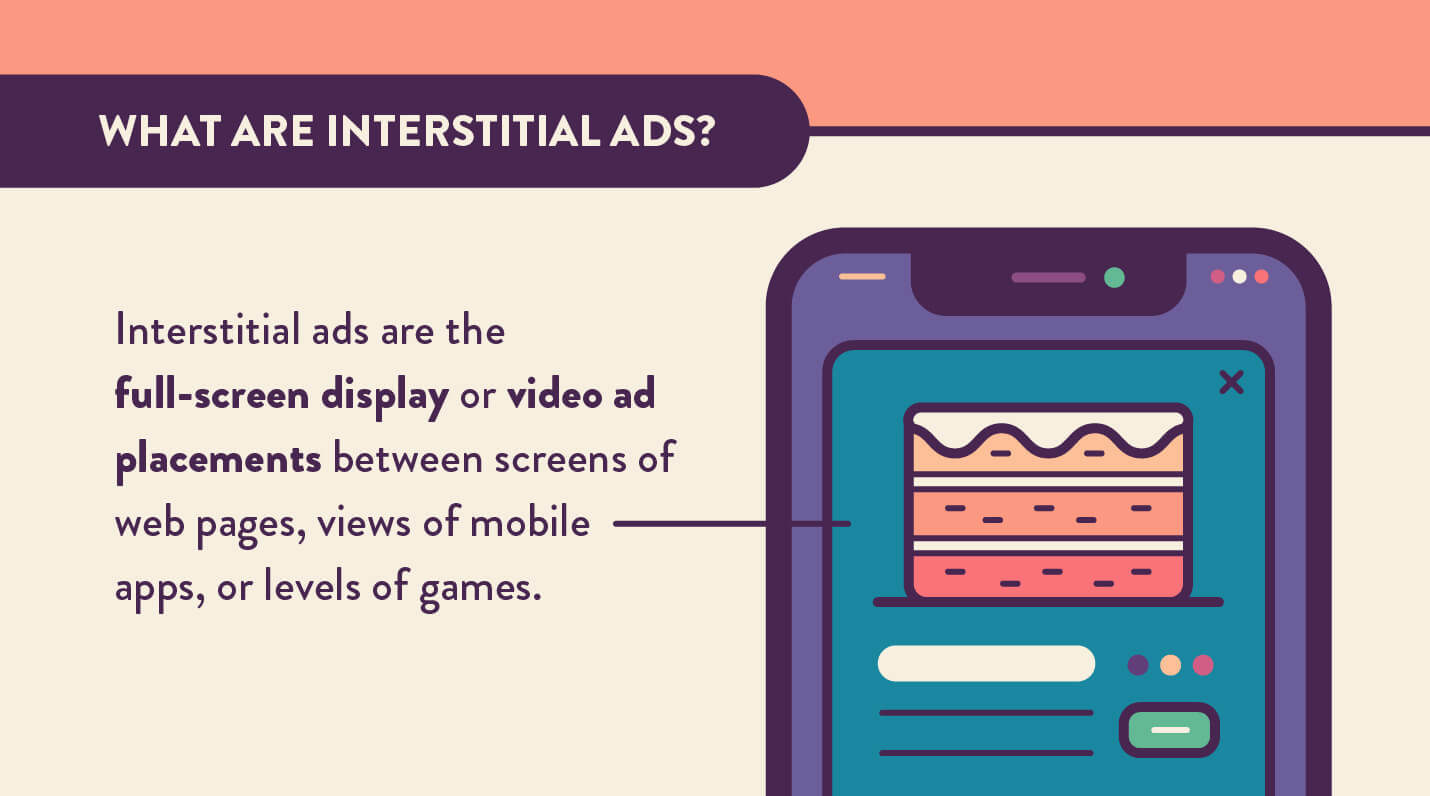 Games frequently use interstitial ads out of necessity. Most games, especially mobile games, require the entire viewport for the user interface. This prohibits them from using banner ads and pop-up ads.

Interstitial ads are a win-win. Advertisers love the full-screen attention and app developers appreciate the distinction between their product and an ad. In an attempt to cut down on the overuse of interstitial ads, however, Google has outlined a policy for ensuring the user experience is not inundated with interstitials.

Interstitial Ads: The Penalty for Intrusiveness

Google is paving the way for a better ad experience. It may seem counterintuitive for Google — a business built on serving ads — to put restrictions and penalties on ad placements, but that is exactly what they have done.

When considering the user experience for search, 69% of smartphone users reported being more likely to buy from companies whose mobile sites or apps help answer their questions quickly.2

In 2017, Google released mobile interstitial penalties in an attempt to prevent frustration among users. They outlined the main avoidances as:

Although it may hurt ad revenue in the short term, it is in Google’s best interest to prohibit intrusive advertising to keep the user’s search experience as seamless as possible. 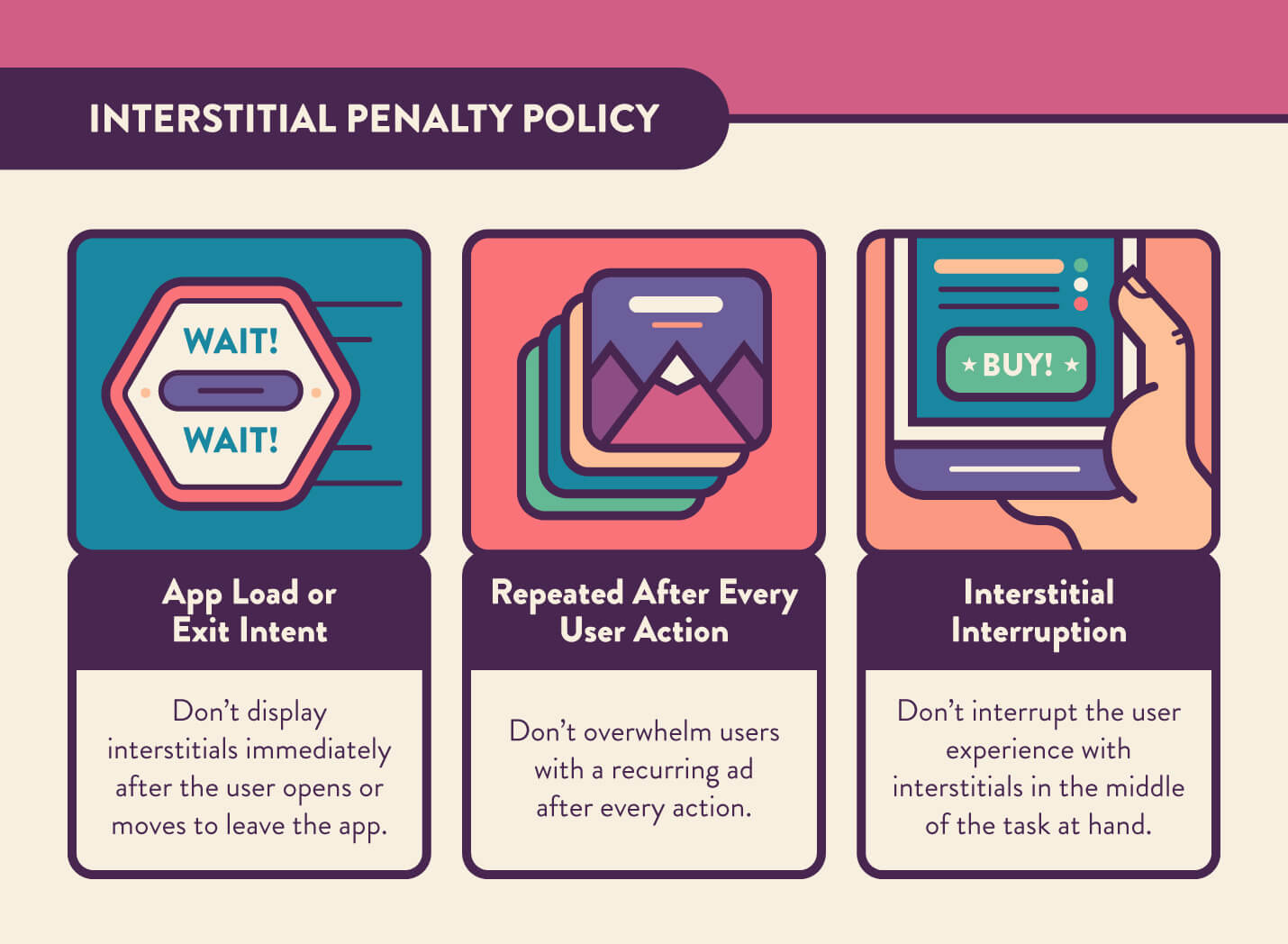 There are, however, some forms of interstitials that are universally acceptable. We cover those next.

You must be 21 years or older to buy these cookies.

Some websites and apps have minimum age requirements and require you to approve cookie tracking per GDPR. These are usually the work of interstitials, and although they may be as frustrating as an unwanted advertisement, they are unanimously agreed upon as necessary.

One of the permissible forms of interstitials does not advertise a new product or service at all — instead, it advertises your application’s use of cookies to track and store user location and activity. The user must consent to cookie tracking before proceeding to the main content.

GDPR is a law enacted in the European Union with the intention of giving users more power (and hopefully protection) over the data they provide websites. Consent is currently required anywhere within the EU or you could face fines in the millions of dollars, depending on the size of your business.

Websites have an age requirement?

If, for example, you navigate to the website of your favorite alcoholic beverage (you’re 21, right?), you will be asked to input your birthday to prove you are over the legal drinking age. These interstitial consent forms are not only approved but mandated by law.

High-end news and media sites employ interstitial ads as a means of blocking user access to content without first paying. These paywalls are common for sites who have invested substantial resources into content creation. 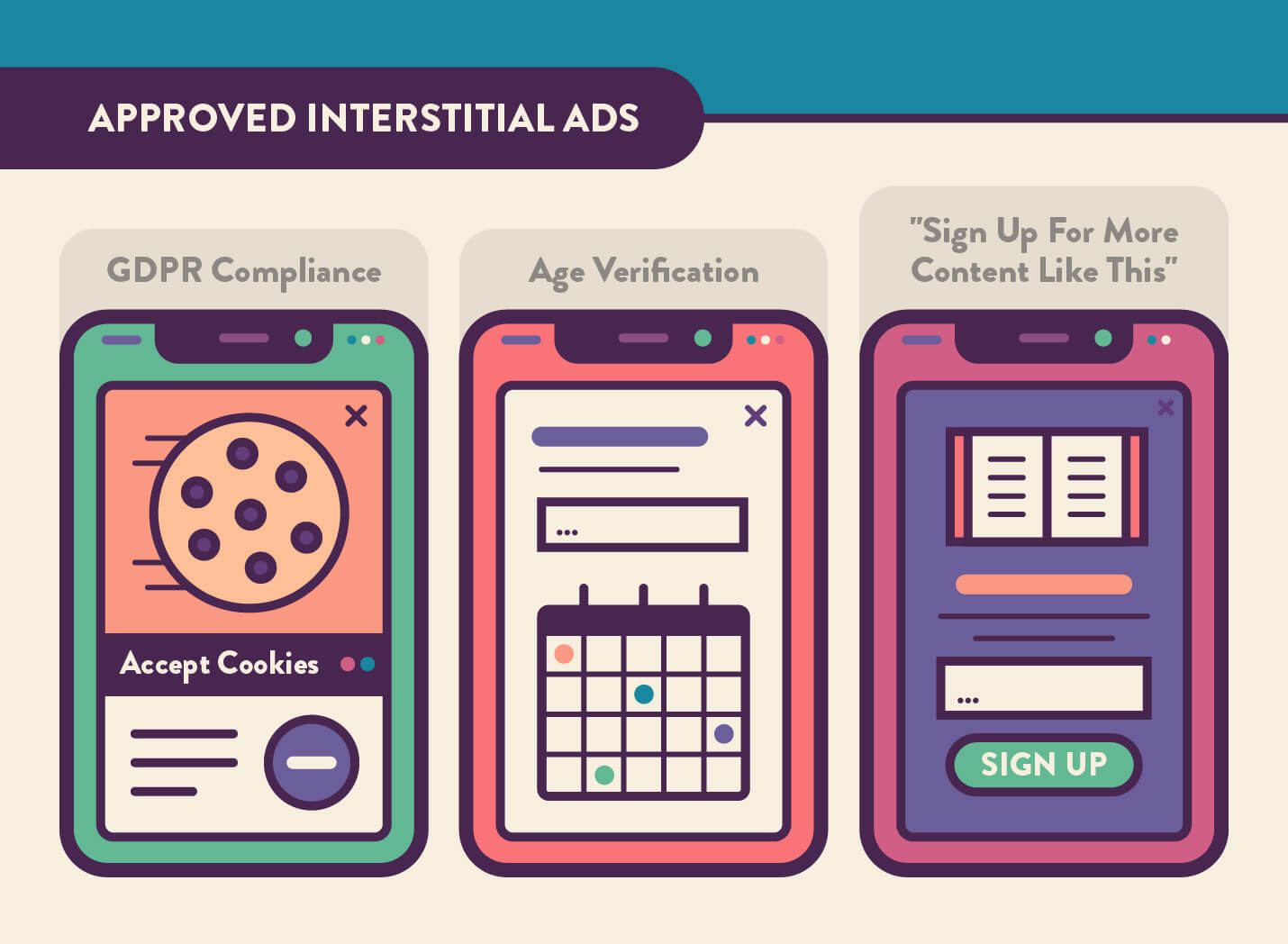 These are generally accepted practices for interstitials but how can we make all interstitial ads less invasive and more acceptable to users?

How can we, as marketers, provide the best experience for more users? It boils down to a fundamental principle: Don’t be annoying.

Digital marketers and advertisers have a few tools in their utility belt to reach their audiences: placements such as banner ads, pop-up ads, and of course, interstitial ads.

Banner ads typically live in constant view of the user while (hopefully) not intruding on the user’s experience. Pop-up ads usually come in the form of modals, which block a substantial part of the user interface and require action before being dismissed. 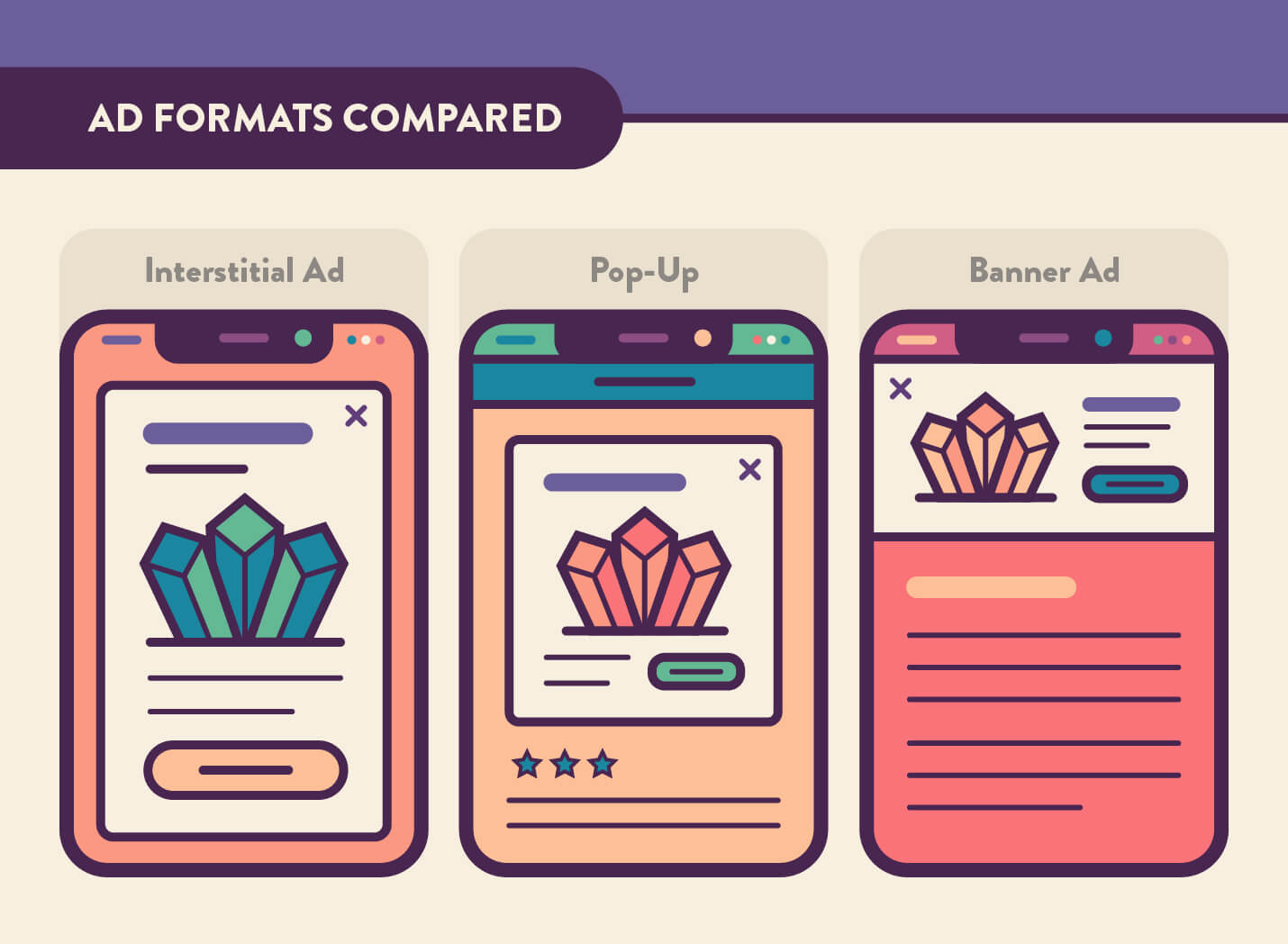 Many people believe the rise in usage of ad blocker software is a signal that users are fed up with advertising in its entirety. It’s more likely a result of the rise in “abusive” advertising, where the user is inundated with banner ads, followed by pop-up ads, followed by interstitial ads, and requests for push notifications, email sign up forms — the list goes on.

These “bad actors” are why Google had to step in and create an intrusiveness penalty. So what are some of the best practices for interstitial ads?

Are they hard and fast rules, or mere guidelines?

Many sites continue to display interstitial ads that Google would classify as intrusive. They simply face the repercussions from a rankings perspective on the search results page.

Even if search engine optimization or app store optimization are not strategies your business relies upon, you should consider following the guidelines for interstitial ads set by the device’s operating system.

Users are easily offended by advertisements. You must balance the short-term marginal increase in ad revenue from displaying another ad with the long-term customer lifetime value. We’re willing to bet the latter is more valuable to your business model and it’s pretty well established that retaining customers is less expensive than acquiring new customers.3

If the operating system guidelines aren’t enough motivation to keep your interstitial ad practices in tip-top shape, perhaps users will act as your north star.

Users are entitled — and rightfully so. Your users are responsible for your app’s success and it’s ultimately them who you need to impress with your advertising practices. Your users will tweet at you when they’re upset with the ad or worse, uninstall your app and move on with their ad-free (reduced*) lives.4

Don’t overwhelm users with prestitial ads, interstitial ads, pop-up ads, banner ads, or even post-stitial ads (if there is such a thing).

There are very few things as frustrating as searching for the exit button on an interstitial ad. Perhaps the only thing more so is when you find it and realize it has intentionally been obscured from view.

Most people understand that an ad-supported product is why it’s free for them to use, which is why many people opt for the freemium, ad-driven product compared to the ad-free premium version. It’s when the ads become a frequent interruption and deterrent from the app’s functional value proposition that they become an issue.

Many companies opt for a timeout feature where the ad must be viewed for a certain duration before being able to skip or exit. It’s important to clearly display how long the ad will show, the option to skip when available, and the option to exit.

Do not camouflage your interstitial ad exit button with muted colors or blocking elements. 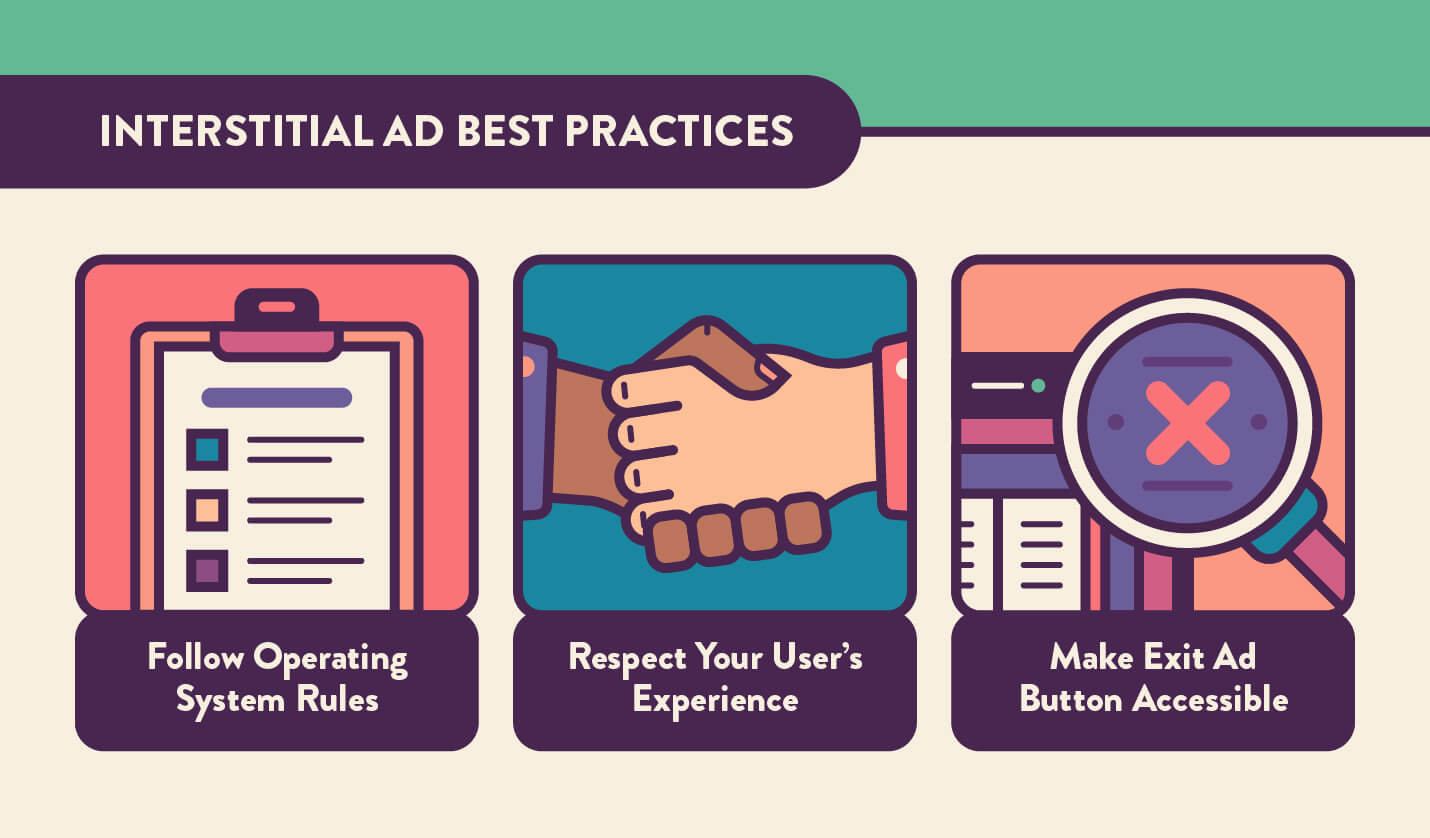 The rise of mobile advertising is projected to surpass $200 billion this year.5 Most companies operate and advertise in good faith, which makes it imperative we continue to keep our advertising practices in check.

Not too long ago, internet users were almost constantly playing a game of whack-a-mole with pop-up ads. The inventor of the pop-up ad even apologized for his creation. But we really cannot place the blame on him, it’s more on the shoulders of advertisers who let this happen.  Let’s not make the same mistake with interstitial ads.6

If you want to measure the real impact of your marketing and interstitial ad strategy, the toolkit included in CleverTap’s mobile marketing platform will help you gain the actionable insights you need to be successful. Learn more and sign up for a live demo now.