Over 6 billion emojis are sent every day.* We use them for casual messages, quick reactions, one picture replies, and as a way to inject zest, emotion, or humor into our conversations.

Emojis were first created in the late 1990s by Shigetaka Kurita, who invented the language out of frustration with plain text information.* Kurita realized that he’d rather see a picture of a shining sun than text saying “the weather is fine.”

He and his team created a set of 176 pictographs, each 12×12 pixels, that could encapsulate a series of human emotions. Today, that initial set of 176 has exploded into over 3,300 official emojis.*

Continue reading to learn more about emojis or jump straight to our infographic.

What is an Emoji?

Emojis, or emoticons, are visual representations of emotions, objects, or symbols. They’re digitally rendered on web and mobile devices to communicate a message.

Emojis are logographic in nature, meaning every single emoji represents a word or phrase. Emojis have grown in usage and popularity with the rapid adoption of smartphones and the rise in SMS text messaging. In fact, over 5 billion emojis are sent within messenger.1

The earliest emojis originate to the late 1990s on early Japanese mobile phones, and quickly gained popularity within the conversations of teenagers.2

Although emojis are used globally today, it was not always clear that they would transcend the Japanese market. When Apple released their iOS 2.2 update, the emoji keyboards were made available exclusively for users in Japan. It wasn’t until 2011 that Apple opened up emojis internationally.

As with most other pop culture trends, marketers attempt to connect with customers over the common ground of shared interest — and emojis are no different. Marketing teams across nearly every industry have adopted emojis … but should they?

After analyzing more than 191 million push notifications using emojis, we discovered some key insights into emoji usage across industries.

Some industries were able to include emojis in push notifications and enjoy an increase in click-through rate (CTR) by 100x, while other industries saw their CTRs cut in half.

In a previous study of over 40 billion push notifications, we found the benchmark click-through rate across all industries to be 2.74%.

In this emoji data study, we discovered the average CTR to be 3.48%, an industry-wide average increase of 38%. Although these results look great on the surface, depending on the industry, the numbers tell a different story.

The top three industries that stand to benefit from implementing emojis within their marketing campaigns are:

Mobile apps within the business and finance industry who use emojis in their push notifications experience a 128% boost in CTR. 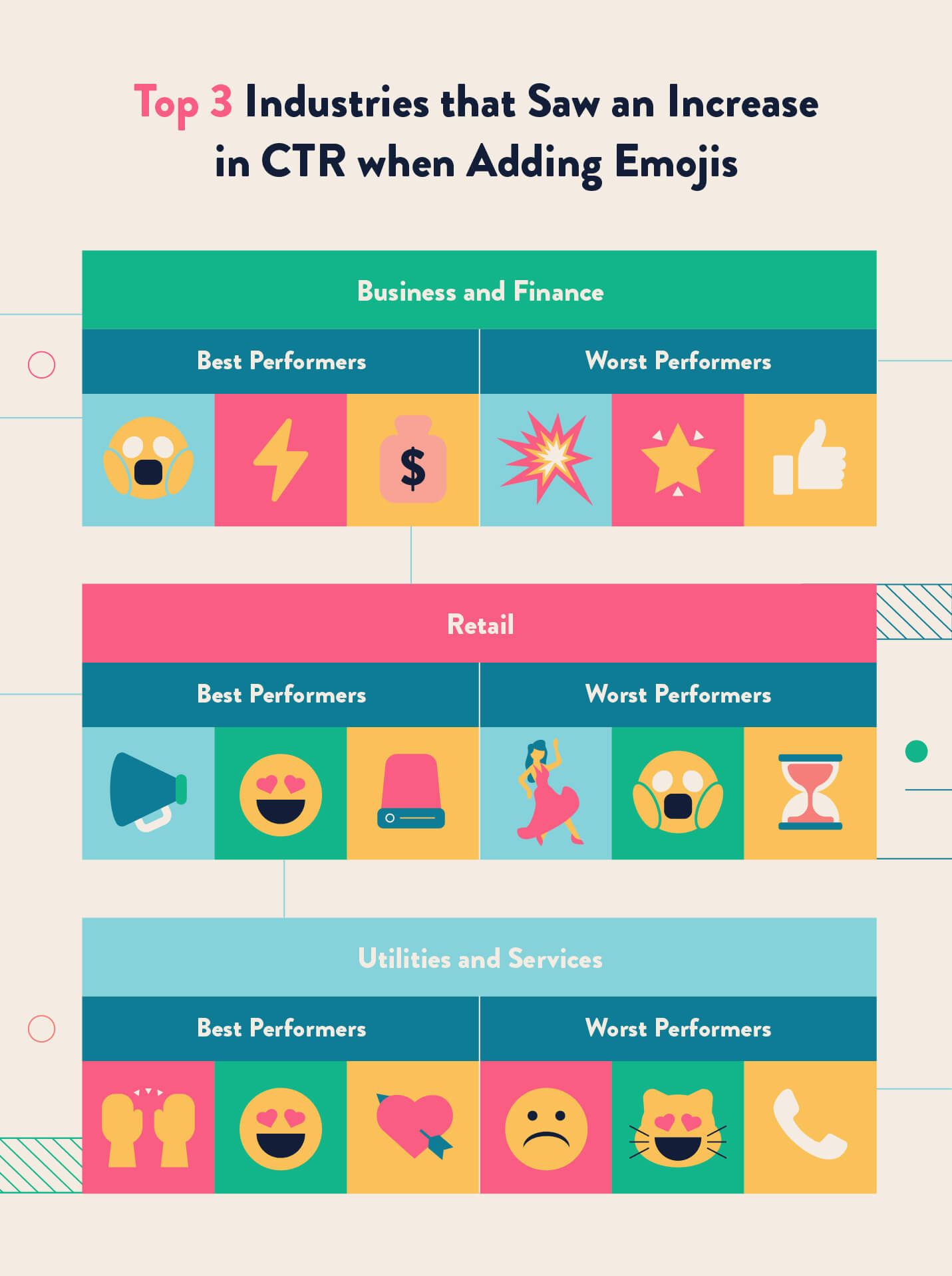 Possibly the most unlikely industry to benefit from emojis is utilities and services, who witnessed their CTR soar by 115% after including emojis. The third largest increase in CTR after using emojis is retail with an 111% boost.

The three industries in which emoji usage most negatively impacted marketing campaigns are:

All three of these industries are examples where many teams might intuitively believe emojis would perform well. Our data revealed the opposite. 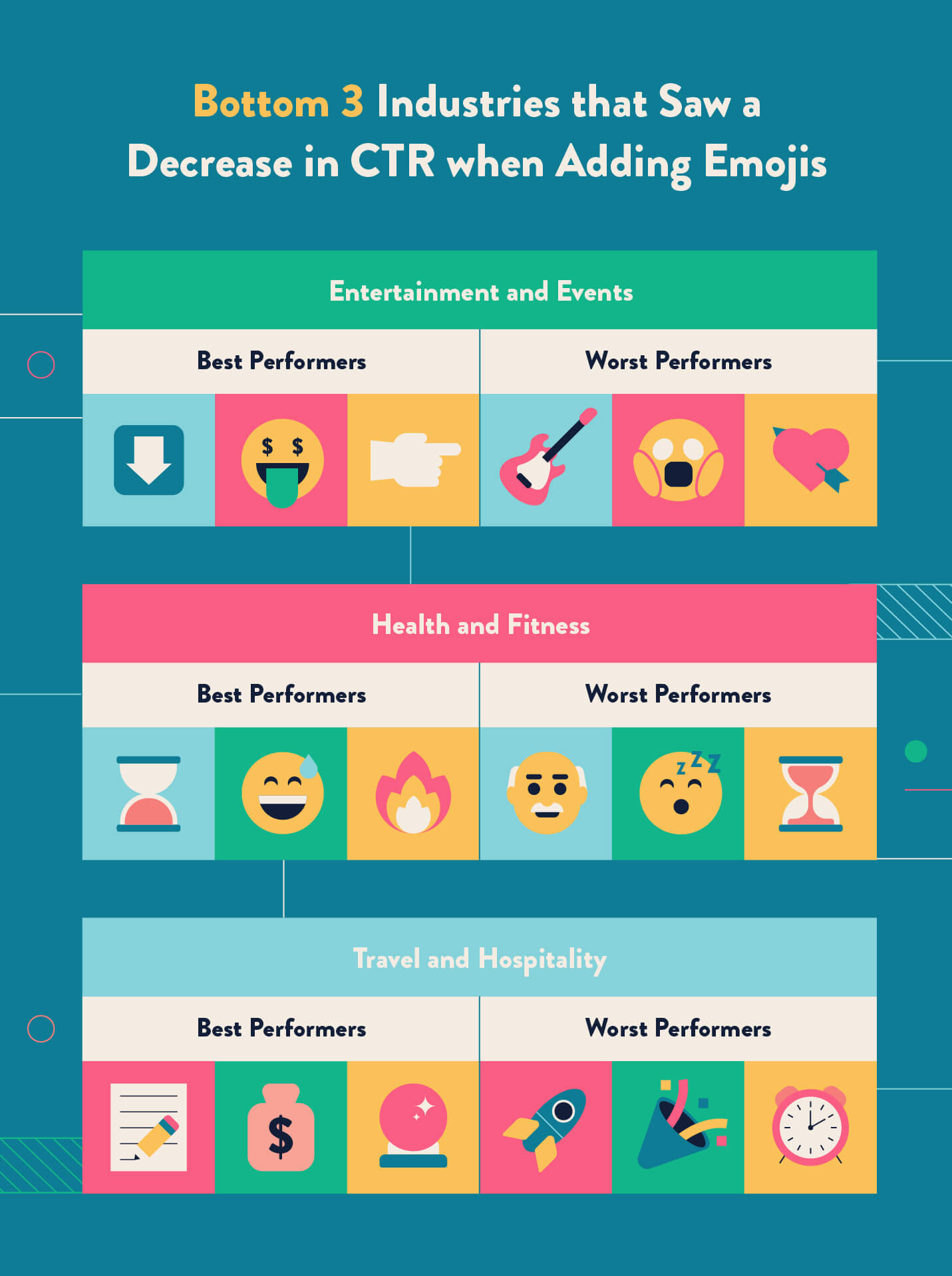 Push notifications sent from entertainment and events mobile apps saw a decline of 54%, travel and hospitality a decline of 12%, and health and fitness a decline of 4% in CTR compared to their industry averages.

When analyzing the best and worst performing emojis in the health and fitness industry, it appears users are more likely to respond favorably to emojis that represent the completion of a task or workout. The emojis that represent aging, staying asleep, and time passing— which all seem to indicate a lack of exercise—do not perform well within this industry.

Emojis in Marketing and How to Use Them

Depending on the industry, different emojis can perform well while others can turn ? into real life.

In some cases, the same emojis used across different industries can have very different results. For example, the “money bag” emoji (?)was one of the most used emojis industry-wide. This emoji was included in 5.91% of push notifications across all industries.

The industries that saw the “money bag” perform well were events and entertainment, travel and hospitality, and food delivery. Push notifications that included the “money bag” emoji within the health and fitness industry however, fell in the bottom 25th percentile of CTR performance.

Although the “thumbs up” emoji (?) was repeatedly used in push notifications that performed in the top 25th percentile of increased engagement, it was almost equally as prevalent in the bottom 25th percentile.

There are also emoji outliers that found breakout success within various campaigns and industries, but were not strong performers in any other industry. The “face screaming in fear” emoji (?) was the top performing emoji within business and finance push notifications — which contributed to the overall industry CTR increase of 128%. This same emoji used within another industry resulted in an average CTR across Android and iOS of only 0.0016%.

The Most Popular Emojis in Push Notifications 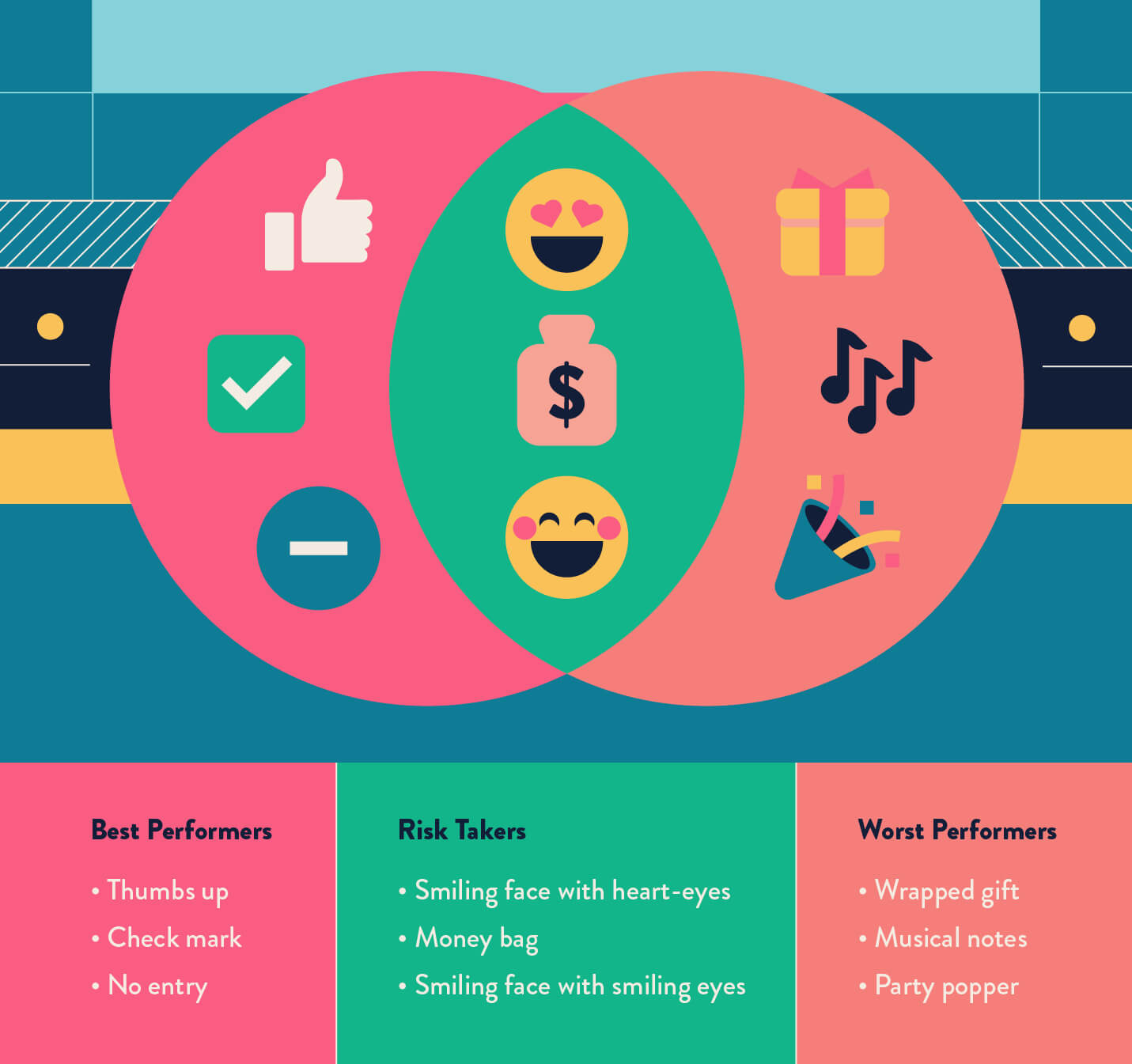 Out of the 4 billion push notifications sent, 12.48% of them included the “thumbs up” emoji (?). This is by far the most popular emoji within our study. The second most popular emoji is the “smiling face with heart-eyes” (?) which was sent in 6.88% of all push notifications. The “money bag” emoji (?) was included in 5.90% of the total emojis sent.

To put these in perspective, the average emoji was included in only 1.52% of push notifications. The “thumbs up” emoji stood out in this study as not only being one of the most popular emojis, but also a top performer when considering CTR. The “smiling face with heart-eyes” and the “money bag,” although widely used, had mixed results.

According to our findings, companies are finding success implementing emojis within their push notification strategy, while others are experiencing lackluster results. Depending on the industry, the market may react differently to particular emojis or emojis in general. Analyzing and learning from the data within this emoji marketing study can help you optimize push notification campaigns within your business and industry.