Loved it? Get this in your Inbox

Get my Copy
Case Studies

In less than three years, ZEE5 has grown to become the world’s largest streaming platform for South Asian content. They initially launched in India in February of 2018, and by October of that year, they were offering their service to 190+ markets — a first for an Indian OTT platform — making it the third-largest OTT platform globally with this geo-scale. Within a few weeks of launch, the platform had become the No.1 entertainment platform in key SAARC markets.

ZEE5 is now the preferred entertainment platform for millions of users across APAC, the Middle East, the UK, and Europe, winning not only audiences but also awards and accolades along the way.

Recently launched in the U.S. and quickly building out its presence in Canada, it is today the only seamless streaming destination for ‘Desi’ content in the market, offering South Asian (Indian, Pakistani, and Bangladeshi) content at the scale of 170,000 hours and across 18 languages.

Major KPIs for the team include the number of views and subscriptions, DAUs, MAUs, and the percentage of retention win back.

“With the earlier platform we used, we had different panels for different time zones. This meant that we had to build multiple variations of a single campaign just so that it could be sent on different panels,” explains Bedi.

Building multiple variations added challenges to their operational efficiency and the team was on the lookout for an effective solution. Additionally, with their existing platform, they had to create separate campaigns for Android and iOS devices.

Their previous engagement partner did not come with built-in user analytics. Which meant they had no way to understand how their campaigns performed, particularly across geographies. They were unable to measure the impact of their campaigns on subscription rates.


Engaging Users Across the Lifecycle

ZEE5 brings in a large number of users with every new movie or TV show they release. There is a huge opportunity for the team to engage with a user across the customer lifecycle to increase the time spent on the app and consequently, increase the number of subscriptions.

Their customer engagement partner did not have an intuitive drag-and-drop journey builder, hindering their ability to engage with the user right from the onboarding stage.

ZEE5 offers content in 12 regional Indian languages including Hindi, Tamil, Kannada, Marathi, and Bengali apart from 6 international languages. This means ZEE5 needs to market to their users based on their preferred language. CleverTap’s automated segmentation enables them to create segments based on user properties such as language.

Another layer of segmentation is performed based on user behavior. “For instance: we’re running a campaign that is sending a survey to our iOS users who’ve viewed at least 10 videos in a certain time,” he adds.

If a user has added a movie or a TV show to their watchlist and hasn’t watched it within 24 hours, the ZEE5 Global team sends the user a notification reminding them of the new addition to the watchlist. “Also, if a user starts viewing content and drops midway, we have a triggered campaign which reminds the user that the most interesting part in the episode is yet to come,” says Bedi.

“In the last 90 days, we’ve performed over 200 A/B tests for our campaigns where we tested emojis and variations in the heading and body. We’ve also gone ahead and experimented with the heading format. Do we keep the headings crisp and short? Do we keep them open-ended?” says Bedi about ZEE5’s A/B testing methodology.

The team has also experimented with different versions of images and tested campaigns with and without images. “Furthermore, we’ve tested sending a campaign in the user’s time zone versus sending at the best time for every user feature,” he mentions.

As their user base is spread out across the globe with unique app usage patterns, finding the best time to send messages to users manually is not a feasible solution. If user A, located in London is a night owl who consumes content to unwind and user B, located in Mumbai consumes content during the weekend, how could they connect to the users at their preferred viewing time?

Thanks to CleverTap’s best send times which combines data science with machine learning, connecting with users at their preferred time is now a breeze. 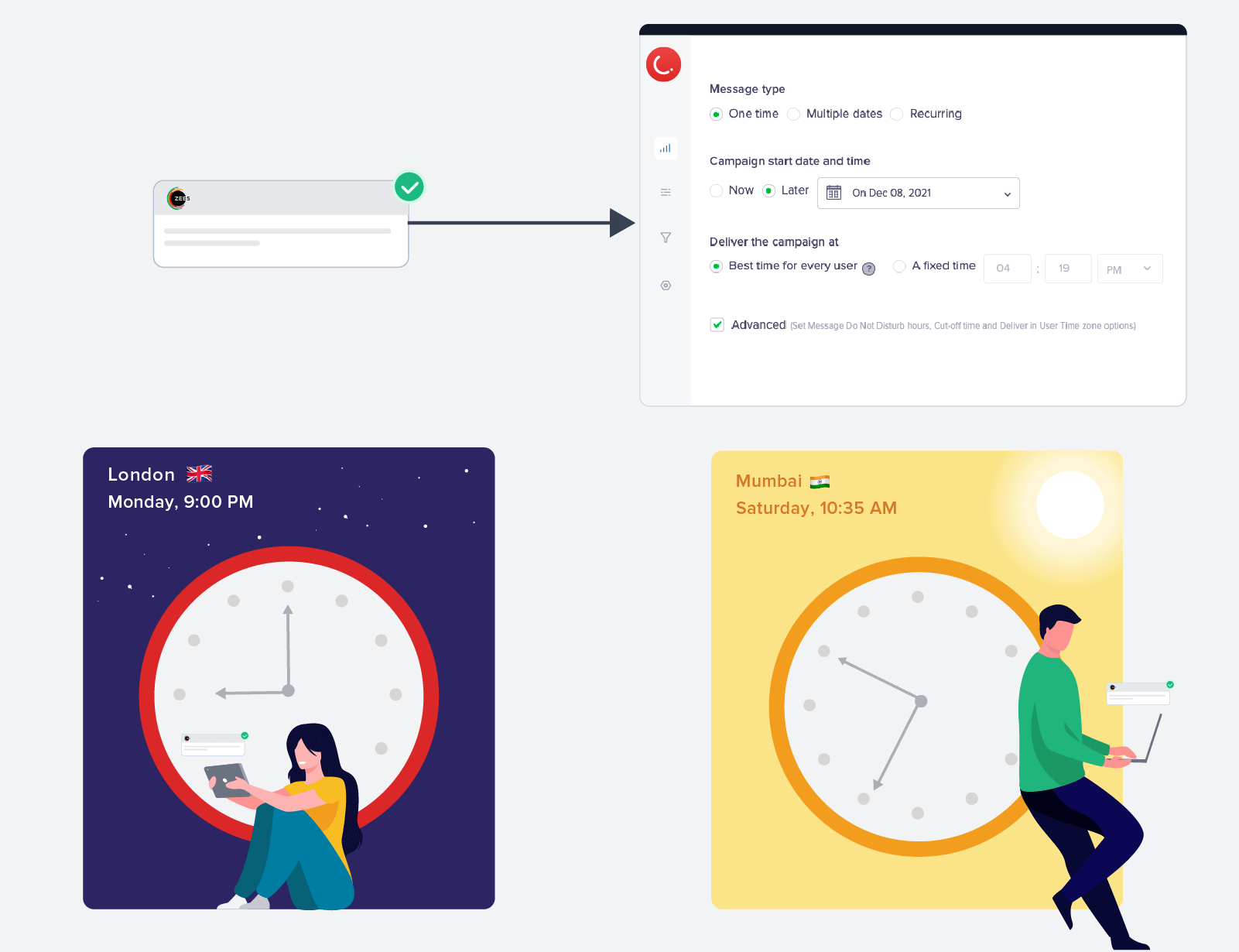 “With CleverTap coming on board, we don’t have to create multiple campaigns to connect with users across the entire globe. Reaching out to a user based out of Canada or Bangladesh or the UK can now be done through building a single campaign and adding the best send time option” says Bedi.

Automate Journeys to Engage Users Across the Customer Lifecycle

The journeys built by the ZEE5 Global team are interconnected so that users are not added to multiple journeys or overwhelmed by communication. A user who installs the ZEE5 app is a guest user. The guest user receives ads while viewing content on the app. User registration is optional and once the user registers, the user is added to the onboarding journey where the end goal is to ensure the user subscribes.

An important journey for the ZEE5 Global team is the cart abandonment journey. This journey is for users who have stayed on the subscription page for a while but haven’t subscribed.

Another one is directed towards guest users who have watched videos on the platform but haven’t returned in the last 3, 5, or 9 days. “Also, we have a win-back journey for users who are churning or have churned. We send notifications to the user at a T-1, T, T+3, and T+5 intervals,” explains Bedi.

As a part of their pre-campaign analysis, the CLM team relies on trends and pivots to understand user consumption patterns and nuances. This helps the team predict user interests and answer questions like: At what time is the content being consumed across the globe? How are users in a particular location responding to a particular type of content?

“For instance, a user in the UK views content on the app at X hour. While a user in Bangladesh views it at Y hour. Knowing this helps us schedule our campaigns accordingly” says Bedi.

The team uses funnels after the campaign is launched to understand how they fare. Furthermore, funnel analytics help them understand referral attribution better and see which channel brings in the most viewers. Funnels also help the team understand how a user flows through the app and where they drop off before a conversion event.

Using the best time feature has resulted in a 60% boost in CTRs when compared to not using the feature. Additionally, the team has seen a 20% increase in its in-app conversion rate. When compared with the control group, their recurring campaigns have seen a lift in CTRs of 8%.

The success of ZEE5 is based on their commitment to providing extensive content in multiple languages that cater to multiple audience segments and varied cohorts across the globe. Knowing that every viewing experience is unique, the company recognizes the need for a highly individualized marketing approach. To make every viewer experience personalized, ZEE5 is building out deep, data-led marketing strategies and communications to market to a segment of one, using the extensive tools and features that Clevertap offers.

This will enable them to offer unique experiences across the lifecycle to better engage and retain customers and drive a more customer-centric approach, furthering their goal of becoming the world’s foremost platform for South Asian content.

Loved it? Get this in your Inbox

Talk to our growth experts today to see how you can begin your retention journey with CleverTap.
Get Started

Resources that help you grow