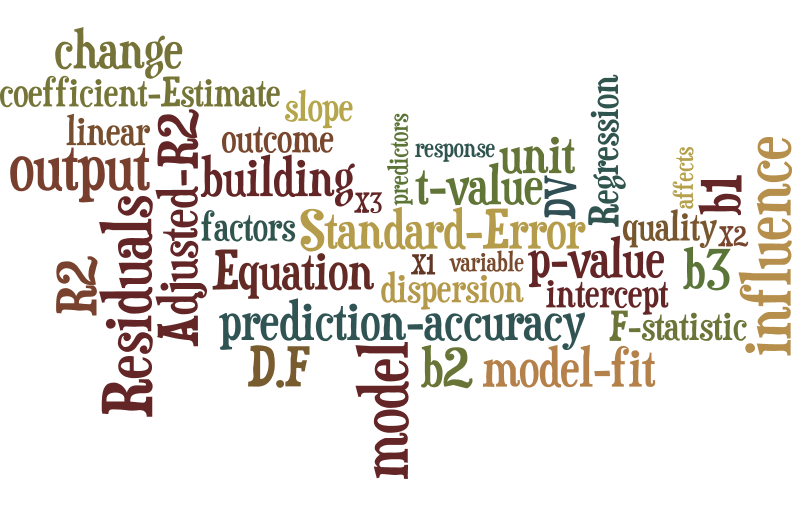 In Part I, we learnt the basics of Linear Regression and in Part II, we have seen that testing the assumptions in simple and multiple regression before building a regression model is analogous to knowing the rules upfront before playing a fair game.

Building a regression model involves collecting predictor and response values for common samples, exploring data, cleaning and preparing data and then fitting a suitable mathematical relationship to the collected data to answer: Which factors matter the most? Which factors we can ignore?

In the linear regression model, the dependent variable is expressed as a linear function of two or more independent variables plus an error introduced to account for all other factors, as mentioned below:

Prior to building any predictive model, the data exploration and preparation stage ensures that every variable is in the form as desired by model. The next step is to build a suitable model and then interpret the model output to assess whether the built model is a good fit for the given data.

As a quick recap of our height – weight dataset, a sample of 10 rows of this dataset has been displayed below:

Let’s work on fitting a linear model to the above dataset by using height, calorie intake, and exercise level as predictors for predicting the response variable – weight of an individual and then derive valuable insights by interpreting the model output.

The model output for our height-weight example is displayed below:

This output includes a conventional table with parameter estimates and their standard errors, t-value, p-value, F-statistic, as well as the residual standard error and multiple R-squared.

Now we define and explain briefly each component – marked as #1 – #10 in the above model output.

The Residuals section of the model output breaks down into 5 summary point measures, to help us assess whether the distribution of residuals is normal i.e. bell shaped curve across the mean value zero (0).

In our case, we see that the distribution of the residuals do not appear to be strongly normal as median is to the left of 0. That means the model predicts certain points that fall far away from the actual points.

#2 Estimated Coefficients – are the unknown constants that represent the intercept and slope terms in the linear model. The estimated coefficient is the value of slope calculated by the regression.

As in the above table, the coefficient Estimate column contains two or more rows: the first one is the intercept and the rest rows are for each of the independent variable(s).

#3 & #8 Standard Error of the Coefficient Estimate & Residual Standard Error – are just the standard deviations of Coefficient Estimate and Residuals. The standard error of the estimate measures the dispersion (variability) of the coefficient, the amount it varies across cases and Residual standard error reflects the quality of a linear regression fit. Lower the standard error, the better it is, for accuracy of predictions. Therefore, you would expect to observe most of the actual values to cluster fairly closely to the regression line.

For example, to decide among the 2 datasets of 10 heights having same mean of 69 inches but different standard deviations (SD) – one with σ = 2.7 and the other one with σ = 6.3, we should select the dataset with σ = 2.7 to use height as one of predictor for creating predictive model.

In our example, the std error of the height variable is 0.262 which is far less than the height Coefficient – Estimate (3.891). Also, the actual weight can deviate from the true regression line by approximately 8.968 lbs, on an average.

#9 Multiple R-squared & Adjusted R-squared – The R-squared statistic (R2), also known as Coefficient of determination, is a metric used to evaluate how well the model fits the actual data.

R2 corresponds with the proportion of the variance in the criterion variable which is accounted for, by the model.

R2 tends to somewhat over-estimate the success of the model since it automatically and spuriously increases when extra explanatory variables are added to the model. Adj. R2 corrects this value to provide a better estimate of the true population value by taking into account the number of variables and the number of observations that goes into building the model.

where p is the total number of variables in the model (excluding the constant – Intercept term), and n is the sample size.

While choosing between two models, it’s better to choose the one with higher adj. R2. However, this higher value doesn’t necessarily indicate the accuracy of the predictions and the adequacy of the regression model.

In our case,  ~80% of the variance in the response variable (weight) is explained by the predictors (height and calorie intake). Intuitively also, by knowing these values – height, calorie intake – we would be able to predict the weight of an individual quite well, as also reflected in the obtained relatively strong R2 value.

#4 – #7; #10 t – value of the Coefficient Estimate; Variable p – value, Significance Stars and Codes; F-statistic with Degrees of Freedom and p-value – are the terms used to assess the model fit and the significance of the model or its components through the statistical tests.

t – value of the Coefficient Estimate –

is a score to measure whether or not the regression coefficient for the variable is meaningful for the model i.e. the coefficient is significant and different from zero.

The t-statistic value is computed as:

In our example, the t-values of height, calorie intake are relatively far away from zero and are large relative to the standard error, which could indicate an existence of the relationship.

p-value indicates a probability that the variable is NOT relevant i.e. Pr(>(|t|) acronym in the model output. A small p-value indicates that it is unlikely that a relationship between a predictor (say, height) and response (weight) variables exists due to chance. Generally, a p-value of 5% or less is considered as cut-off point.

In our example, the p-values for height and calorie intake are very close to zero (indicated by ‘***’ in the table), suggesting that it is likely that significant relationship exists between height, calorie intake and weight of the people – with the obtained coefficient estimates – different from zero.

It is often trickier to spot a bad model rather than identifying and selecting a good model.

Multiple regression analysis is not only the most widely used tool but also the most abused one. Furthermore, the sensible use of linear regression requires one to check for any errors in variables, treat outliers and any missing values, validate the underlying assumptions for any violation(s); determine the goodness of fit  and accuracy of the model through statistical tests; deal with potential problems that may occur in the model and the difficulties involved in rigorously evaluating the quality and robustness of the model fit. Linear regression is important because it is the basic model used by many analysts to compare with other complex models to generate data insights.