What is App Localization? And How Does it Compare to Internationalization?

Tailoring your app’s interface to meet varying cultural and language expectations is a must. Users want to feel that the apps they download are created natively for them, and having obviously incorrect terminology or culturally insensitive content is a huge turn-off.

You might be thinking, “I’ll just use Google Translate!”

When you input the word “download” into Google Translate to create your call-to-action button, you will get some interesting — and questionable — results. In German, “downloaden,” in Spanish, “Descargar,” and our all-time favorite: “LIKE LIKE LIKE” in native Hawaiian.

This is just one example of the complications that can arise when localizing apps for different areas of the globe. In this piece, we’ll examine why app localization is essential for expanding into new markets. 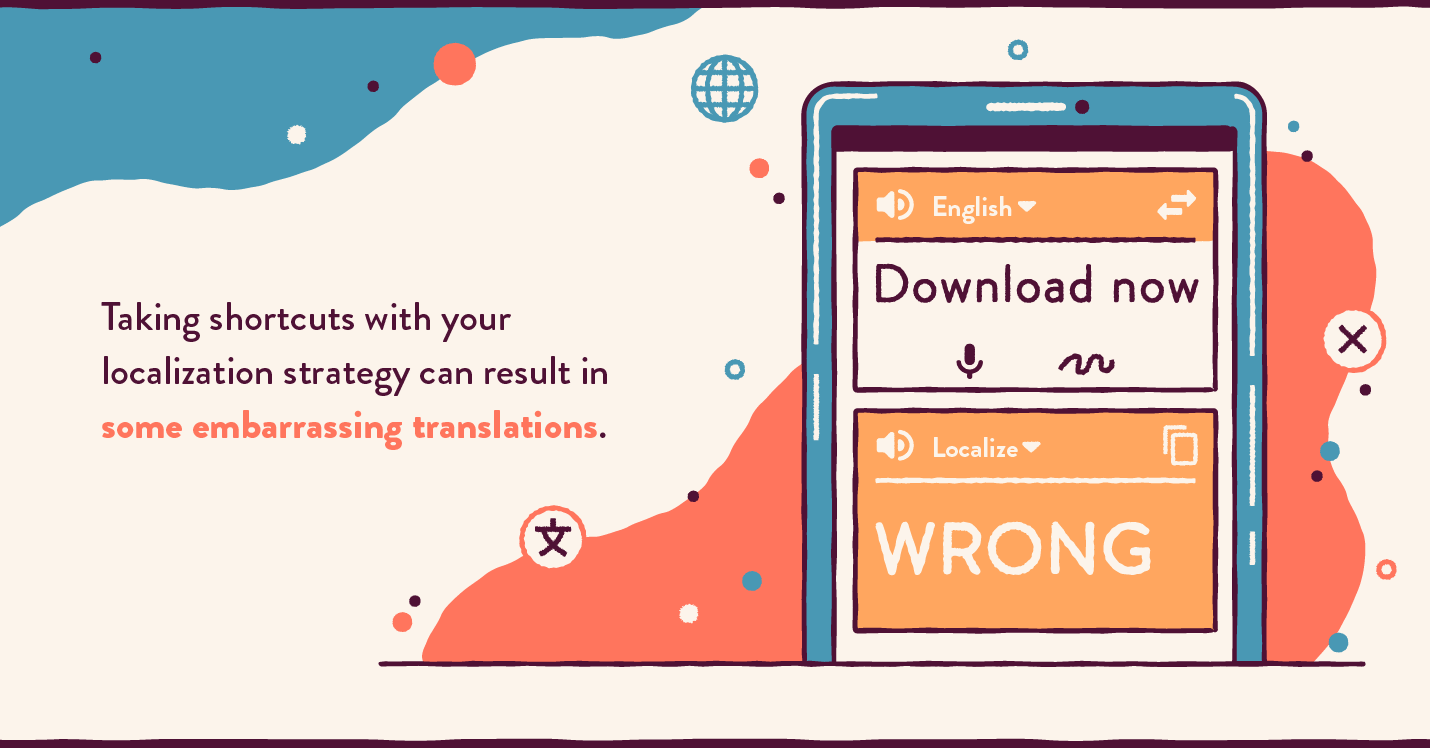 What is App Localization?

App localization is the process of changing and refining an app in order to appeal to a geographically specific target market. You want to make sure that your app is as appealing and easy to use outside your headquarters’ country as it is within.

Though translating the language of your app is a huge part of this, there are also cultural rules and preferences that are more difficult to pin down. Certain symbols or gestures may be innocuous in the U.S., but could actually be very offensive in another country. Regardless, these can be huge factors in the success of your app abroad.

Why is App Localization Important?

App localization enables your app to fit the needs of users who speak other languages so that everything from units of measurement to currencies and idiomatic expressions are optimized for them.

By ensuring that your app is appealing to users in a wide variety of locations around the world, you create a tremendous opportunity for growth that you never could have achieved within just one country. 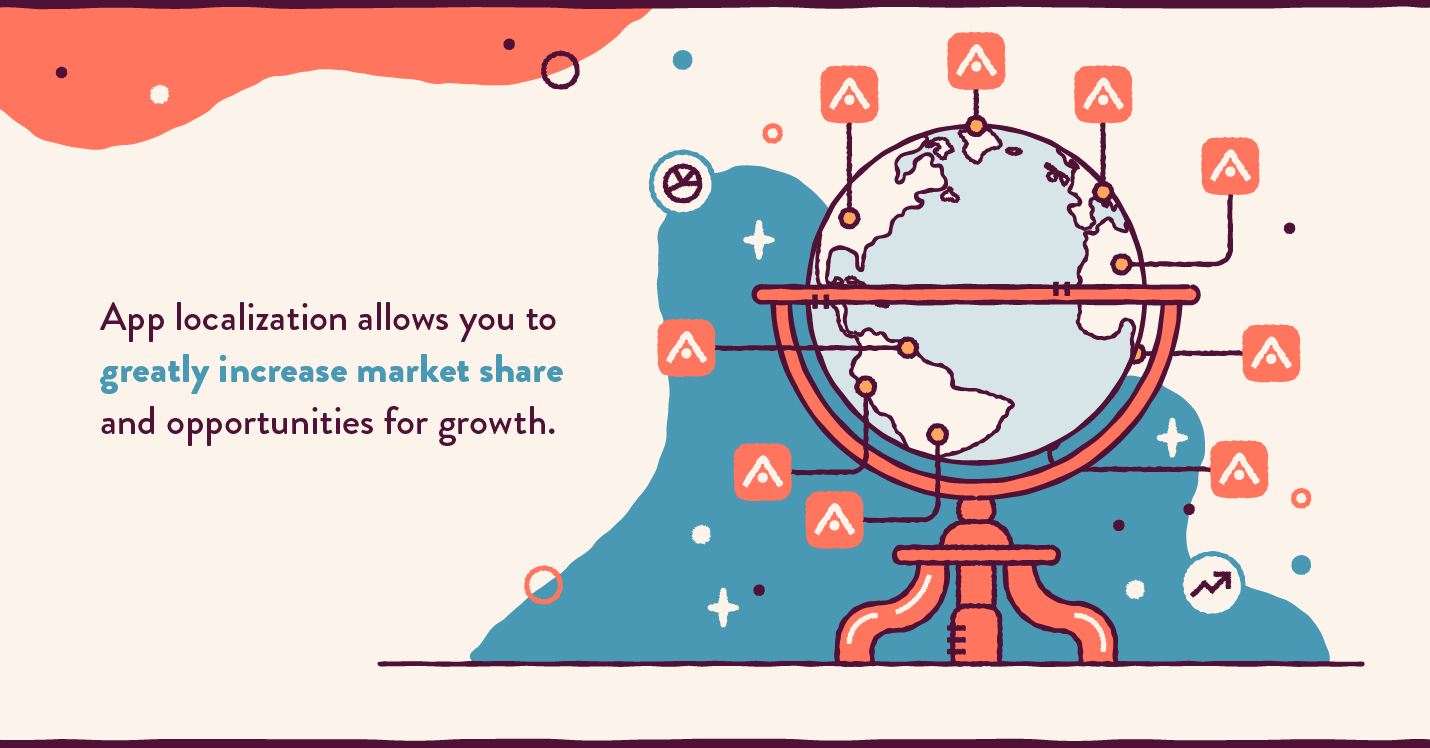 As mentioned above, the correct translation of the app’s narrative is the most important step in the localization process. You don’t want users in another country laughing at a “LIKE LIKE LIKE” button instead of a “download” button.

Successful app localization entails changing a number of aspects of the app, including:

In addition, other cultural preferences should be taken into consideration. Icons and images that are perfectly acceptable in the U.S. could be offensive or distasteful to users in other areas of the world.

App localization also opens up additional language options for app store optimization. You will need to conduct keyword research in the new language and come up with optimized titles and descriptions in order to entice users in that location.

Again, this is not always as simple as popping your English description into Google Translate. For example, the program often comes up with the formal word or phrase, such as “automobile” in English, whereas the more common phrase and keyword would actually be “car.” 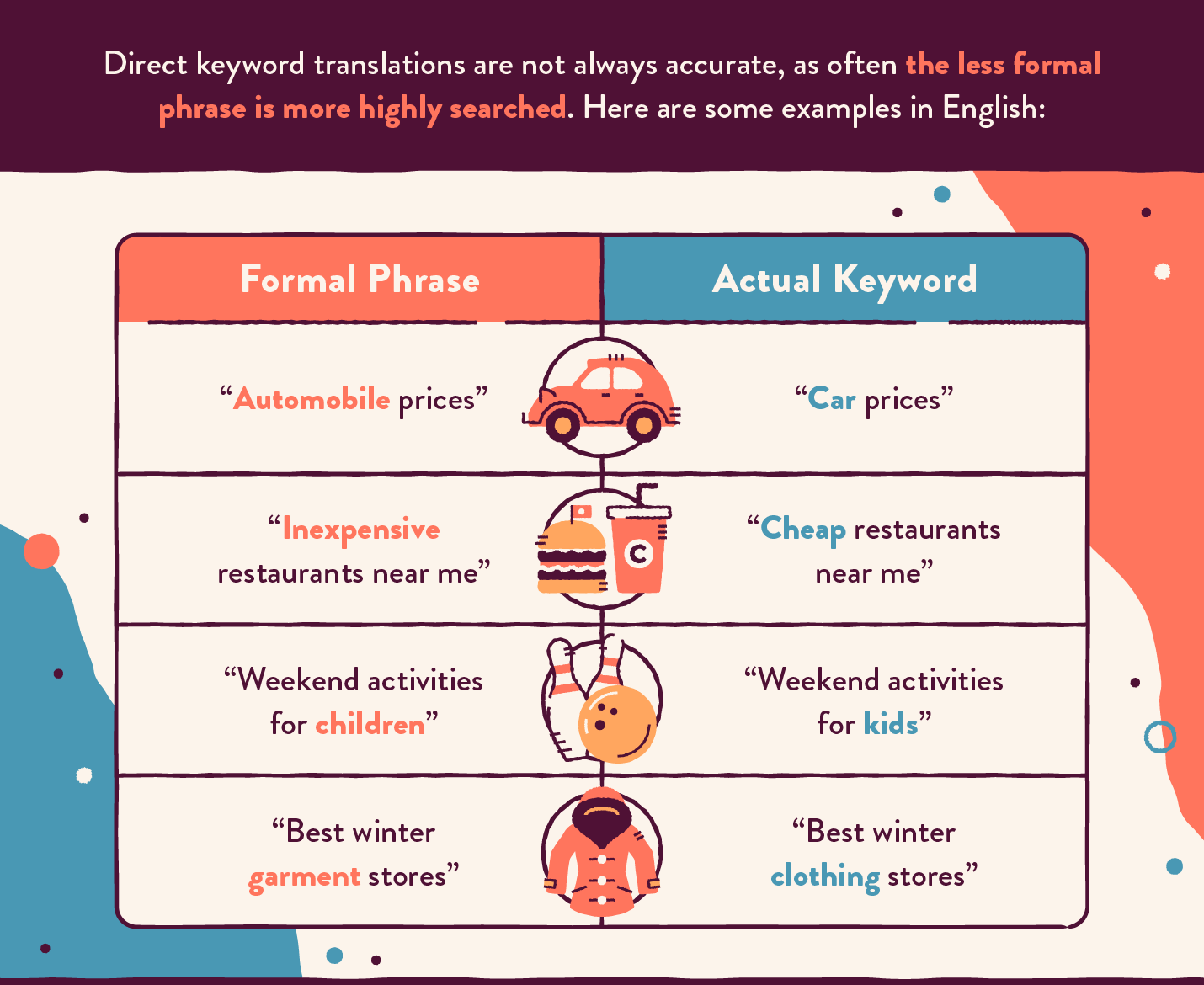 Differences in language and cultural norms can be tricky to navigate. There are countless examples of U.S.-based brands failing to localize properly, often with hilarious results.

One example from a couple of years ago came from the Pepsi slogan, “Come alive with Pepsi Generation.” When marketing the product in China, the new slogan was directly translated to “Pepsi brings your ancestors back from the grave.” Many Chinese soda drinkers got a kick out of that one!01

Localization mishaps are not always due to language. Certain symbols and even hand gestures can be considered rude or downright offensive, depending on where you are. For example, the “rock on” hand gesture in the U.S. is actually used to mock husbands of unfaithful wives in Italy, Spain, Greece, Brazil, Argentina, and Colombia. Not an image you want to pop up on your app screen in those countries!02

Make sure you do your research beforehand to avoid mishaps like this. While sometimes they end up making consumers laugh, it’s not a risk worth taking. 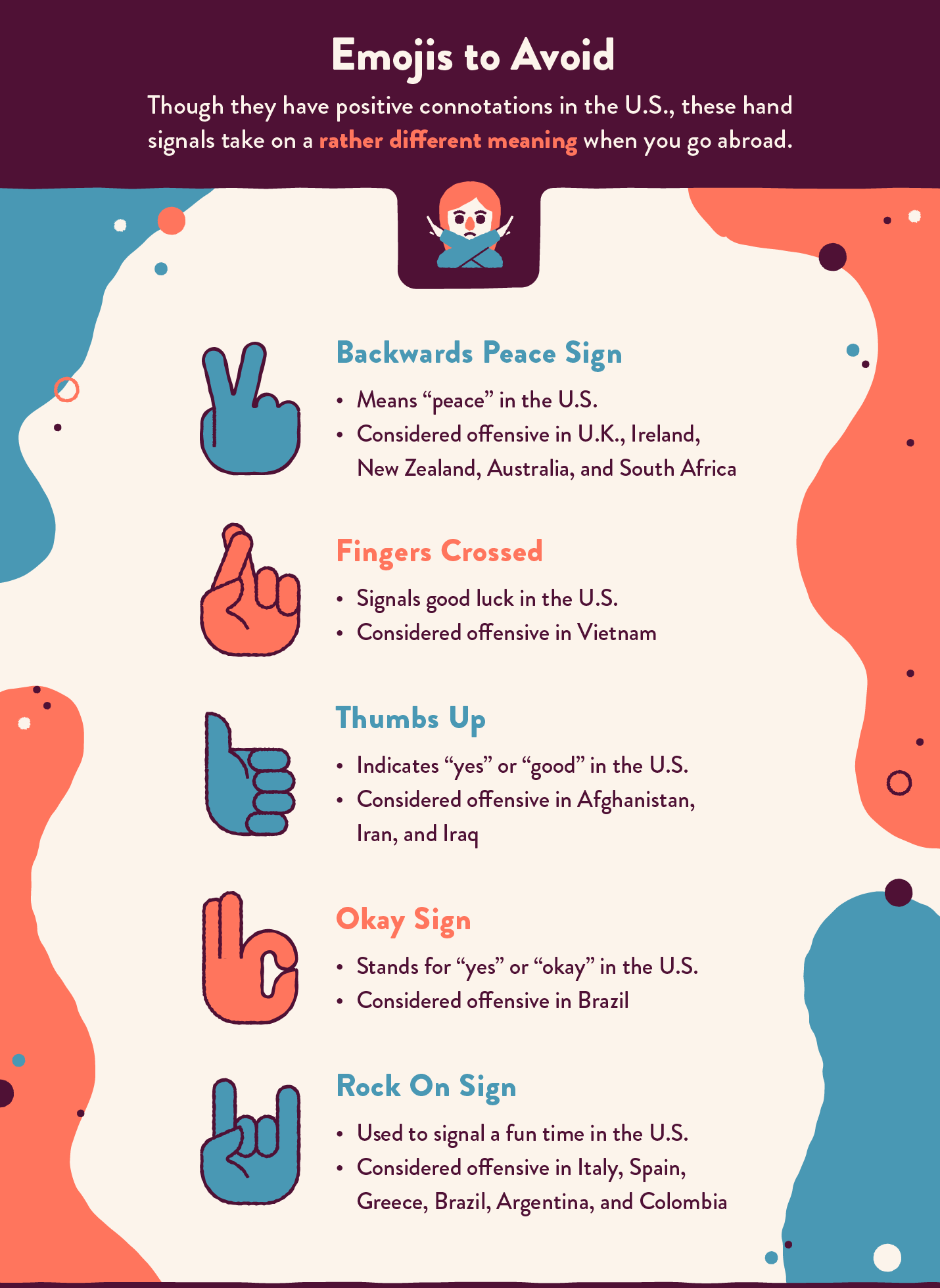 The best way to make sure that your app is ready to launch in a new location is to get people from that country involved in your project. Ideally, these people are bilingual and can aid in translation along with identifying any culturally inappropriate images.

There are actually many companies that specialize in both app translation and localization testing, so partnering with these types of organizations could be a better choice than hiring individuals depending on the scope of your project.

This allowed them to gain in-depth insights into what Japanese users valued in their English-based product, and to successfully localize the Japanese version of the app before launching.

Though the two terms are often used synonymously, there is actually a difference between app internationalization and localization.

Internationalization refers to the technical structure of the app and whether it could actually translate to different languages and be used in other countries. It is ideally taken into account when the app is first created, as it can be difficult to change post-launch.

Internationalization typically involves designing and developing the app to support non-Latin alphabets and bidirectional text (for example, switching from English to Japanese).

Alphabetic characters in different languages can exceed the width limits of Unicode standards. You may have encountered this error before: when emojis don’t fit in the Unicode character limits, they break.

Internationalization also enables code that can pull data for locational preferences like dates and time zones.

Just because an app is internationalized does not mean that it is necessarily localized. Localizing an app is about refining the details (such as language, date and time, currency, and other factors discussed above) while internationalizing an app gives it the necessary framework to later localize, should the opportunity present itself. 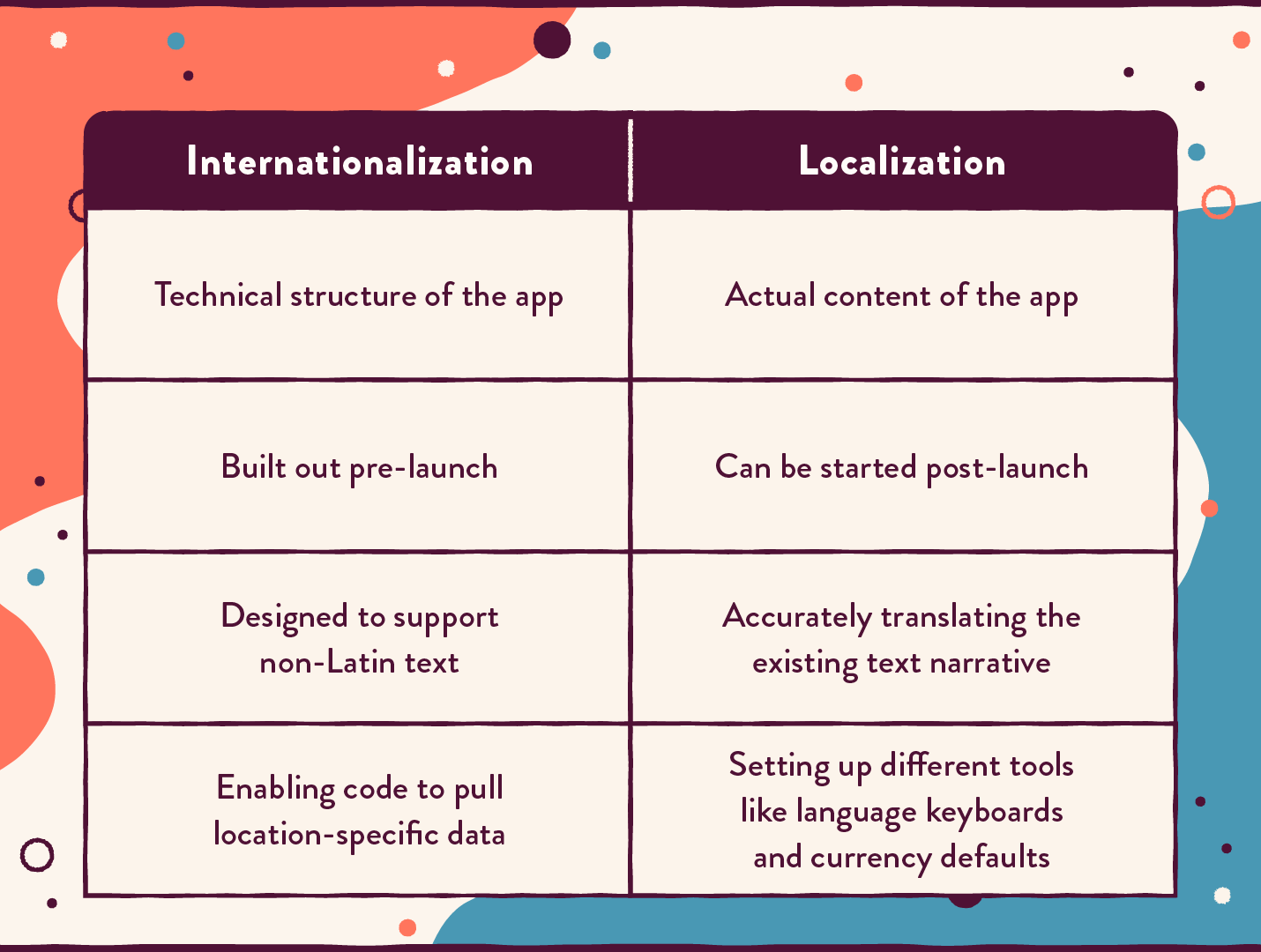 Evernote’s expansion into Japan can also serve as a great example for determining which new markets you should consider localizing. If you see high download numbers of your English language app in non-English-speaking countries, that’s a really good indicator that a localized version of the app would be even more successful.

Keep an Ear to the Ground

Keeping an ear to the ground is a good strategy for identifying potential new markets. Regularly patrol online forums and tech recommendation sites to see if your product is being discussed by users from other countries.

You should also think about where your app has the potential to be popularized based on local interests. For example, if you’ve made an app dedicated to news about soccer, there’s a good chance it would be of interest to users in countries where soccer is a cultural foundation, such as Brazil or Argentina.

Once you’ve decided on the market, it’s important to implement the testing strategies outlined above to make sure your app is localized successfully. Get people involved who know the language and the culture, and contact fans or users in your new market to see what would be most important to them.

Now that we’ve defined app localization and its benefits for mobile marketing, take a look at the graphic below for a summary of implementation best practices. And remember, these localization strategies can be achieved by incorporating CleverTap’s mobile marketing platform into your app strategy. Learn more about what CleverTap could do for you by scheduling a demo.