How to Strike a Balance Between Acquisition and Monetization

In part three of our Reimagine Growth masterclass series, John Spottiswood, COO at Jerry.ai and our very own CleverTap expert McKenzie Davis, talked about mobile app marketing strategies that strike a fine balance between acquisition and monetization.

Below we present some highlights of their conversation as they showcased some hard won lessons from mobile brands that Spottiswood has led such as Match.com, Earnin, and of course Jerry.ai.

Acquisition Vs. Monetization: Lessons from 3 Apps

There’s a key decision that every business has to make: deciding how to balance the importance of monetization versus acquisition. In general, the earlier and more aggressively that you try to monetize your business, the fewer users that you are going to acquire. So you have to find a way to balance that or you ultimately run out of cash. But at the same time, if you can’t acquire enough customers, that’s going to be a challenge for your growth.

So how did these companies solve that problem? Let’s dive into their strategies. 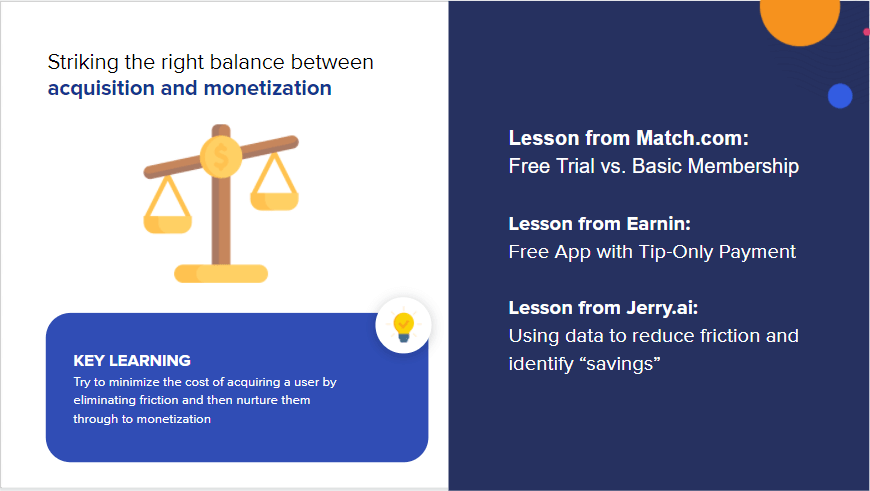 When Spottiswood joined Match.com in 1997, the service had gone from being entirely free to rolling out a monthly subscription product. And all users who had joined prior to that date were grandfathered into the new plan while new users were asked to pay.

The company gave new users a 7-day free trial in which you could basically do everything you wanted to as if you were a paying member. But after that, you got a seven day teaser period where you could search and look at people, you could even receive messages from them or send your own messages. But you could not respond. At the end of that teaser period if you still didn’t subscribe, your profile was taken down from the site.

Spottiswood shares: “After launching this subscription, our user growth slowed really dramatically. We were still pretty strong in markets like San Francisco, New York, and LA, where we had a very large group of grandfathered users. And in those markets more than 35% of our free trials converted into memberships.

“But in newer markets like Atlanta, Dallas, and Phoenix we kind of had a tragedy unfolding. There, our grandfathered users were just 1,000 to 2,000 customers. And we were adding more free trials to that every month, but fewer than 5% of those customers were converting. Our conversion rate varied from a couple of percent up to 35-40% — a huge variance based on the market. And essentially the customers we were adding were not even matching our attrition.”

At the time, a new user in Atlanta could search for people within set criteria and perhaps only come up with 10 profiles. But since it was still their free trial period, that new user could easily reach out to and meet those 10 people —leaving them no reason to ultimately join as a paid member!

“The solution that we developed to solve this problem was essentially a free basic membership… so we didn’t offer it up front. We still took new users through the free trial, and then the teaser period, and we still got our 5-35% conversion rate on those users, just as before. But after the teaser period, instead of just removing their profile from our database we gave them an opportunity to opt out of a basic membership that had a few key restrictions:

“Most of the users ended up taking that basic membership, and so essentially in these smaller markets, we went from having 3-5% of the profile staying live to having 100% staying live and we ended up going back to all of our existing customers who had signed up over the prior few months since we introduced the paywall and offered them the basic membership as well. It led to about a 10X increase in profile content in almost every market.”

Spottiswood says: “For us, the magic equation was: not leading with the free membership and encouraging people to pay, but then ultimately offering that free membership to those users who didn’t see enough value to pay.”

Essentially what Earnin does is it gives employees cash advances against their earnings. But instead of charging for the service as other payday loan providers do, you pay Earnin for its service by giving it a tip, which can range anywhere from $0 to $14. The company decided on this unique approach — and a lot of people thought it was crazy at the time — because it had three elements going for it:

Figuring out a way to make things free but still monetizable is a truly valuable strategy. If you can make it happen for your own mobile app, do so!

Spottiswood shares: “In the end this combination of having a free app and being able to make pretty good monetization similar to what we might have been able to get by charging people, improved both acquisition and virality. It helped Earnin to grow very fast compared to the competition. Ultimately, we raised more than $190 million and became the clear leader in the cash advance industry.”

Jerry.ai is an online insurance provider. But how does a service provider like that differentiate itself from the competition? Spottiswood tells us: “Of course people buy insurance through us, but our focus is on how we’re saving them money, not what they’re spending.”

The secret to their success involves two steps:

They Make Signup Frictionless
By making the process of signing up really, really simple, the company makes it easier for customers to get what they need immediately. Instant gratification.

They leverage over 60 data providers so a customer needs only to provide a name and mobile number. From there, the company is able to pull: the customer’s identity, automobiles, drivers, their home or apartment info, current coverage details for their current insurance, and more. The process saves the customer from having to input over 20 pages of data required by other competitors.

They Talk Savings
Secondly, at the end of the signup process, customers are asked how much they’re currently paying for their insurance. This is the one detail that the company cannot get from their data providers.

Spottiswood adds: “From that, we’re able to quantify the monthly savings they can obtain by switching with our various carriers. This turns the conversation from buying into saving. And while not everybody wants to buy from you, everybody likes to save.

“This combination of making signup really simple and turning the conversation toward savings has enabled us to improve our conversion rates, such that over 27% of the users who click on a Jerry ad end up signing up. Which is an incredibly high click-to-conversion rate and then over 10% of those — because of the saving message — end up switching with Jerry.”

Acquisition and monetization can happen simultaneously — but only if the focus is clearly on the benefits to the customer:

By making signup easy, they were able to streamline their acquisition process, removing possible hesitation to sign up.

By moving conversations toward money being saved, they were able to minimize roadblocks to actually purchasing the insurance.