How to Identify and Mitigate Risk in A/B Testing

Why do we need experiments?

Experiments play an important role to test theories and provide the basis for scientific knowledge. Similarly, experiments are an important tool for product and marketing analytics. Product experts and growth marketers are looking for ways to increase conversions and engagement, reduce churn, and so on. An essential tool with the experimentation framework are A/B tests.

What are A/B tests?

A/B tests are extremely powerful and useful tools to test content. A/B testing is a method of comparing two versions of a web page or app to determine which one performs better. You can extend it to multivariate testing, where more than two variants can be compared.

How does one design a good A/B test?

In order to conduct a proper A/B, you need to:

Let’s say you are tasked with improving the conversions on your landing page that currently stands at a 2% conversion rate. You have another variation of the landing page in production that you would like to compare to the live one.

Let’s understand some basics of statistics to achieve our goal.

While comparing both variants, you wouldn’t want a scenario where a variant showed a 20% lift in conversions during the experiment. However, the same variant delivered lower than or no lift compared to the default version in production most of the time. In other words, the outperformance during experiment could be by chance or random.

Here’s how you minimize this risk:

We have some preconceptions about the expected lift, beyond which we will accept the challenger. For a 2% default rate and a lift of 20%, the minimum detectable effect is 0.4%.

It is a common practice to set the Type I risk to 5%. It means that in 5% of the times, we will incorrectly say that there is an effect although it was most likely random chance. 95% of the time, we correctly assume the observed effect was just noise and there isn’t an actual effect.

But what about Type II error?

In our example, say we observed either of the following:

Because we needed a lift of at least 20%, we should retain the default version.

What is the risk of retaining the default version? The conversion rate of the challenger version may actually be higher and the lower conversion rate was due to chance. Type II error helps us quantify that.

Should we reject the incumbent and choose the challenger? What are the risks associated with it? We know that we had assumed the Type I risk at 5%. 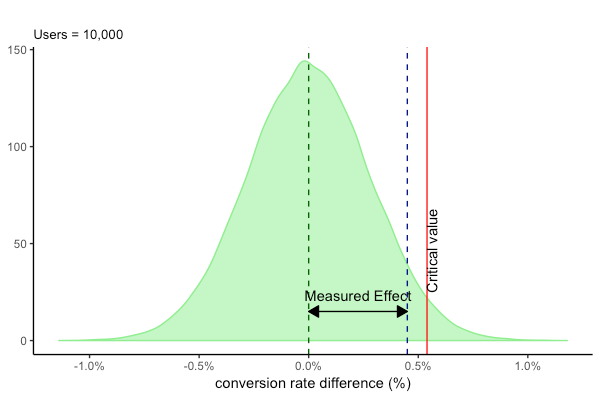 From the figure above, we can infer that for a 5% Type I error, the lift generated isn’t above the critical value.

Is the above analysis enough to reject the challenger variant? What if the observation is random and in reality, challenger conversion rates are beyond 2.54%. For that, we need to look at the distribution of the lift (detectable effects) created by the challenger. 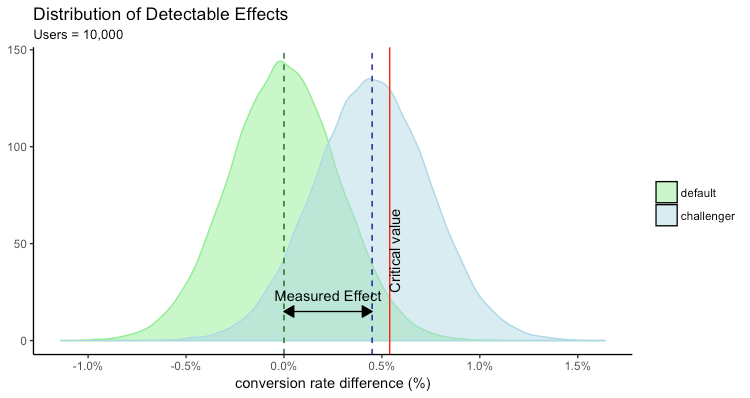 From the above figure, it’s clear that less than half of the possible detectable effects are larger than the critical value (0.54%) shown by the region to the right of the red vertical line. The region to the left is the Type II error, which is larger than 50%. Not a desirable scenario indeed!

How do we reduce the type error in the above scenario? We observe the impact of running the test on higher number of users on the Type II error. 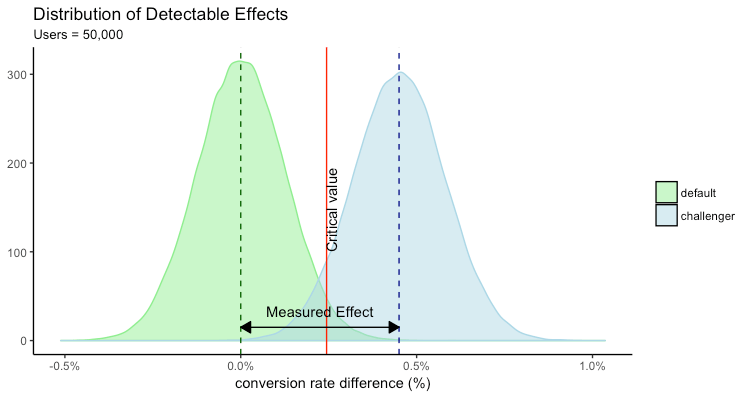 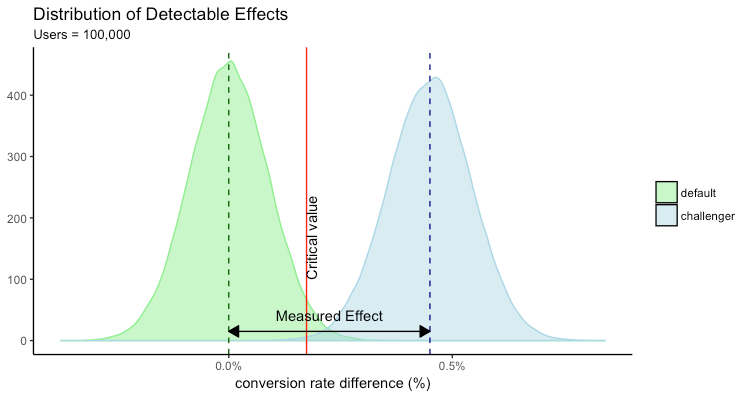 The increase in the sample size had a positive effect on both the Type I and Type II error. Now it is much easier to make conclusion on the tests.

From the statistical concepts discussed above, we know that sample sizes play an important role in determining the strength of such tests. Below is the table of sample sizes at various levels of conversion rates at 5% Type I risk, 20% Type II risk, and minimal detectable difference of 10%

We seem to have all the statistical tools to help us create statistically sound A/B tests. However, A/B tests suffer from 3 major problems in practice:

What is the solution?

To be agile, one has to find a balance between accuracy and speed. In the next post, we will talk about two techniques which give you the flexibility to conclude your tests faster and for lower sample size: