How Stardust Rethinks Segmentation and Messaging to Delight Users

While Game of Thrones was at the peak of its popularity, an ardent fan of the show named Derek Forbes wanted to connect with fellow fans to talk fan theories, predictions, and major episode events. Existing forums were too generic, without the sense of community Forbes wanted. There also wasn’t a way to subscribe and follow specific movies and shows or a place to read and share comments on a per-episode or per-season basis.

Forbes wondered, “If there was only a social app for all my favorite shows and movies.”

He created Stardust in 2017 to be a space for fans to connect over the shows and movies they’re passionate about. Users can create watchlists, record 30-second video reactions, conduct polls, read articles, and create communities for their favorite movies and shows.

To learn more about how they’re connecting audiences, we spoke to Ashley Fauset, Chief Operating Officer at Stardust.

When Fauset joined, their existing push notification stack didn’t help them understand who was opening their messages or how campaigns were performing. It became increasingly challenging for their marketing team to gauge the effectiveness of their messaging, which led them to integrate with CleverTap.

As an app driven by social interactions between users, Stardust needed a steady balance of content creators and consumers in order to provide an engaging experience. When they dug into their data, they discovered that just 20% of users were creating content that was being consumed by 80% of users on the platform. Having a steady stream of user-generated content was important for ongoing engagement. To inspire more user-generated content, Fauset’s goal was to broaden conversations, build tight-knit user groups, and increase the number of interactions users had on the platform.

User engagement is built into Stardust’s onboarding process where users select 5 of their favorite movies or shows. By the time a user onboards, Stardust has enough data points to curate their home feed with relevant articles, polls, video reactions, or suggestions. This creates a personalized experience from the very first launch. These first impressions demonstrate to first-time users that the platform has interesting curated content and a community of users who share similar interests. 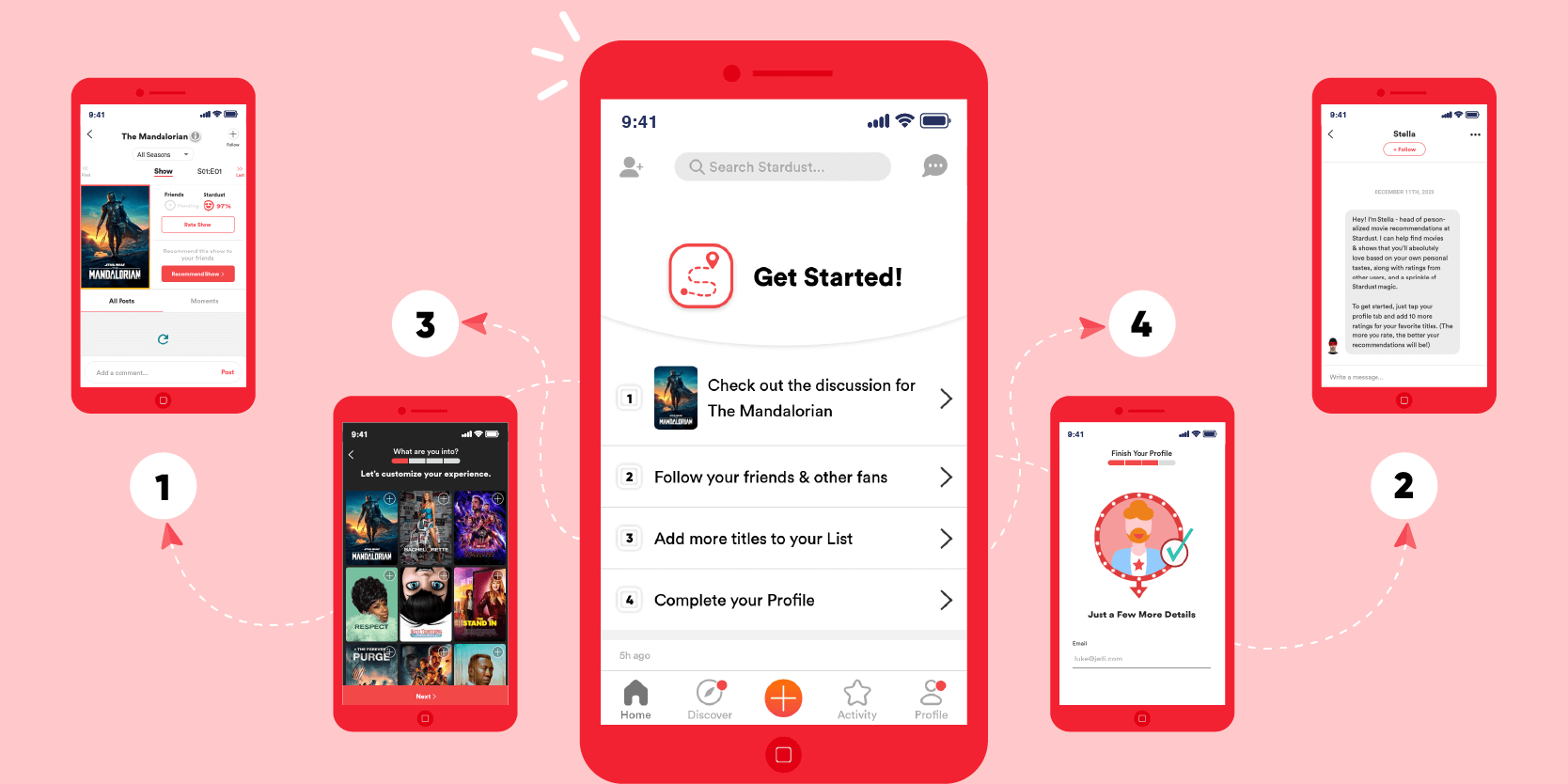 The segments are created based on five criteria:

1. Media and movie franchises
Some audiences are dedicated fans of media networks like Disney, Marvel Studios, or DC Entertainment. Then, there are fans of movie franchises such as Star Wars, James Bond, The Marvel Cinematic Universe, the DC Extended Universe, or Mission: Impossible. And then, there are fans of niche shows like The Marvellous Mrs. Maisel or cult favorites.

3. In-app content
Aside from user interests, Stardust creates segments based on how users engage with the platform. Are they reading articles, rating movies, or leaving video reactions? These user events then tie back to their media preferences, so that segments are both behavioral and interest-based.

4. In-app behavior
By segmenting users based on their in-app behavior, Stardust can connect users based on similar interests and activities. For example, users who are a part of the in-app Cinema Club are encouraged to watch a “Movie of the Day” via push notification.

5. Real-time actions
By dynamically segmenting users based on factors like adding a title to their watchlist or their content ratings, Stardust further enhances what they already know about the user. Journeys are used to send real-time notifications based on the latest user information. 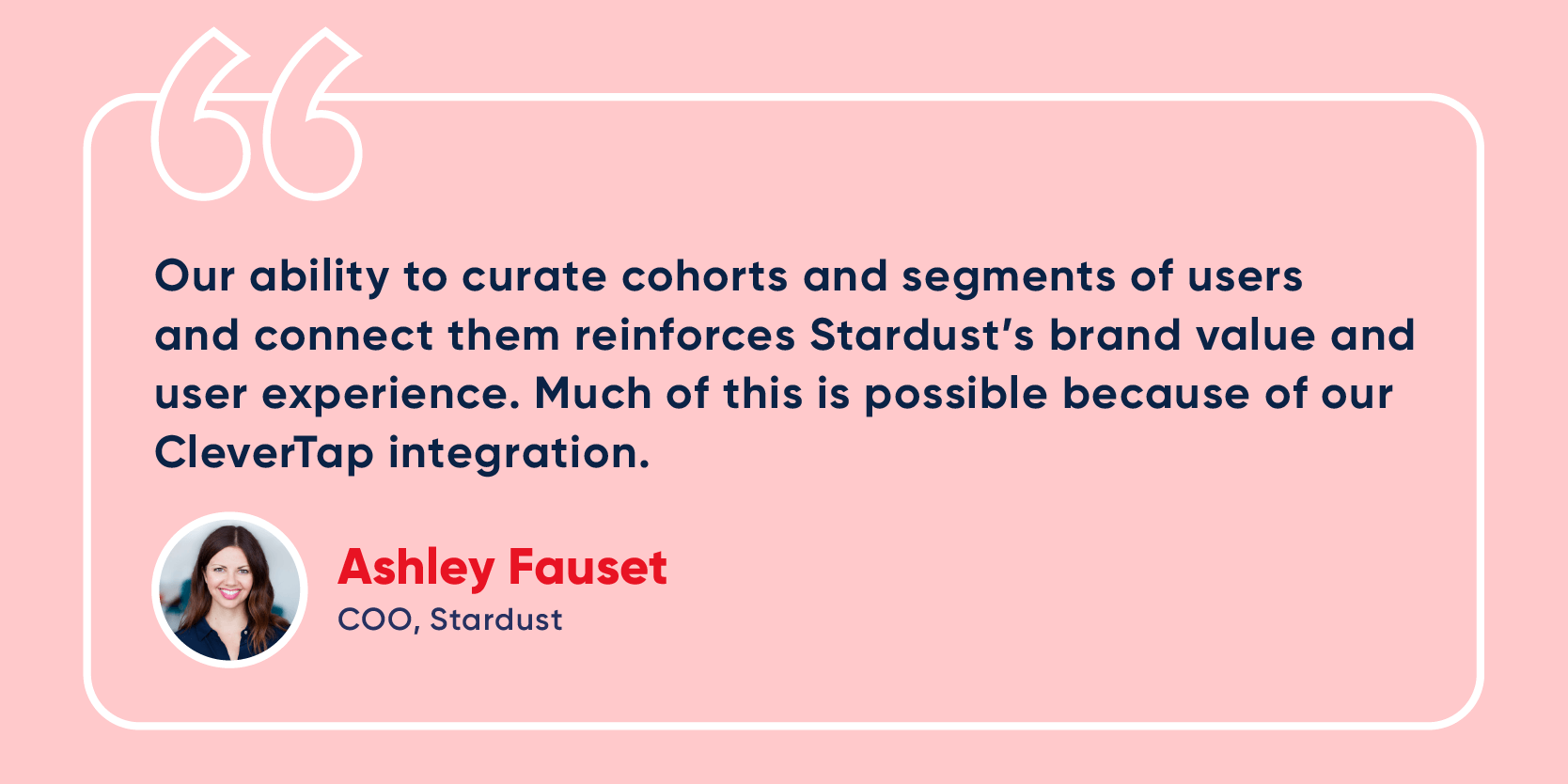 Initially, Stardust messaged users based on their watchlist titles. But when Fauset looked into the number of users eligible for the campaign, it seemed far too low. She checked the number of users who rated, reacted, created a poll, or read an article about the movie, and instantly saw the audience broaden to include this additional behavioral criteria. As a result, Stardust saw a 37.6% uplift in MAUs month-over-month.

An area where CleverTap has made a huge impact on Stardust is in managing its editorial programs. They publish 10-15 entertainment news articles every day, and they whittle down segments to identify super-specific user interests.

For example, it’s not enough to simply identify a user as a Star Wars fan: some are only interested in the original trilogy, some love the prequels, others are avid followers of series like The Mandalorian or Clone Wars. By creating these micro-segments, Stardust can laser-focus their messaging so that users only get updates that are valuable to them.

Stardust’s approach to segmentation is to create highly targeted cohorts based on the user’s values and interactions on the platform. By empowering their community to tell them what matters to them, they build loyalty by keeping users in control of their activities and experiences.

As a social app, engagement and repeat behavior is paramount to Stardust’s success. Session duration is their main KPI. Conversion events include adding movies to a watchlist, rating a movie, or posting a video reaction.

By tracking custom events, Stardust can grasp information like app launches or user interests that help amp up the user experience. Before launching a new feature, the team at Stardust thinks about how users will engage with it and the messaging they want to send. For every event sent to CleverTap, they consider what event properties will be useful for them and the dynamic values they want to include in the messaging so that it’s relevant on an individual basis.

Push notifications are a critical messaging channel for Stardust. They use targeted and triggered campaigns for everything from onboarding to engagement to win-back campaigns. Every day, 10-20 notifications are sent to users based on entertainment news, articles, or the Cinema Club. The ability to use dynamic values helps them send a personalized message to every user with the same push campaign. 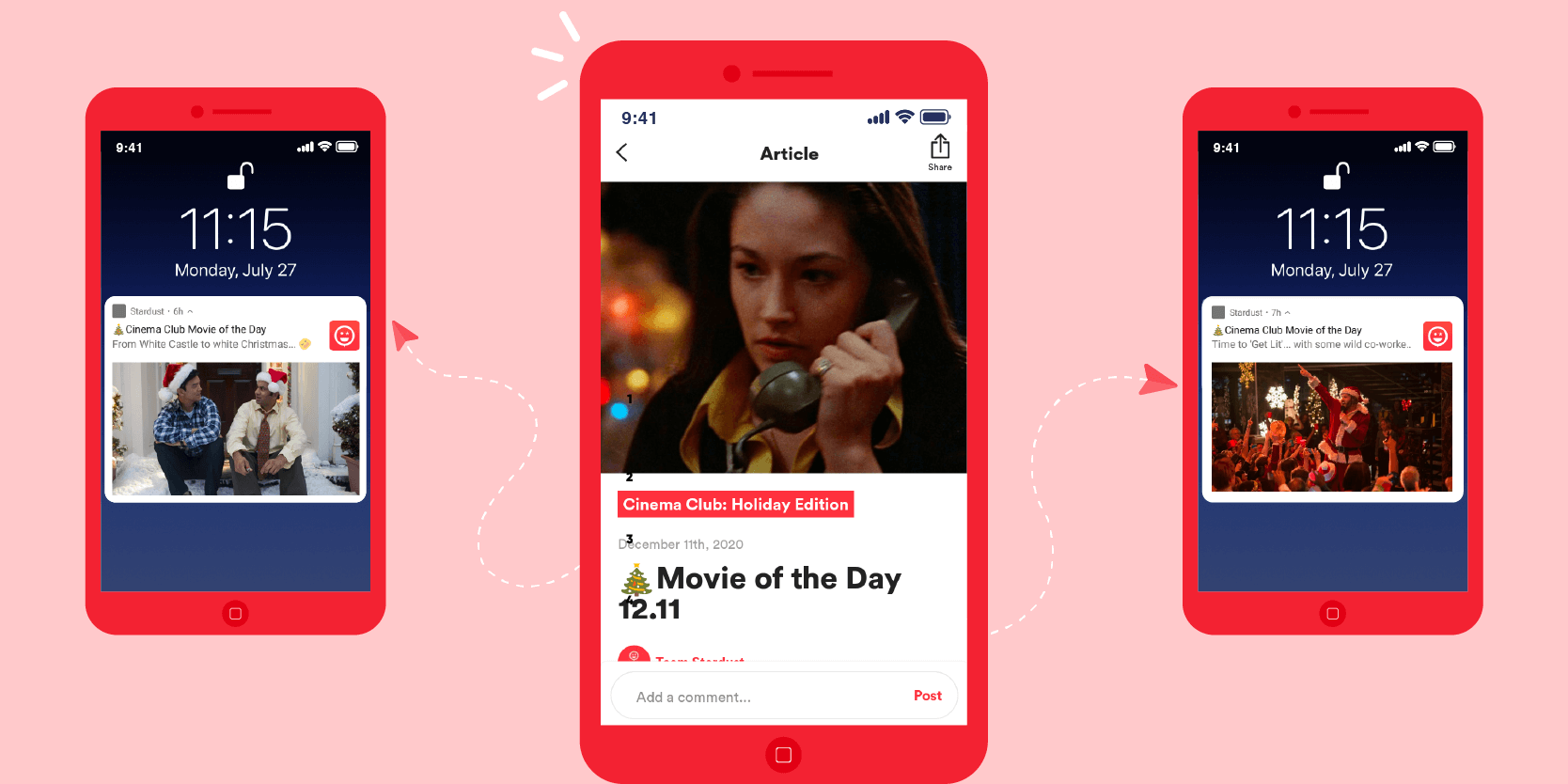 With an abundance of content online, many users experience scrolling fatigue. What sets Stardust apart from other social entertainment platforms is its AI/ ML-based recommendation system, which generates individualized recommendations based on movies and shows users have top-rated.

A list of five content recommendations are created every Monday and sent to users via a push notification that is deep linked to the user’s recommendation page. Click-through-rates for this campaign are at 7%.

Closed action push enablement has also been instrumental in increasing engagement and retention on the platform. 80% of iOS users are currently opting in to their push notifications.

To ensure that users complete onboarding within a certain time frame, they set up a Journey of three push notifications. After implementing this campaign, they saw a 44.6% month-on-month increase in users who completed onboarding.

They have 30 different Journeys running at all times related to when users interact with each other. For instance, if user A reacts to a movie and user B drops a comment, then A receives a notification.

This user-to-user triggered event increases engagement on the platform, and the CTRs for these journeys vary from 55-99%. User-triggered journeys also help them reinforce the community aspect of Stardust.

COVID-19 and the Need to Stay Connected

During lockdown, Stardust launched their popular Cinema Club, where they curate and share a movie every day, challenging users to watch and react to that movie. They’ve seen a big wave of users flocking towards this group as users can watch the movie together even when physically isolated, creating a deeper sense of community.

Stardust continues to team up with entertainment influencers to infuse the platform with content and get their fanbase to join the app.