60 Most Popular Apps on the App Store and Google Play

Back in 2009, when Apple launched the iPhone 3G and used the tagline “There’s an app for that,” little did they know just how big app marketplaces would grow.

There’s not just one app for “that,” there are now literally hundreds of choices for any use case you can dream of.

Why Are There So Many Apps?

Quick answer: because we have so many needs and many of them can be solved with an app.

A year ago, we analyzed over 250 apps with an average of 30,000 DAUs each to see how COVID-19 was affecting app usage and mobile habits. And the results were staggering:

Some app industries (like streaming media, ecommerce, and fintech) saw a surge in user engagement — often as high as a 177% average increase in daily active users (DAUs).

The world suddenly had very specific needs and turned to apps to scratch that itch.

Below, we feature the top 10 most popular apps in the free, paid, and highest-grossing categories — in both the App Store as well as Google Play.

Most Popular Apps on the App Store 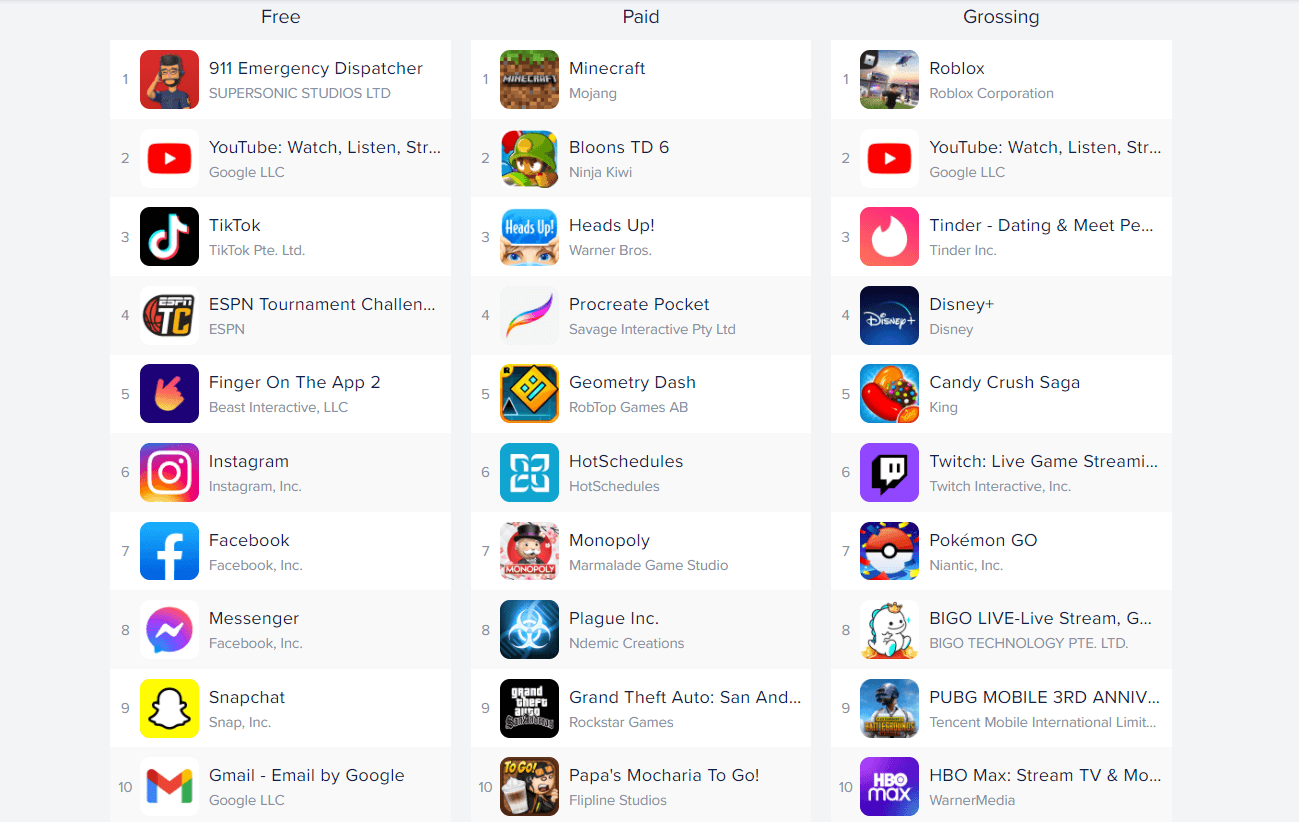 1) 911 Emergency Dispatcher
No surprise that a game makes the top spot in the free tier. What is a surprise is that you simulate a series of decisions that a real-life 911 dispatcher might have to deal with. Although, granted someone calling 911 to order a burger would probably receive a sterner warning than “LOL Goodbye.”

2) YouTube
Videos. All day. All the time. For when your attention span is not long enough for Netflix. Or when you need to fix something in the house that you really should hire a professional for.

3) TikTok
For when your attention span is not even long enough for YouTube. Or when you intend to finally give in and attempt the latest kpop dance.

4) ESPN Tournament Challenge
With any sports season, you’ll need a bracket app to organize your picks and compete against friends, even ESPN personalities and celebrities, to see who finishes with the best bracket.

5) Finger on the App 2
Coming from the mind of pro gamer Mr. Beast, this game is simple: compete with other players online to keep your finger on the app for as long as possible. The final winner gets $100,000. Watch out for the hackers and bots, though!

6) Instagram
Photos! With filters! And comments from your social network. Mostly just hearts.

7) Facebook
Social networking for parents and developing nations! And reactions from your well-meaning circle, though mostly just thumbs-ups.

9) Snapchat
The originator of self-destructing content remains a favorite.

10) Gmail
And of course, Google’s own email app rounds off the top 10 free apps in the App Store.

1) Minecraft
The appeal of building worlds made out of blocks and adventuring in those worlds with your remote friends appears to be evergreen. Also, the devs keep adding new and interesting content to keep the game fresh.

2) Bloons TD 6
A cute tower defense game that involves talented monkeys defending the path from invading balloons. As expected, highly addictive. Unlike similar casual games though, this one charges you even before you install.

3) Heads Up!
It’s a charades game using your phone. You position the phone above your head to show your teammate the clue that they now have to get you to guess. Instant small group fun.

4) Procreate Pocket
Digital painting and illustration on your iOS device. Really simple to use and provides a truly vital component for any digital art: the ability to use layers.

5) Geometry Dash
A musical side-scrolling flight adventure where you travel a geometric landscape, avoid geometric obstacles. Because it’s paid, there are no ads. Awesome music too.

6) HotSchedules
This is the only entry that isn’t a game. Instead, it’s a timecard and calendar app used for scheduling your shifts, inputting time and attendance, and even making sure your company abides with compliance.

7) Monopoly
Just like the board game, but on a digital device. And without all that fake paper money flying about. Though, truth be told, that’s the fun of the board game, right?

8) Plague Inc.
A strategy and simulation game about trying to successfully infect the world. Umm… isn’t that a tad too close to reality? Apparently, not for gamers.

9) Grand Theft Auto: San Andreas
But if you need the ultimate escapist game with a healthy side of violence, then GTA lets you engage in gunfights, commandeer all sorts of wheeled vehicles, and live life as a gangsta.

10) Papa’s Mocharia To Go!
It’s a time management restaurant preparation game. Prepare the drinks quickly! Please your customers! And don’t forget to tamp down the coffee grounds before pouring the milk.

1) Roblox
More blocky multiplayer fun with friends. But why is it consistently a high grosser? Because it’s not a single game. Roblox is a gaming platform for its community to develop or buy new games (or game items) built with the main engine.

2) YouTube
Isn’t YouTube all about the free videos? Oh, they haven’t been for a while. Users can now buy or rent movies, subscribe to specific streams like online gaming or sporting, or simply cough up the monthly price for an ad-free YouTube premium subscription.

3) Tinder
No longer just swipe left or right. Tinder Plus allows users to undo swipes, match with people overseas, get people’s attention via super likes, and deploy monthly “boosts” to increase profile visibility. For a monthly fee, of course.

4) Disney+
Streaming everything from Mickey Mouse to Jabba the Hutt to Baby Groot. And getting us to part money for the chance to watch content only available on their platform.

5) Candy Crush Saga
A tried and true formula: match 3 of the same type and if you run out of all your 5 lives, pay for more with in-app purchases. In 2020 alone, Candy Crush Saga brought in more than $720 million.* Now that’s a lot of extra lives.

6) Twitch
Aside from ads, this video streaming app makes money through its two subscription models, the Amazon-affiliated Twitch Prime, as well as Twitch Turbo. Because we all need more video!

8) BIGO LIVE
This live streaming platform from Singapore gives users the chance to stream their games live, live chat with people around the globe, or simply be an online social media influencer. With in-app purchases of course.

9) PUBG MOBILE
This battle royale shooter game is still kicking years after its launch thanks to its addictive gameplay and ardent community of fans. How does it earn so much? In-app purchases and ads.

10) HBO Max
Finally, this subscription streaming app features its own unique content alongside movies from Warner Bros., DC, Studio Ghibli, and much more.

Most Popular Apps on Google Play 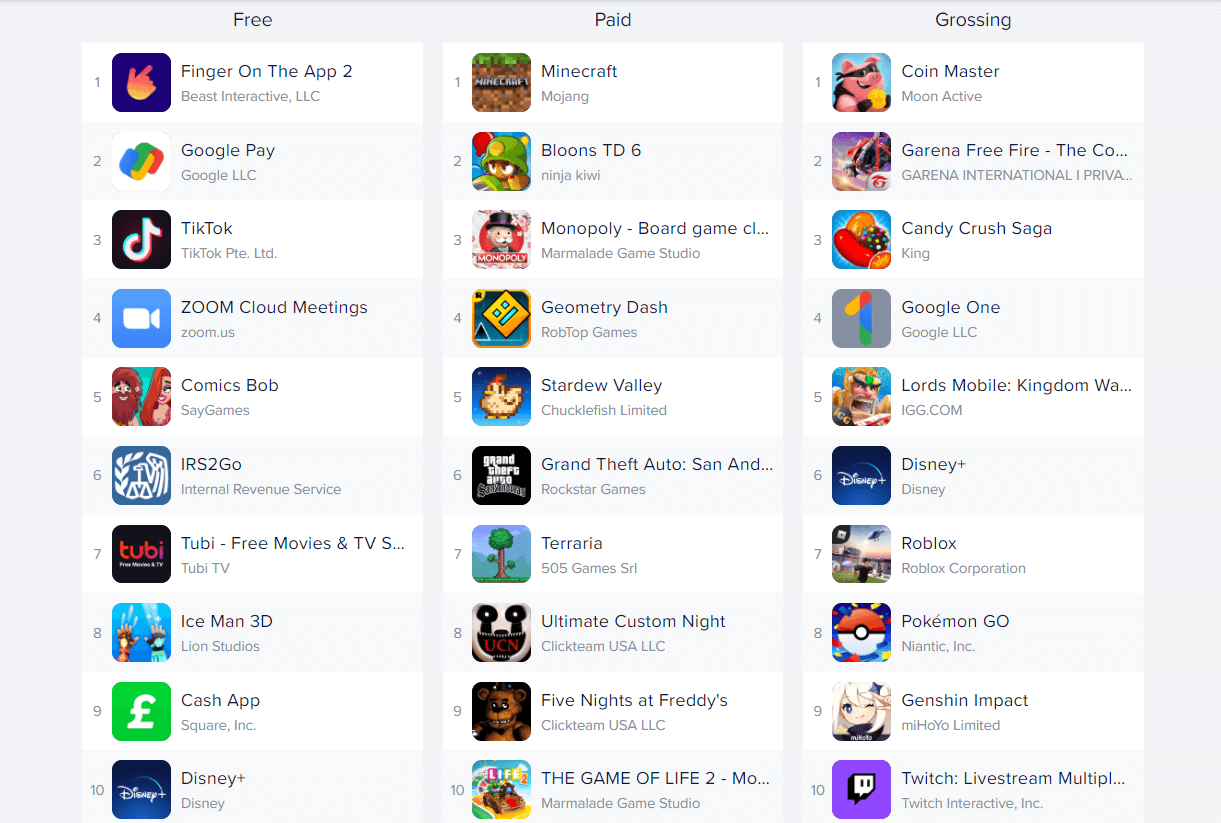 2) Google Pay
Google’s own cashless payments app is hugely popular — particularly in markets where Android is the dominant mobile OS.

4) ZOOM Cloud Meetings
And where would we be without our regular Zoom calls for both work and remote socializing? Having to settle for Google Hangouts perhaps?

5) Comics Bob
You know all those ads you get for puzzle games? Well this is probably the best of the bunch. You’ll have to decide correctly to proceed with the story of Caveman Bob and his girl as they tackle romance, dinosaurs, and mad science.

6) IRS2Go
With the tax deadline looming in North America, it’s no wonder that this is in the top 10 free apps list. With this, a user can check their tax refund status, make a payment, or even find free tax preparation assistance.

7) Tubi
Another video streaming app? Even better, it’s free (ad-supported, naturally). Apart from the usual Hollywood fare (the older movies), this app has a wide selection of international fare: from Korean dramas and Japanese anime to British drama series.

9) Cash App
This is Square Inc.’s mobile banking app. With this, users can send, spend, save, or invest money.

5) Stardew Valley
What can be more relaxing than a farming RPG? Participate in heart events, grow crops, tend animals, and you don’t have to deal with the smells of a real farm.

7) Terraria
Think Minecraft but side-scrolling and using 8-bit characters. This sandbox, world-building multiplayer game is an adventure that up to 8 players can play simultaneously, even via local wifi.

8) Ultimate Custom Night
It’s a spinoff of Five Nights at Freddy’s (see below), but this horror survival game allows you a world of customization that the original games could not give.

10) The Game of Life 2
Based on the original Hasbro board game, this digital update allows you many more modern choices. Become a pop star or a surgeon? Maybe a vlogger? Plus, it’s ad-free since it’s paid.

1) Coin Master
This game is really just a slot machine. Spin to win. But it cleverly adds other dimensions: you collect pets and cards, raid other villages, build up your own village, and explore new worlds. And watch a ton of rewarded video ads in the process.

2) Garena Free Fire
This is a survival battle game like Fortnite or PUBG. And like those competitors, they rake in the cash by offering season passes as well as in-app purchases.

4) Google One
Really simple app for automatically backing up your phone and managing your Google cloud storage. Simply pay for a membership and you’re in.

9) Genshin Impact
Another free-to-play game, but this time an RPG with anime-style graphics. It monetizes through IAPs that give you a chance (not an assurance) to win what you spent real money for (much like the Japanese toy vending machine, called Gacha).

What Do These Popular Apps Have in Common?

What do these 60 apps all have in common? And what brought them to such heights of popularity?

If you take a close look at each of them, you’ll soon realize they each stake a claim on a specific area of our lives by getting us to cultivate a habit. So much so that if you have 10 minutes before a Zoom meeting, the apps you habitually reach for are probably listed above.

You want to be entertained? Go for YouTube or TikTok or Disney+. You want to capture a moment? Instagram or Facebook or Snapchat. You want to talk with a friend? Zoom or Messenger. You have some time to kill? PUBG or Garena Free Fire or Bloons TD 6!

Every one of the above apps is able to engage users and keep them coming back so often that it’s second nature to them. And that’s a great way to build up loyal users.

“Once a habit is formed, the user is no longer considering whether they should open an app — they check the app every day, automatically, without thinking much about it.”

And that’s the secret to their success, which hopefully you get to build into your own apps: these are the apps that users return to every day, whether they’re conscious about it or not.