The Mobile Growth Statistics You Need to Know

Marketers know that smartphones changed the game. It’s been years since mobile overtook desktop usage, and that gap is only getting bigger. Now mobile isn’t just a device — it’s a mentality.

Today’s brands have to understand how to grow a business in the mobile-first era. And that means answering questions such as:

Brush up on the latest statistics and emerging trends in the mobile marketing industry with our collection of mobile growth statistics below. The stats are sorted into categories so you can quickly skim to grab the numbers you want, along with the original source.

• 52% of the time that individuals spend on digital media is on mobile apps. (Business2Community, 2017)

• Smartphones are the only devices that have seen growth in the number of online visits, up 89% since January 2015. Tablets and desktop visits have declined significantly (-30% and -17% respectively) (Adobe, 2018)

• 46% of smartphone owners say their device is something they “couldn’t live without.” (Pew Research, 2017)

• There is more than 4.5x the number of Android users than iOS users worldwide. (Gartner, 2017)

Learn how concerns about app security and private data are affecting user behavior.

• 28% of US smartphone owners say they do not use a lock screen or other feature to secure their phone. (Pew Research, 2017)

• 61% of mobile users say it’s extremely important to them that a company deletes personal data when they ask it to. 70% of these also say they’re concerned personal information will be shared without their permission. (Mobile Ecosystem Forum, 2017)

See how today’s users have incorporated mobile apps into their daily lives. 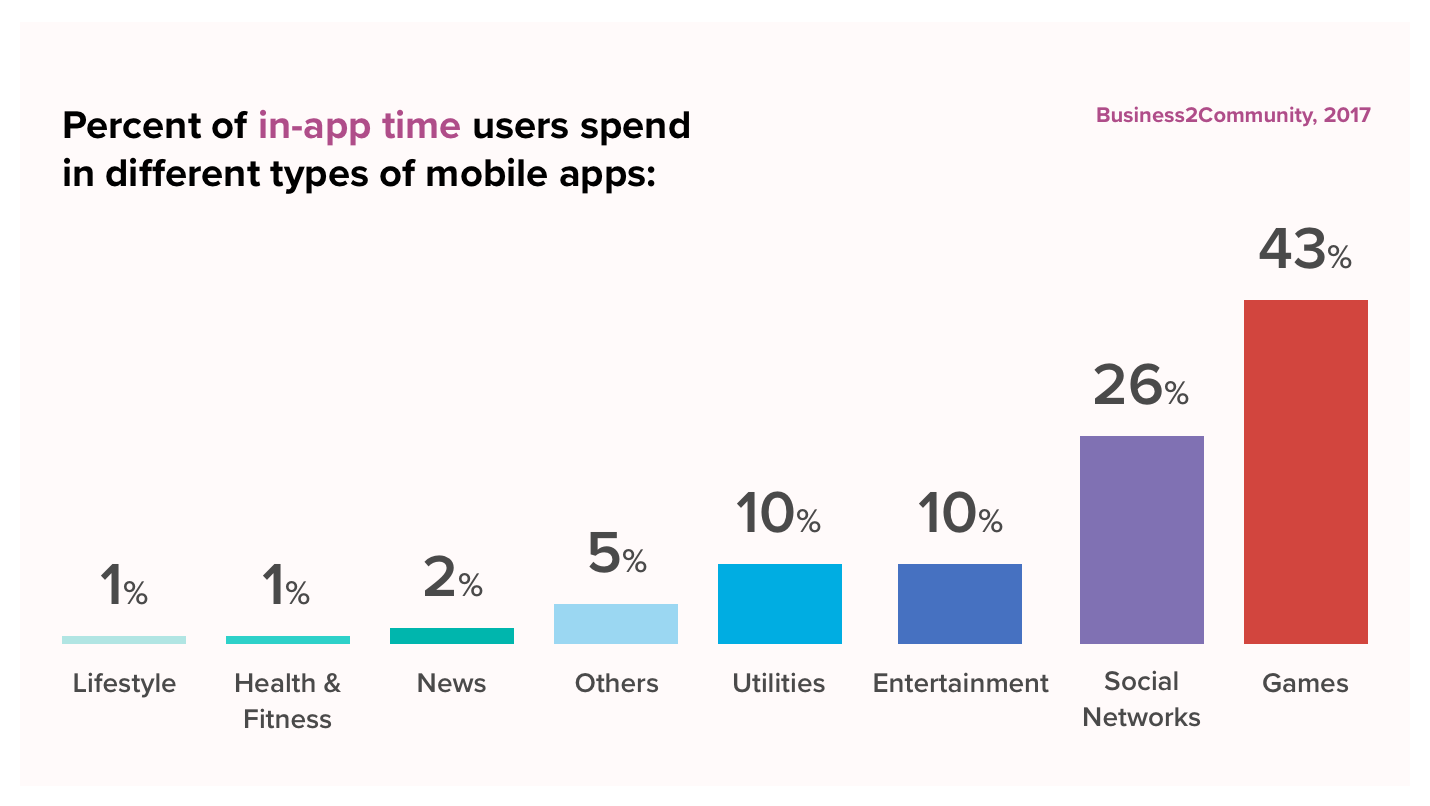 • 60% of app users decide not to download an app after realizing the amount of personal information they would have to share. (Pew Research, 2015)

• Discounts and deals are the top motivating factors when deciding whether to install an app. (Think With Google, 2016)

• In 2017, the top five app activities among US consumers were listening to audio, social media, gaming, video viewing, and messaging. (eMarketer, 2018)

• By 2020, 48.7 million consumers are predicted to opt-in to receive business SMS, making it the fastest-growing marketing channel. (textlocal, 2017)

• Response rates from SMS are 209% higher than from phone calls, Facebook, or email campaigns. 29% of targeted customers respond to text messages and 47% of those responders go on to make a purchase. (Emarsys, 2018) 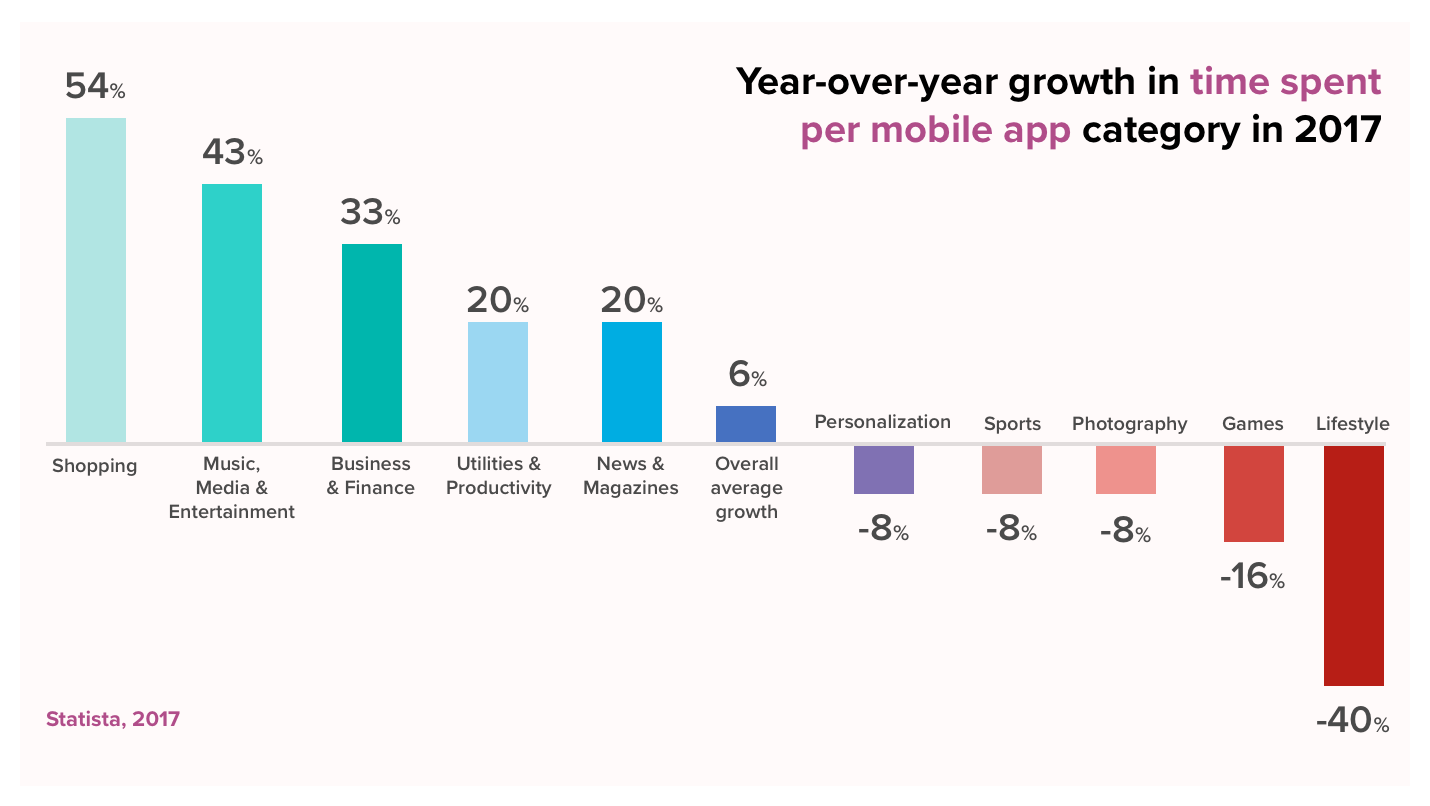 • Taking up too much phone memory is the #1 app-related issue that leads users to uninstall an app. (Think With Google, 2016)

• Discounts, deals, and bonus offers are the top reason someone will return to an app after uninstalling. (Think With Google, 2016)

• Mobile is the dominant platform for search, with 48% of buyers starting search with a smartphone search engine. (Google Research)

• Mobile ad blocking is up 90% year over year, with 429 million people globally using an ad blocker on their mobile phone. (HubSpot, 2016)

The Impact of Mcommerce

• Growing retailers had 48% more visits from smartphones in January 2018 compared to January 2016, proving mastering the mobile experience is a key driver for growth. (Adobe, 2018)

• During the 2017 holiday season, $35.9 billion was spent via mobile devices — a record-setting 33.1% of online holiday revenue. Mobile also accounted for 52% of traffic to retail websites during the holidays. (Adobe Digital Insights, 2018)

• Mobile-influenced offline spending is already estimated to be over $1 trillion in 2017. (iProspect, 2017)

• 69% of consumers worldwide use mobile devices to research products before they buy. (comScore, 2017)

• 93% of people who use mobile to research products or services go on to complete a purchase. (Think With Google, 2016)

• 90% of smartphone owners use their phones while making purchasing decisions in a brick-and-mortar store. (Marketing Land, 2015)

• 88% of consumers who search for a local business on mobile call or visit that business within 24 hours. (Nectafy)

• Over half of consumers want to make a purchase within an hour of conducting research on their smartphone, and 69% of consumers expect businesses to be within 5 miles or less of their location. (Think With Google, 2016)

• 78% of mobile searches for local business information result in a purchase, higher than from any other kind of device. (comScore)

• The average smartphone user has 4.2 shopping apps installed on their phone and use about half of them on a weekly basis. (Think With Google, 2016)

• 66% of smartphone owners who use their device to shop do so at least weekly. (Think With Google, 2016)

• The top two reasons people turn to their phones for shopping is to browse products and find discounts and deals. (Think With Google, 2016) 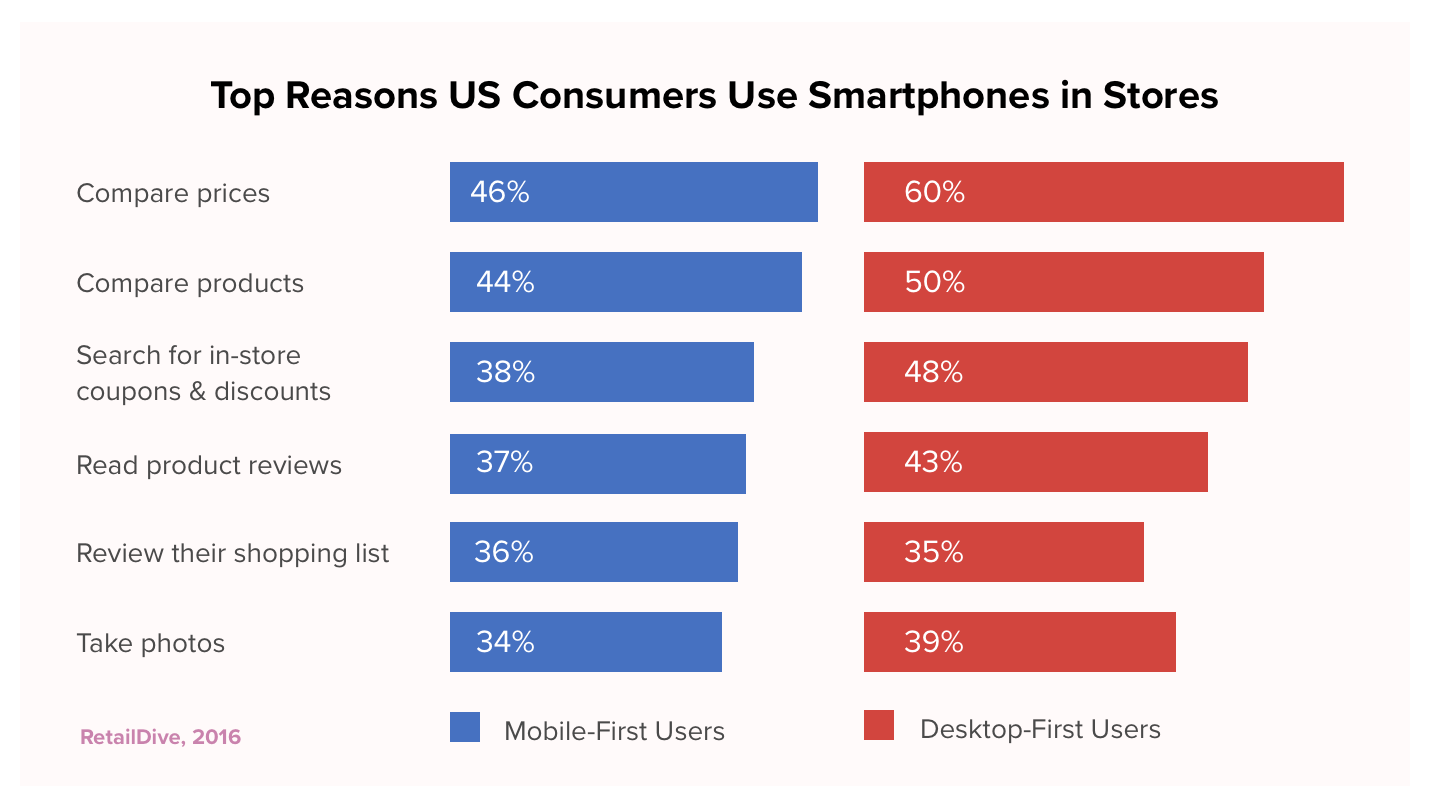 • 52% of retailers do not optimize digital content for the device consumers choose to shop on. (Retail Systems Research)

• 31% of retailers don’t provide any item recommendations on their mobile sites. (RetailDive)

• 23% of consumers claim in-app recommendations would prompt them to add more products to their shopping carts, and 33% say it would get them to spend more time in the app. (comScore, 2017)

• Most consumers use mobile apps to keep up with loyalty programs and share purchases, and turn to mobile sites for browsing and store information. (Think With Google, 2016)

• 57% of consumers say they won’t recommend a business with a poorly designed mobile site. (socPub, 2017)

• 63% of smartphone users prefer their shopping apps to require sign in for secure access. (Think With Google, 2016)

• 91% find push notifications from shopping apps useful, with the most helpful notifications being shipping/delivery updates, new discounts, and price reductions for a followed product. (Think With Google, 2016)

Discover how new technologies are changing the mobile landscape.

• Nearly half (42%) of Americans use digital voice assistants on their smartphones. (Pew Research, 2017)

• 24% of marketers plan to add messaging apps to their content strategy in the next year. (HubSpot,  2017)

• Beacon-triggered messages in the US alone are expected to prompt retail sales worth $44.4 billion. (Statista, 2016)

Learn what tactics today’s marketers are incorporating into their strategies.

• 58% of companies surveyed have a dedicated mobile marketing team. (Salesforce, 2015)

• 43% of marketers say they use social media shares or likes to measure mobile marketing success. (Statista, 2015)

• 83% of mobile users say that a seamless experience across all devices is very important. (Wolfgang Jaegel, 2015)

• Personalized marketing campaigns are projected to shift $800 billion of revenue to the 15% of companies that get it right over the next five years. (Monetate, 2017)

• Organizations are experiencing as high as 3x ROI for personalization efforts. (Monetate, 2017)

• Data quality and understanding buyer behavior in context were the two biggest challenges facing businesses when it comes to personalization. (Monetate, 2017)

• 37% of mobile marketers say the top challenge facing mobile advertising in the US is privacy issues. (Statista, 2015)

Check out our collection of articles, free downloadable resources, and interviews with mobile marketing experts for more tips and advice.