Mobile App Surveys: How to Collect In-App User Feedback (And What to Do With It)

Building a successful app means constantly gathering feedback from users to refine and improve your product. But getting — and acting on — useful feedback is easier said than done.

In-app surveys are some of the best ways to gather valuable user insights, increase engagement and retention, and take the guesswork out of growing your app.

In this article, we’ll cover best practices for creating a mobile app feedback form, app feedback examples, and advice on what to do with the user feedback you collect. Plus get a free download with sample mobile app survey questions.

Why In-App Surveys Are Ideal for Collecting User Feedback

One of the biggest challenges in collecting app user feedback? Getting people to respond!

Mobile web surveys can have response rates as low as 1-3%. In-app surveys, on the other hand, see an average 13% response rate.*

Capturing feedback without asking users to leave the app limits friction — and has the added benefit of increasing time spent in the app.

Get laser-specific questions answered by narrowing your app feedback survey audience. Target based on factors like app version, completing (or not completing) certain in-app actions, average order value or subscription level, or other custom attributes to zero in on specific user experience issues.

With clear insights into specific aspects of the user experience, you’ll be able to prioritize your product roadmap and make smarter decisions about where to devote your time and resources.

By targeting specific users and identifying user pain points, you’ll be able to improve the user experience in ways that matter most to your audience — and boost retention rates.

NPS scores and rating prompts are a quick way to identify happy users and get more 5-star ratings. And on the flipside, you’ll be able to uncover unhappy users and give them an outlet to share their comments directly with you, instead of airing their complaints on app stores.

At the end of the day, gathering user feedback is about gaining a deeper understanding of why and how people use your app. With that knowledge, you’ll be able to exceed their expectations and turn them into loyal customers and brand advocates.

Ready to implement some in-app surveys and UX polls? For best results, follow these essential Dos and Don’ts.

DO: Get the Timing Right

The last thing you want to do is interrupt the user experience with annoying pop-ups. Remember, users are doing you a favor by sharing feedback. So don’t ask too much too soon and don’t interrupt them in the middle of a task.

Avoid asking for feedback when they’ve just launched the app for the first time. Or when they’re in the middle of making a purchase, conducting a search, or sharing content.

The best possible time to ask?

When they’ve completed an action and are feeling happy and excited. Think right after a shipment has been delivered, they’ve beat a new game level, crossed an item off their to-do list, completed a workout, or finished streaming a movie. They’ll be much more motivated to share their feedback.

DO: Keep it Short

Mobile is not the ideal format for a comprehensive 10-question mobile application survey. Ask 1-2 questions max to boost response rates, and aim for answers users can select with a single tap. Whenever possible replace text answers with visuals or emojis.

Check out the in-app feedback survey used by the popular Human Activity Tracker app. The first question is simple and straightforward and lets users respond with a single tap on an emoji. It doesn’t take over the whole screen, and it’s easy to dismiss for users who aren’t interested in responding.

The follow-up question offers the opportunity to give more in-depth feedback, but it’s not required. And by asking users to provide their contact information for a follow-up, it’s clear the team is interested in individual responses and deeper conversations. 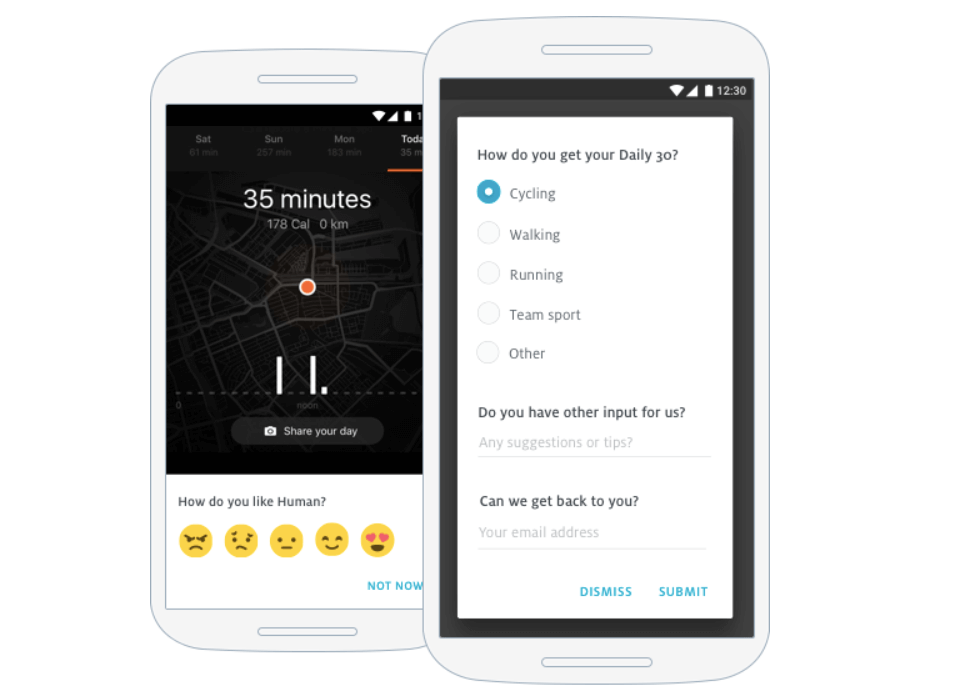 It bears repeating: users are doing you a favor by sharing their feedback. They don’t owe you anything.

So don’t spam them with pop up surveys every session, and make overlays easy to dismiss. Users who aren’t ready to share their feedback need a quick and easy way to get back to what they were doing without frustration.

Collecting user input doesn’t have to be a formal survey or poll. Look for ways to incorporate simple feedback loops into your UI.

Take Spotify, for example. One of the app’s key value propositions is helping users discover new music. The Spotify app includes heart and cross buttons for suggested songs in the user’s daily mix. It’s a quick and easy way for Spotify to get feedback on how well their suggestions match to what users like. And it’s a useful way for users to directly and immediately improve their suggested songs and discover new favorites. 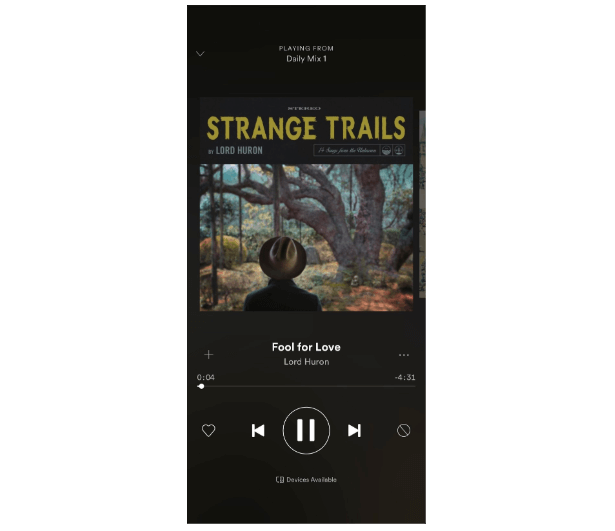 Save questions that require a longer written answer for email surveys or personal follow-ups. You can also consider offering small incentives to complete longer surveys that span more than a question or two: 10% off, free shipping, or a free trial extension, for example.

Restaurant search and discovery app Zomato does this brilliantly with a simple, one-line text field that encourages users to share whatever quick thoughts they have — with an invitation to send more detailed feedback to a dedicated email address. 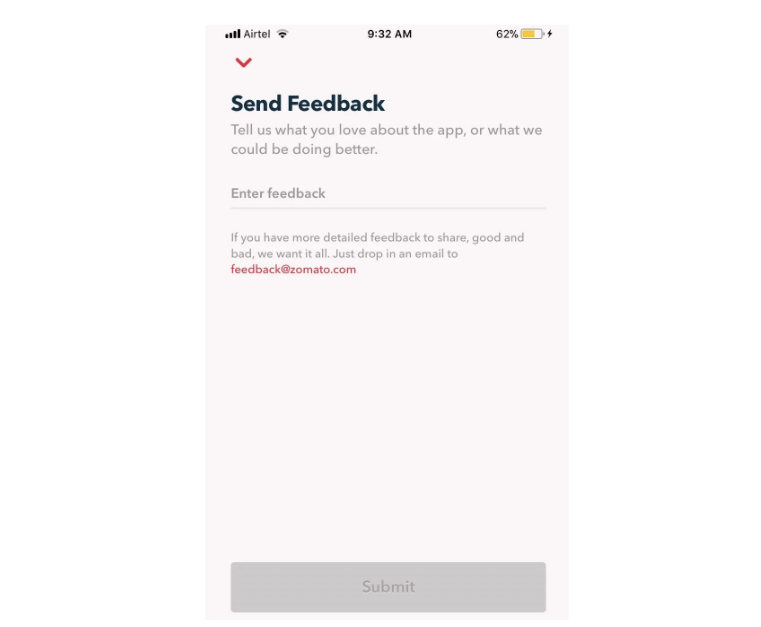 Another way to gather feedback aside from pop-ups is to include them as permanent additions to your app. Make them easily discoverable without cluttering your UI by adding them to headers/footers, top menus, or as an option when users click your social media icons or Support/Contact Us links.

The Lego Life app actually highlights polls as a key feature in their app, giving their passionate and vocal user base a way to both provide valuable feedback on Lego products and connect with other members of the Lego community. A list of polls is shown in a newsfeed, and feature both official Lego polls and user-submitted polls. 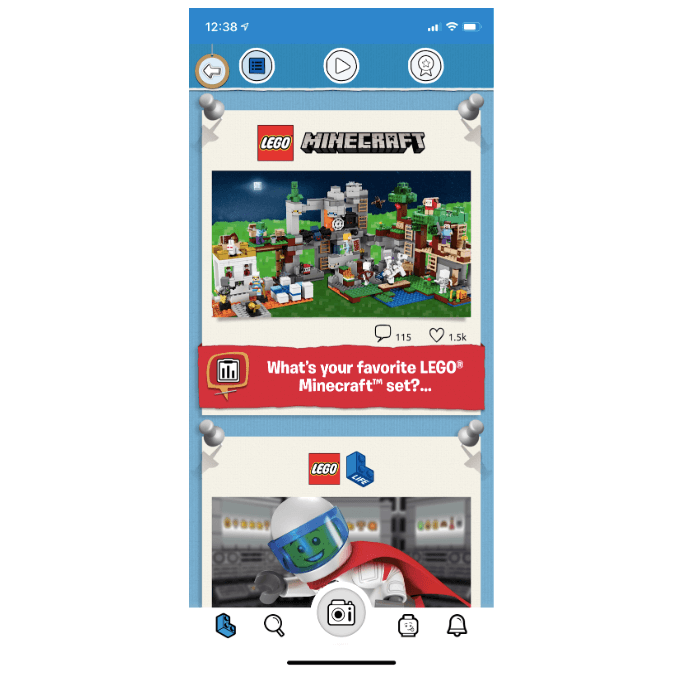 Twitter has similarly featured surveys and polls in its newsfeed to gather feedback in a way that doesn’t interrupt the user experience. 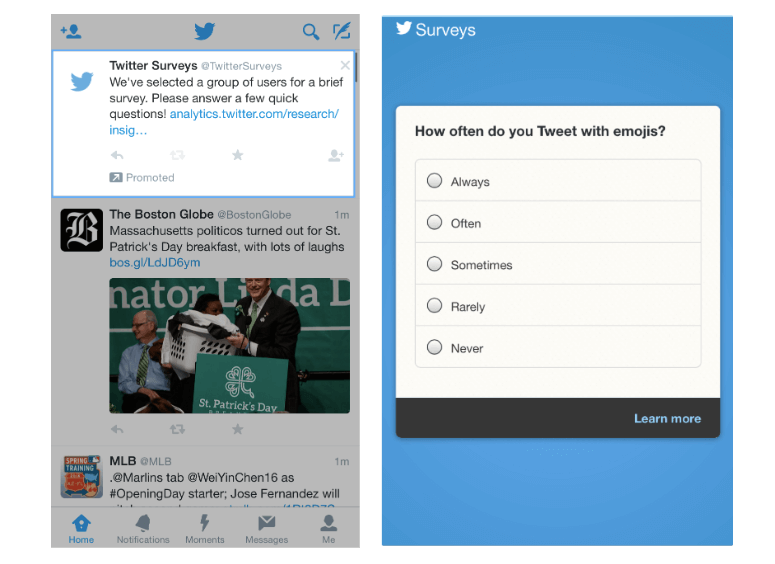 DO: Create Segments Based on Response

Once you collect feedback, make it actionable. By creating segments of users based on survey responses, you can follow up and better engage your users.

For example, people who requested a certain feature can be invited to beta test it, or notified when it launches. Satisfied users can be invited to join your loyalty or rewards program, share user-generated content, or recommend the app to friends. Dissatisfied users can be notified of new feature or content releases, or followed up with a personal contact from support.

DO: Let Users Know You’re Listening — to the Good and the Bad

Once more for good measure: your users are doing you a favor by providing feedback! Thank them in your release notes or new feature announcements, and send personal emails showing your appreciation for their time and interest in your product. Even (especially!) when it comes to negative feedback.

Nike + Run Club experienced this firsthand when they redesigned their popular running app back in 2016. To say users were unhappy would be an understatement — Nike’s app store listing and social media pages were inundated with angry users who were missing favorite features, disliked the new UI, or lost personal data. 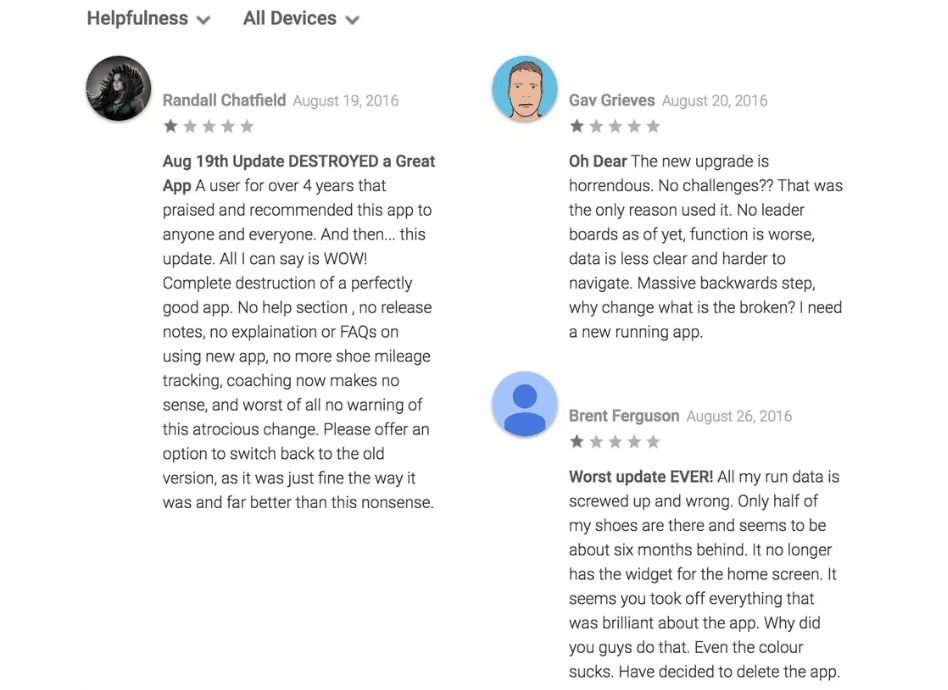 Today the Nike+ Run Club app is currently #15 in all health and fitness apps on the Apple App Store, with nearly 190k reviews and a 4.8 star rating.

So what turned it around? The Nike+ team’s response to all this user feedback.

Nearly every social media post and negative review received a detailed response from the team that showed their dedication to resolving the issues and ensuring the app satisfied their users’ needs. They made announcements and wrote blog posts thanking users for their vocal feedback and assuring them every comment was heard and taken to heart. 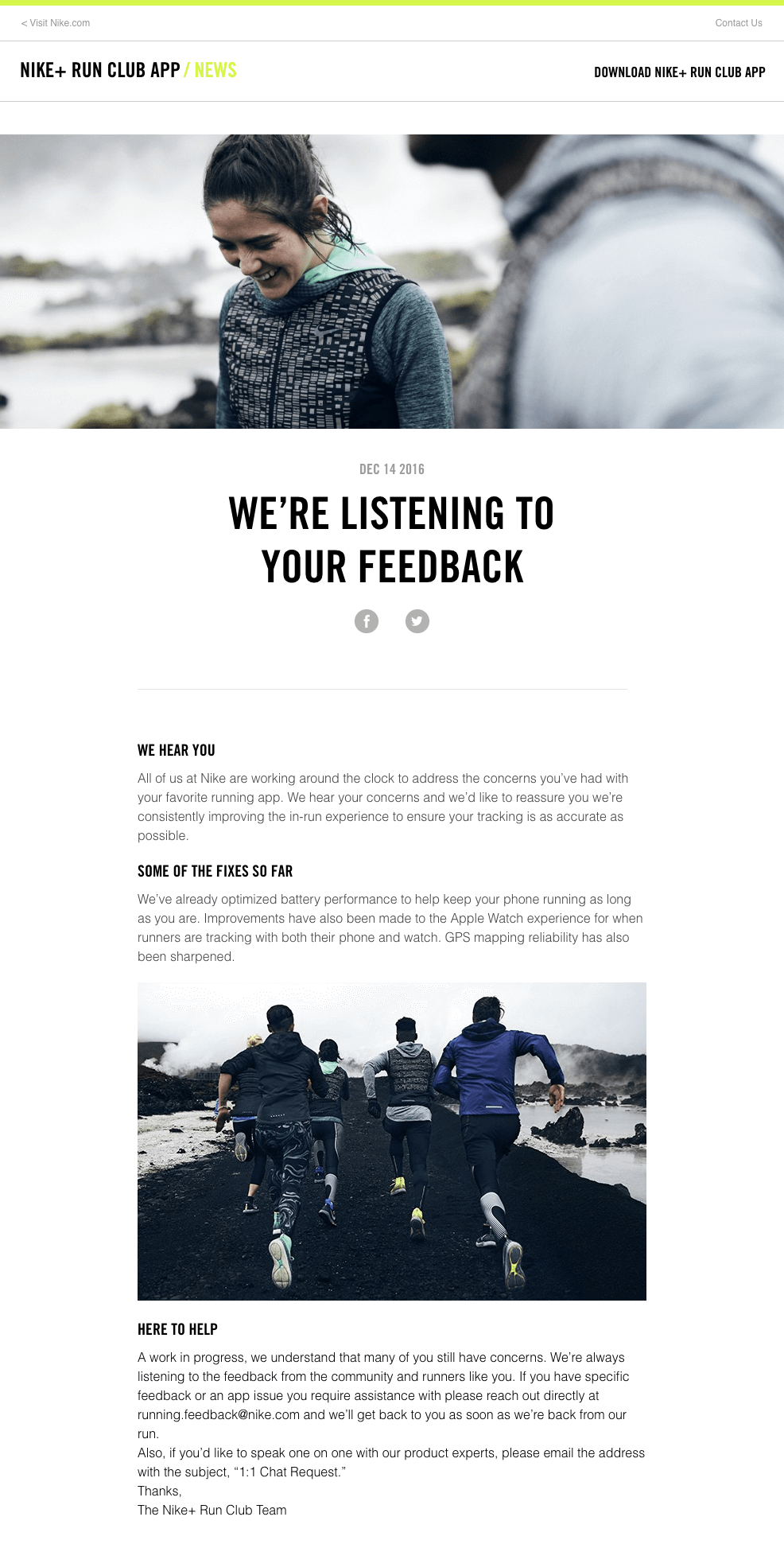 Users need to know that their feedback isn’t falling on deaf ears. Even if your app isn’t perfect, they’ll appreciate knowing that you care about their experience and want to make the best possible app for them.

Not sure which questions to ask for app feedback? We’ve created a mobile app feedback template with 50 app survey questions guaranteed to get insightful, actionable user feedback.

How to Act on User Feedback

The hardest part about collecting user feedback? Figuring out what to do with it.

How do you distill so many voices into a clear signal to act?

How do you prioritize requests to have the biggest benefit to your users and your business?

Erik Devaney at Drift offers some of the best practical advice on how to turn customer feedback into a practical plan for improving your app.*

By lumping feedback into these three categories, you can better organize user comments, get issues in front of the right teams, and actually start doing something about them. Devaney says their team enters user feedback into this framework and assigns tasks to the appropriate department every two weeks.

Once you have a better idea of the issues users are facing, how do you prioritize them?

If your app follows the freemium model, it’s important to consider who is providing the feedback: a free user or a paid user. 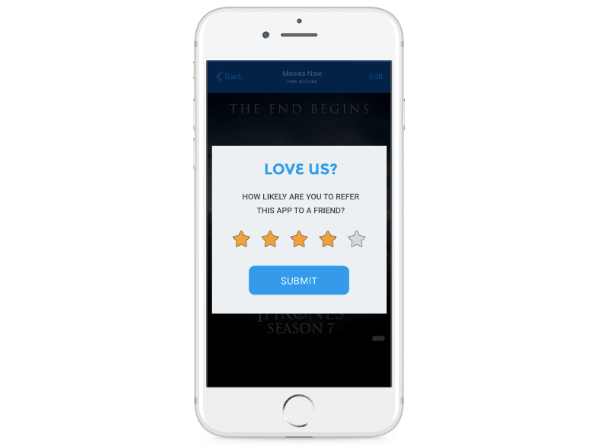 Don’t want to mess with custom HTML? Quickly create in-app surveys using the In-App Builder. Just customize the template according to your needs and you’re ready to launch. 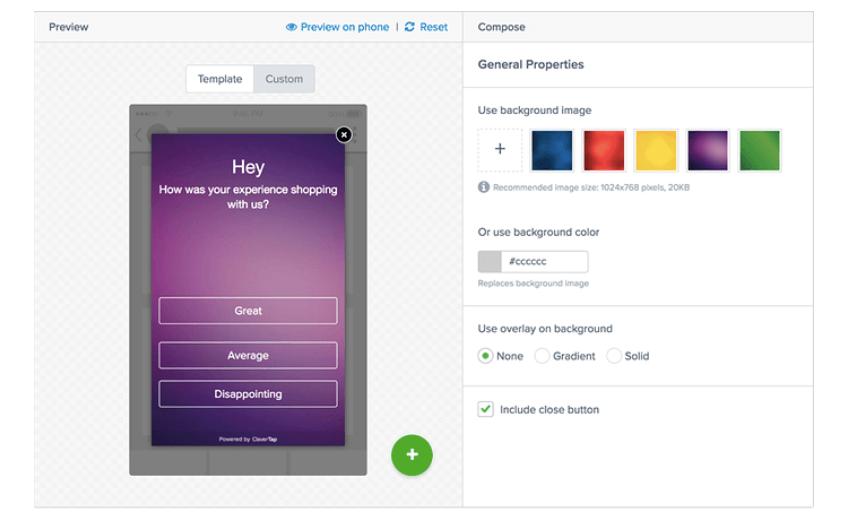 CleverTap will collect user responses as soon as they start rolling in, so you can watch results and view stats for each survey option.