The pace of online and in-app commerce continues to see staggering growth as more consumers stay home – and away from physical stores. Little wonder mobile is forecast to drive nearly three-quarters of all e-commerce sales globally this year.

The impact is profound.

The seismic shift in consumer habits and the massive surge in e-commerce have combined to catapult the entire retail industry more than four years into the future in just under four months. It’s a windfall for marketers — and an opportunity for retailers — everywhere to deepen engagement when consumers’ dependence on commerce apps has never been higher.

But it’s not enough to offer consumers good deals and irresistible discounts. Retailers need to keep up a dialog with consumers and step up with marketing and messaging that is human and helpful. It’s the golden rule that The Sole Supplier, headquartered in the U.K., has followed to become a leading global online destination for footwear from over 100 different retailers.

But the company allows consumers to do more than search, compare prices, and make purchases. It curates content, including the latest sneaker news and details on new releases, to help consumers stay on top of trends and be aware of bargains. It’s the winning combination that has helped The Sole Supplier drive deep ties with its growing community of fans. More importantly, it’s the clout that has caught the attention of major names, such as Nike, which has chosen The Sole Supplier as a strategic partner.

“This means we work with Nike to elevate all of their products and their campaigns,” says George Sullivan, CEO and Founder of The Sole Supplier. It’s a massive milestone for a company that has evolved from a garage startup (first headquartered in a spare room in Sullivan’s parents’ house) to a global player. It’s also the role that convinced The Sole Supplier to aim higher. It recently expanded to showcase sports and training apparel, supported by a dedicated social hub to help spread the word. “It’s driven millions in revenue for some of our key retailers,” he adds.

Appearing as a guest on the Reimagine Growth podcast miniseries, Sullivan shares how working with CleverTap to “humanize” messaging and combine commerce, content, and community has allowed the company to rocket organic reach, achieving 70% revenue growth on average, year on year over the past five years. (Since the recording, Sullivan reports 2020 was the biggest year yet for his company. Sales and engagement were up 113% compared to the previous year. Sullivan says that push notifications from the app, including price alerts and restock reminders, drove over 1.5 million clicks on Black Friday alone.)

There’s no denying that sneaker fans are a tight-knit group, Sullivan says. “They’re more of a tribe, and they are brought together by their love of sneakers and the culture they stand for. People love the shoes, and they want to swap pairs if they didn’t get their size or maybe want to help someone find a pair that’s right for them.” Whatever the motivation for the interaction, it’s behavior that sets the tone for communicating with the community. “This is about passion, not just purchases,” Sullivan explains. It’s about an approach to marketing and messaging that is “genuine and genuinely understands the community.”

It starts with exceptional and exclusive content.  But working with CleverTap ensures the right information reaches the consumers likely to value it the most.

It’s why, Sullivan says, he runs marketing operations like a newsroom. “Our USP has always been to be one of, if not the first, with all the info on the shoes across the U.K. and European market,” he explains. “Straightaway, and as soon as we get a piece of breaking news, we treat it like a big news outlet. We’re sending a push to the right people. We’re sending an email, and we’re publishing on the site and – within minutes – it’s all out to the audience that wants and needs to know it, and we are the originator of that news.”

Being first with the news – and having the data-informed segmentation capabilities to deliver it to the right tribes at the right time – has tremendous and lasting benefits, Sullivan says. “You get a lot of respect from people because you are providing value that saves them time and gives them what they need to know quickly.” That respect also translates into revenues. 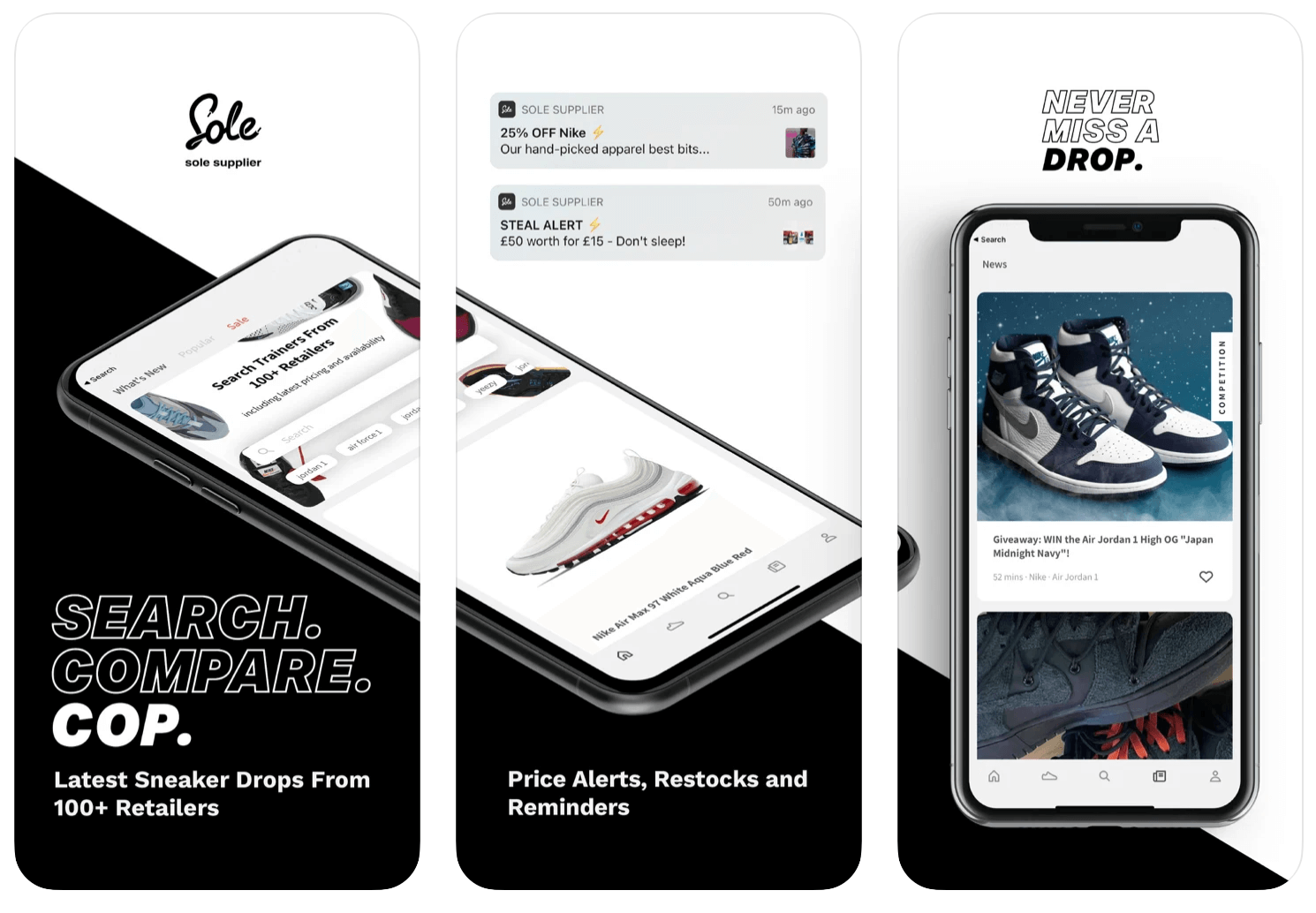 At The Sole Supplier, an in-house marketing team of 25 has evolved to become an “arm of the business’s content marketing,” Sullivan says. This requires the skill set to drive customer connection as well as sales. The team creates social posts, manages the community (which includes two Facebook groups with almost one million members), develops video content, and combines all this in campaigns to activate and motivate consumers at scale. “The challenge is to do content marketing authentically and use tools and automation effectively.”

Working with CleverTap allows the team to decide the balance and gauge the results, Sullivan says. The team can create campaigns in CleverTap manually, and they can also take advantage of features that allow automation where it counts. “You can hit your audience in an automated way, saving yourself time and ensuring you are engaging in the right way.”

The data is the guide and has helped The Sole Supplier segment and serve consumers based on behavior and preferences, Sullivan says. “We now know that people don’t want to be hit with too many messages, and they need to be hit with the right messages. So our team manages messages to make sure that the right people get the right communications.”

Adapting messaging to align with key consumer segments and their engagement preferences based on how they interact with the app or website has allowed The Sole Supplier to achieve incredible conversion rates. “Our click rates on push notifications and emails are 3x the industry average,” Sullivan says. “So, it’s definitely working for us.”

Iterating to Spark Conversations and Community

The Sole Supplier is ringing in the revenues. More importantly, it’s developing frameworks to ensure messaging constantly and consistently strikes a chord with customers. The exercise of setting up and adapting segmentation to how consumers interact is the inspiration for approaches that encourage more profound and lasting engagement. One outcome is the observation that customers really do like to be in control, Sullivan says.

“It’s really good to put the control in the hands of the user. So, one of the features we’re developing lets the individual user decide at a granular level which notifications they want to receive.” From restock reminders to alerts when prices drop, users make the call. “This is really important because there are way too many brands that assume too much about their users – and that’s how users get upset. They’re getting messages about stuff they don’t want because the brand has assumed this is right.”

To ensure messaging hits the mark, The Sole Supplier also uses the CleverTap platform to run split testing. In a typical scenario, the team will run several variations for the same ad and then pick the best performer based on what a specific audience segment likes. “Then we’ll tailor the wording of the best performer again and go for another three variations.”

Throughout the test, it’s critical to align the tone with the audience. Analyzing data and results has allowed The Sole Supplier to discover important audiences and key learnings. “Our audience doesn’t like to be told what to do,” Sullivan explains. “They don’t like to be told ‘buy now’ or directed.” Ironically, subtle and somewhat low-key pitches ultimately clinch the deal and drive loyalty.

TL;DR Buying online and in-app was popular long before the pandemic. But phenomenal growth since the lockdown opens opportunities for clever companies to elevate the retail experience and evolve messaging to drive connection, not just revenues.

The Sole Supplier does both with the help of fresh, original, and compelling content around sneaker news and trends to provide customers with the information they appreciate. A similar approach is at the core of marketing messages, which tap data and analytics to provide value to each individual.

From restock reminders to price alerts, The Sole Supplier tailors marketing messages to talk to the right consumers in the right way.

Once you understand the “who” of your audience, you can dig deeper into the data to grasp the “how” of their behavior. Combining these insights allows you to map a complete customer journey and perfect the “what” of your messaging.

In the case of The Sole Supplier – a company that caters to a tight-knit community of fans united by their passion for sneakers and the culture they stand for – data revealed hard-sell pitches to “buy now” were more annoying than attractive.

Your audience may be different but never assume. Harness data and analytics to make the match and equip your teams to deliver the mix of content and commerce that drives engagement AND revenues.

Messaging must be authentic. But it must also be automated to activate and motivate consumers at scale.

However, increased effectiveness doesn’t have to come at the cost of empathy. Draw from the data to craft (and continually improve) messaging that resonates with consumers.

To learn more about how The Sole Supplier is reimagining growth, tune into the entire interview.