When scheduling campaigns for Push, SMS or Web push notifications you can choose to have CleverTap deliver the messages all at once at a designated time, or stagger the delivery to reach each user in his or her local timezone. 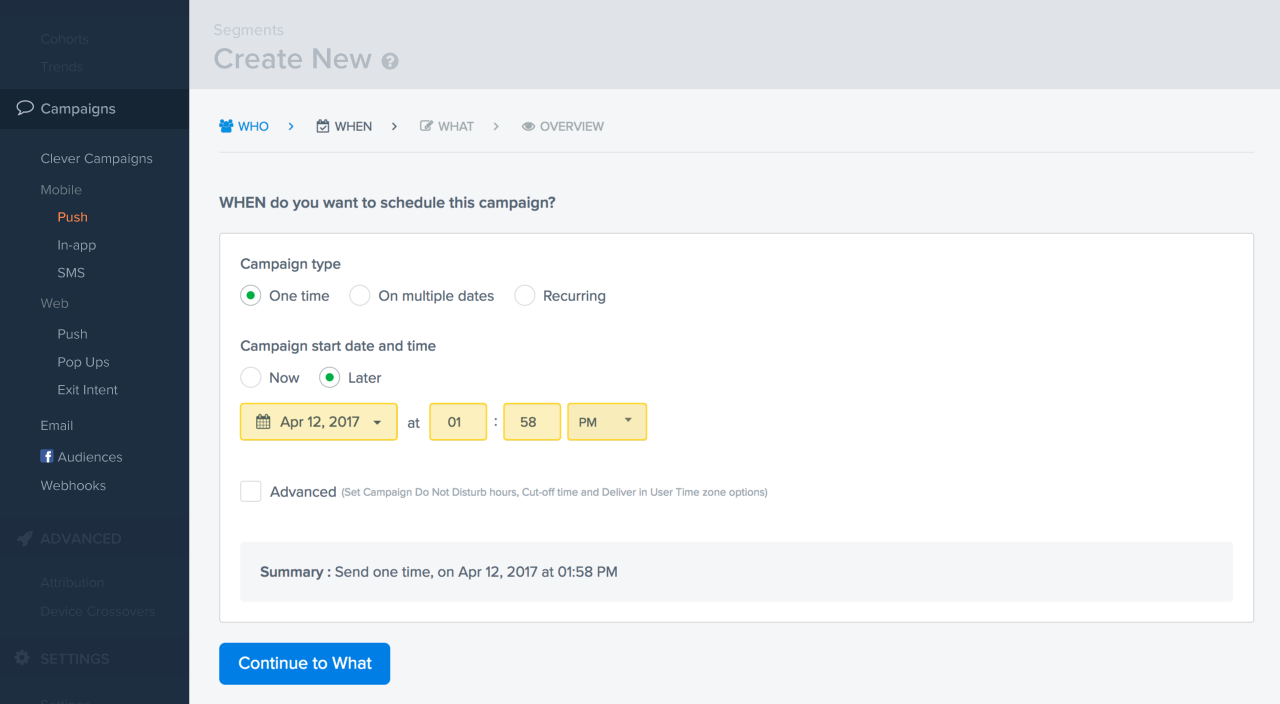 But what if you have a campaign that needs to arrive at a particular time in a user’s local timezone? Say you’re a food delivery app and you want to run a promotional campaign to reach each user exactly at lunchtime. Just check the advanced option to “Deliver in the User’s timezone” and CleverTap will stagger the delivery of this campaign to reach users at 12:00pm sharp! 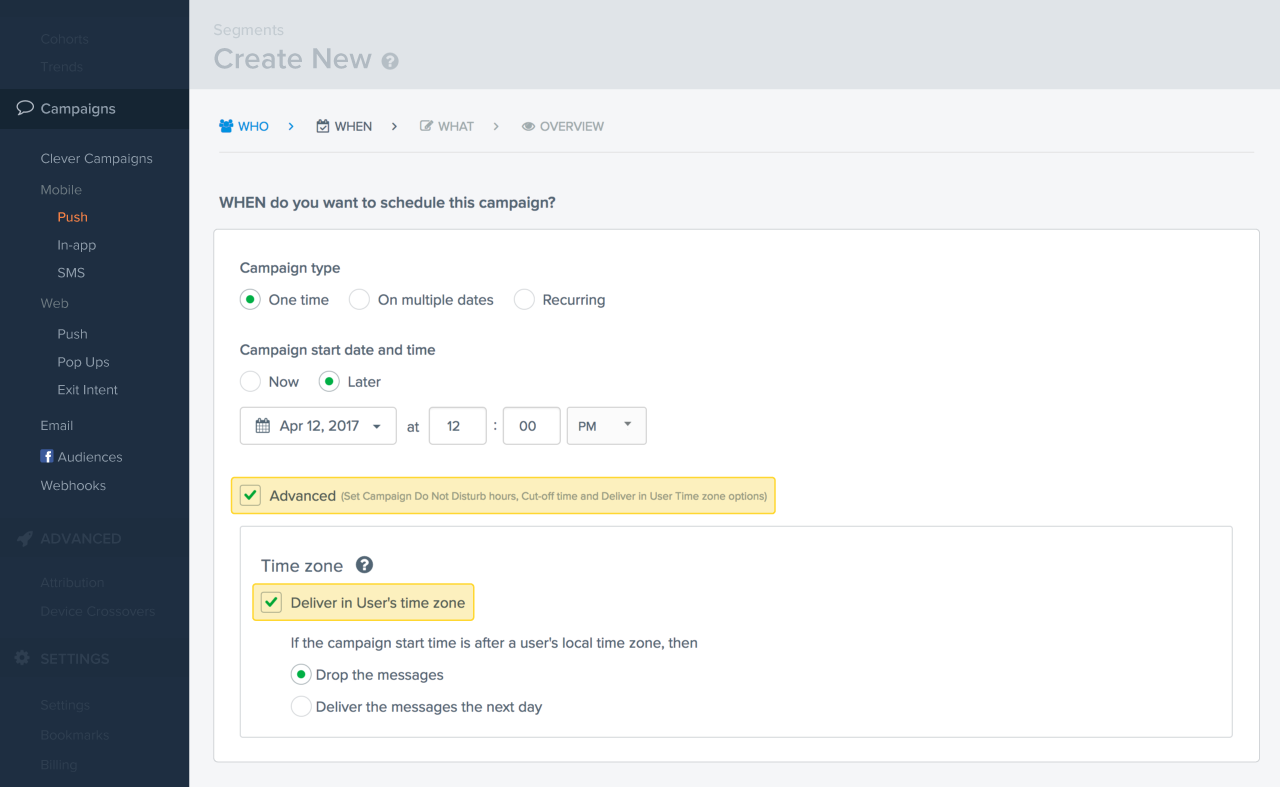 So how does it work?

Let’s assume for example I’m a Product Marketer on the East Coast setting up this campaign at 11:00am Eastern. I set the Campaign Start Time for 12:00pm and schedule the campaign to run.

A typical campaign will execute for every timezone around the globe delivering messages to any user who may qualify in each timezone.

We’ve added two additional delivery options  – drop messages or hold for delivery the next day – giving you maximum control over your campaigns. 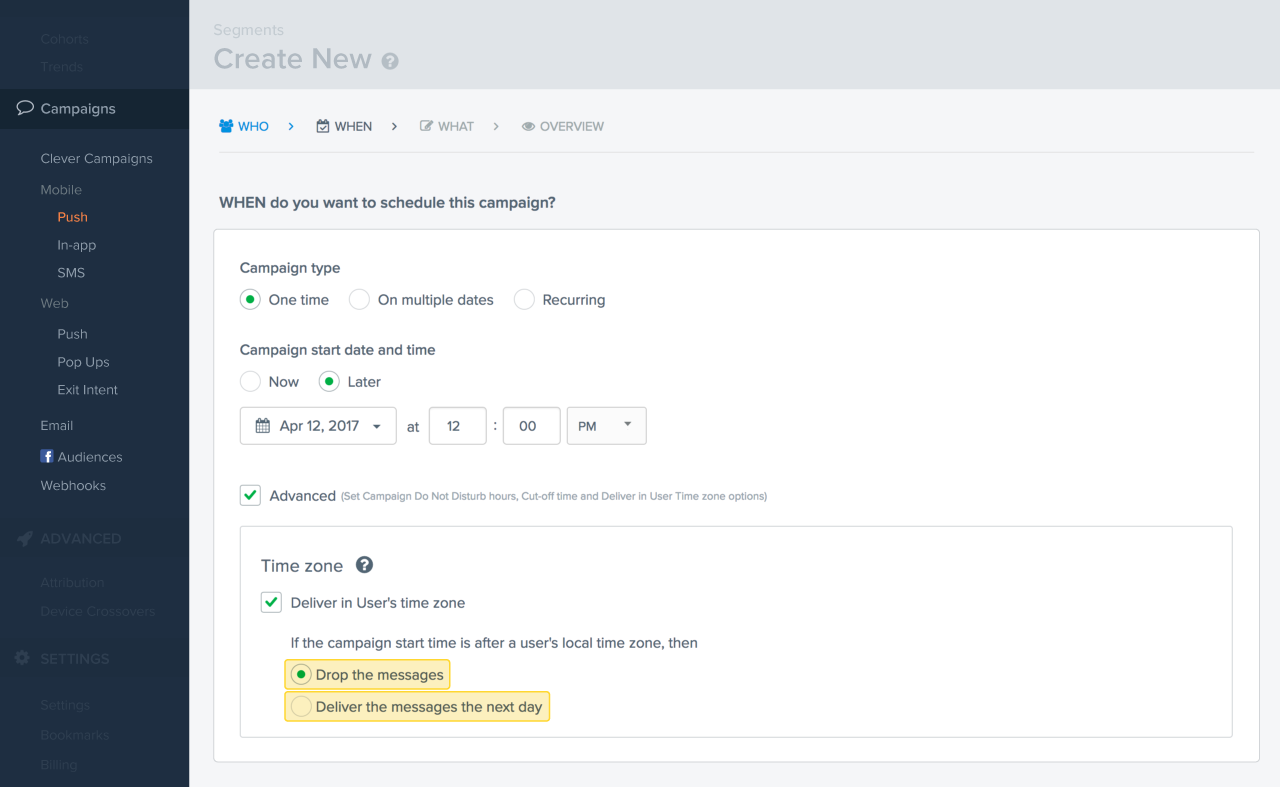 Here’s how these delivery options work:

In the above example, say I’m that same Product Marketer but now located in the Midwest (Central time). It’s 11:30am and I need to schedule that lunchtime campaign – to be delivered in each user’s local time. As above we set the Campaign Start Time to 12:00pm and the first set of messages go out at noon Central time. Two hours later my West Coast users get the campaign.

Since I initiated this campaign at 11:30 am Central – it was already 12:30pm Eastern – after the specified delivery time for my East Coast users.

The campaign will continue to deliver messages in each timezone moving from East to West until it reaches the first timezone (technically Christmas Island!).

Now if I select the option to Drop the Message for any user whose timezone had already been passed when the campaign was kicked off – then the campaign will end at that first timezone. My East Coast users will NOT receive this campaign (remember campaign execution moves from East to West relative to the Campaign Start Time which is in your CleverTap Account Timezone).

If however I select the option to Hold and Deliver the Next Day, then we continue executing that campaign for every timezone around globe and eventually deliver the campaign to my East Coast users at noon (their time) the next day.

So if a campaign is critical to be delivered on a certain calendar day (say it’s an Easter Campaign and the message has to arrive on Easter Sunday or not at all –> Choose the Drop the Message option.

Alternatively, if the date doesn’t really matter, then select –> Hold and Deliver the Next Day.