The Ooredoo Group is a leading telecommunications company with a significant presence across markets in the Middle East, North Africa, and South Asia. Ooredoo Kuwait was commercially launched in 1999 and provides mobile, broadband internet, and corporate managed services to businesses and consumers.

To improve the consumer experience, the company launched the My Ooredoo App in 2012. As a part of their digital transformation strategy, they introduced new features like ANA service (Kuwait’s first completely customized plan), Ooredoo Surprises, and Digital Service Subscriptions. As a testament to the app’s success, Ooredoo Kuwait won for best mobile/tablet application in the 2019 MENA Digital Awards.

In 2017, the team was revamping their app and building the pillars for the digital arm of their business. Intending to adopt an omnichannel model, they focused on initiatives that would get users to explore the app and make payments. They soon realized that an important pillar for their digital presence was missing: digital engagements.

Unless users were engaged in the app, there was no way to increase revenue. To address this, they used Firebase and several custom-built solutions to try for more persuasive campaigns. But, the functionalities of this arrangement were limited. For example, their existing stack could not send rich-media push notifications.

In the pipeline, they had initiated plans to cross-sell and up-sell on the app, along with kickstarting ecommerce where users could purchase SIM cards and other products. But without robust engagement tools in place, they couldn’t advance their omnichannel marketing goals.

Ooredoo Kuwait has a user base of over a million active users. When they sent a broadcast message to their user base, they found that even if only 1-2% of their users opened the app to watch the broadcast, this would result in capacity issues.

Ooredoo also faced some stability issues. They needed a way to intelligently engage with their users without reaching capacity limits.

As part of their data, the team had logs stored in their server as well as triggered events with Firebase. But they could not establish correlations between the logs and Firebase events. This meant that if a customer launched the app and underwent a particular journey, the team didn’t have much visibility into that user’s actions or preferences. To successfully engage with customers in real time, it was critical for them to understand the user and identify meaningful behavioral trends.

The main goal is to grow their user base and achieve high retention rates. Other goals include increasing the number of digital transactions and cross-selling various products to users. While searching for an engagement tool, they determined the processes that they needed to automate and started developing their customer engagement plans.

With CleverTap’s complete engagement toolkit, Ooredoo Kuwait is now able to build meaningful relationships with customers and holistically apply data-driven insights to grow and retain its user base.

Dashboards for visibility and reporting

Custom dashboards give the team a high-level overview of everything happening in the app. The dashboards double as a reporting tool, letting them organize and monitor crucial KPIs then share the results with various stakeholders. CleverTap allows them to quickly compare key metrics in a single view and define their priorities. Also, they can easily monitor the overall health of the business and identify trends and patterns in user behavior.

Using behavioral segmentation, they segment users based on key events for their business such as app launch, recharge, bill payment, using a service, renewing a service, and renewing a package.

They also segment users based on actions not taken: user groups who haven’t recharged, who haven’t paid their bills on the app, or who haven’t opened the app in a specific timeframe. Then, they create specific campaigns to increase engagement for these users.

After creating segments based on past behavior, Ooredoo Kuwait uses CleverTap to further segment users based on their transactional activity using recency, frequency, and monetary analysis (RFM). The entire user base is divided into 10 distinct groups, ranging from champions and loyal users to hibernating and at-risk users. They can also identify users who transition from one group to another and further refine their engagement strategy.

Initially, the digital engagement team used CleverTap mainly for campaigns. Over time, they incorporated an onboarding Journey to hand-hold users for the first 30 days, which now has a 21% conversion rate.

Many companies get to know their customers through a mandatory sign-up process where users link their social profiles. In the My Ooredoo Kuwait App, as soon as a user installs the app, the users are logged in automatically. As a network operator, they already have details like user name and phone number. This results in a seamless login experience. On the flip side, they don’t have much additional information about the customer beyond name and phone number.

With the 30-day onboarding journey, they can nudge users to provide more information by asking what prompted them to sign up and if they’re facing any issues, which helps to uncover more patterns in user behavior.

Discovering patterns in user behavior is easy with CleverTap’s suite of analytics tools. Funnels and cohorts help Ooredoo Kuwait better understand the composition of their user base. Using Pivots, they found that the peak time for app launch is between 6-7 pm.

Ooredoo Kuwait has now achieved a conversion rate of 21%. For their rewards program Nojoom, their conversion rate stands at 31%. They also saw a 15.3% uptick in conversion trends and reduced uninstalls by 8.5%. 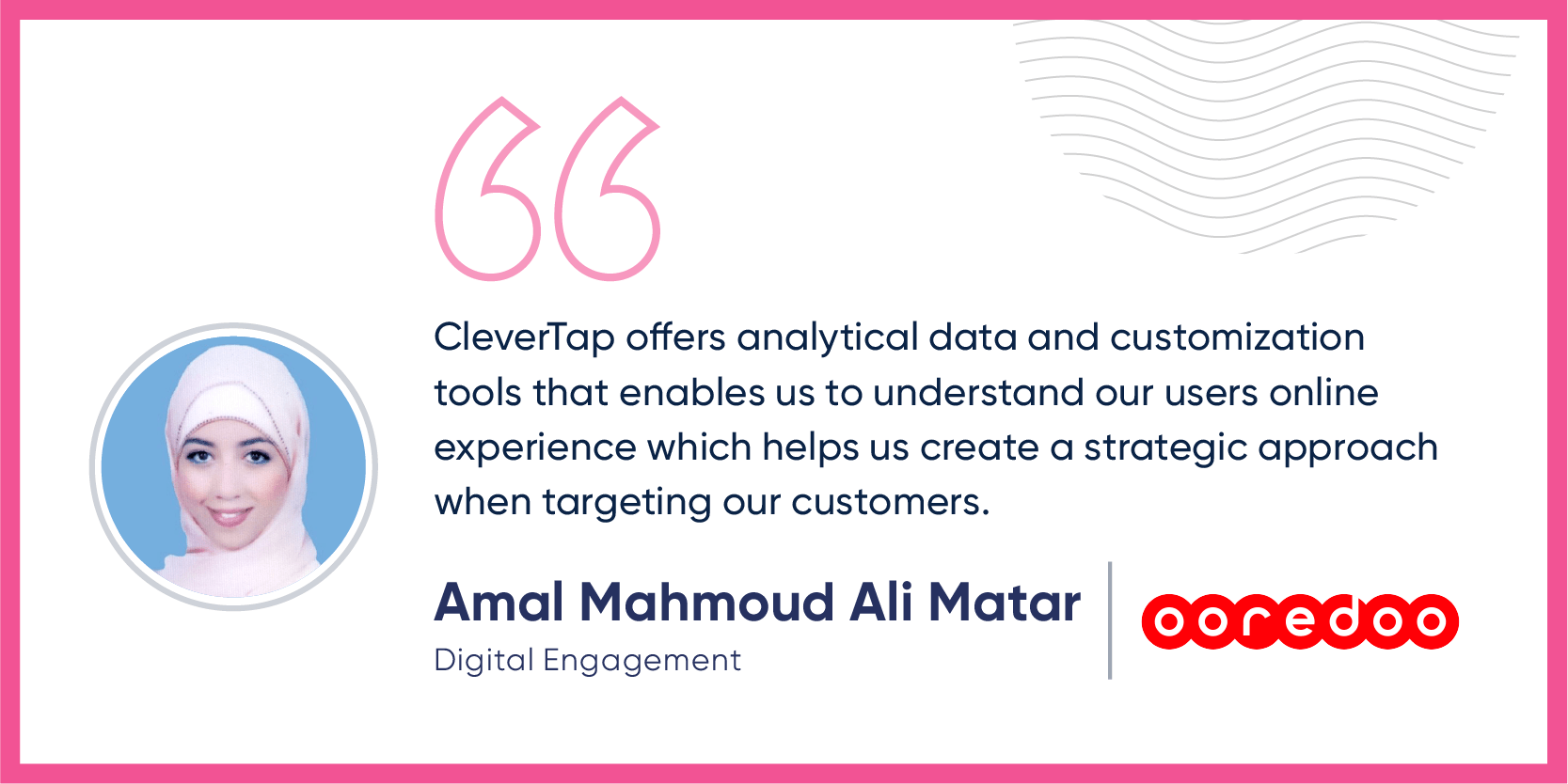 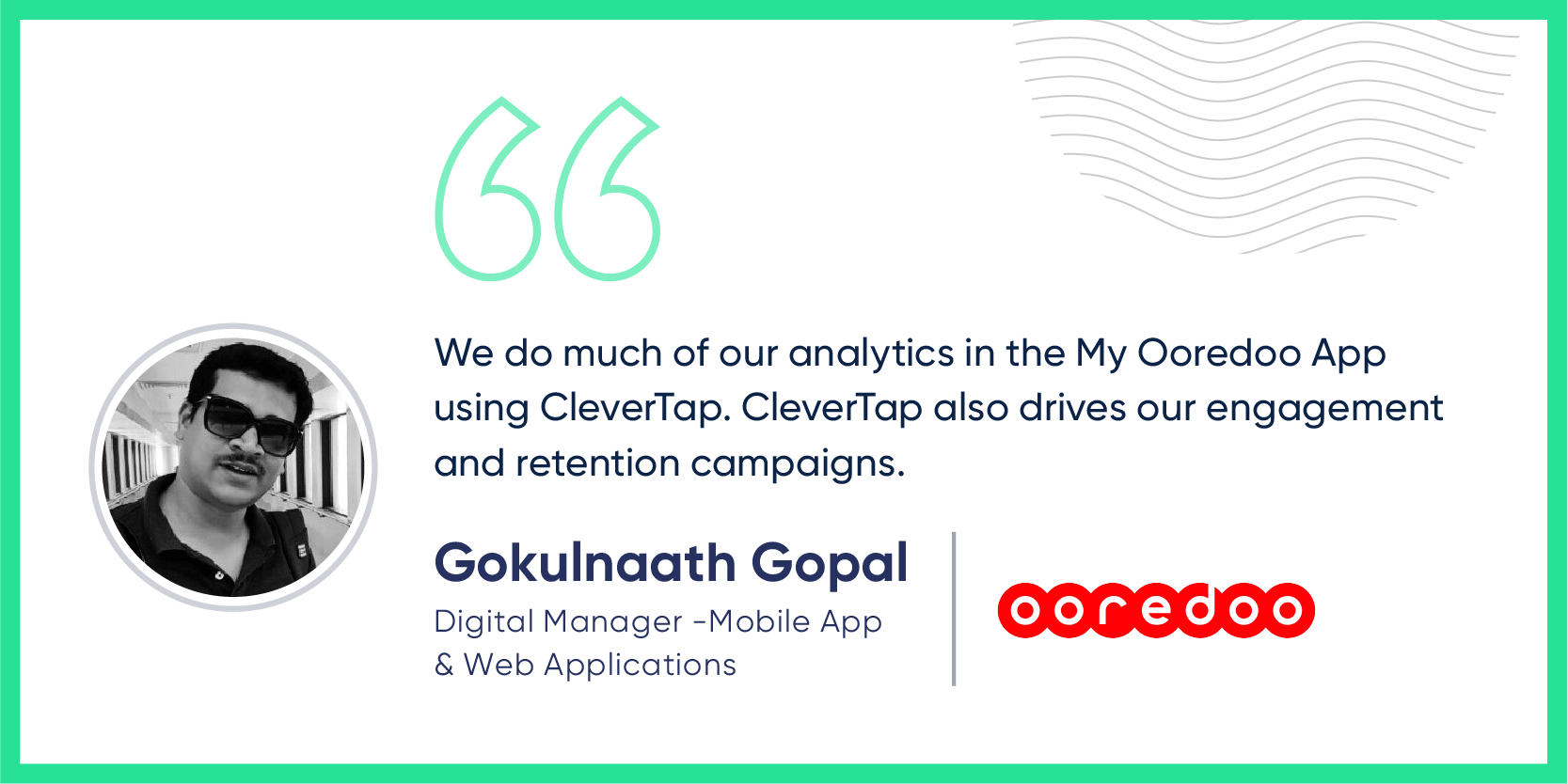 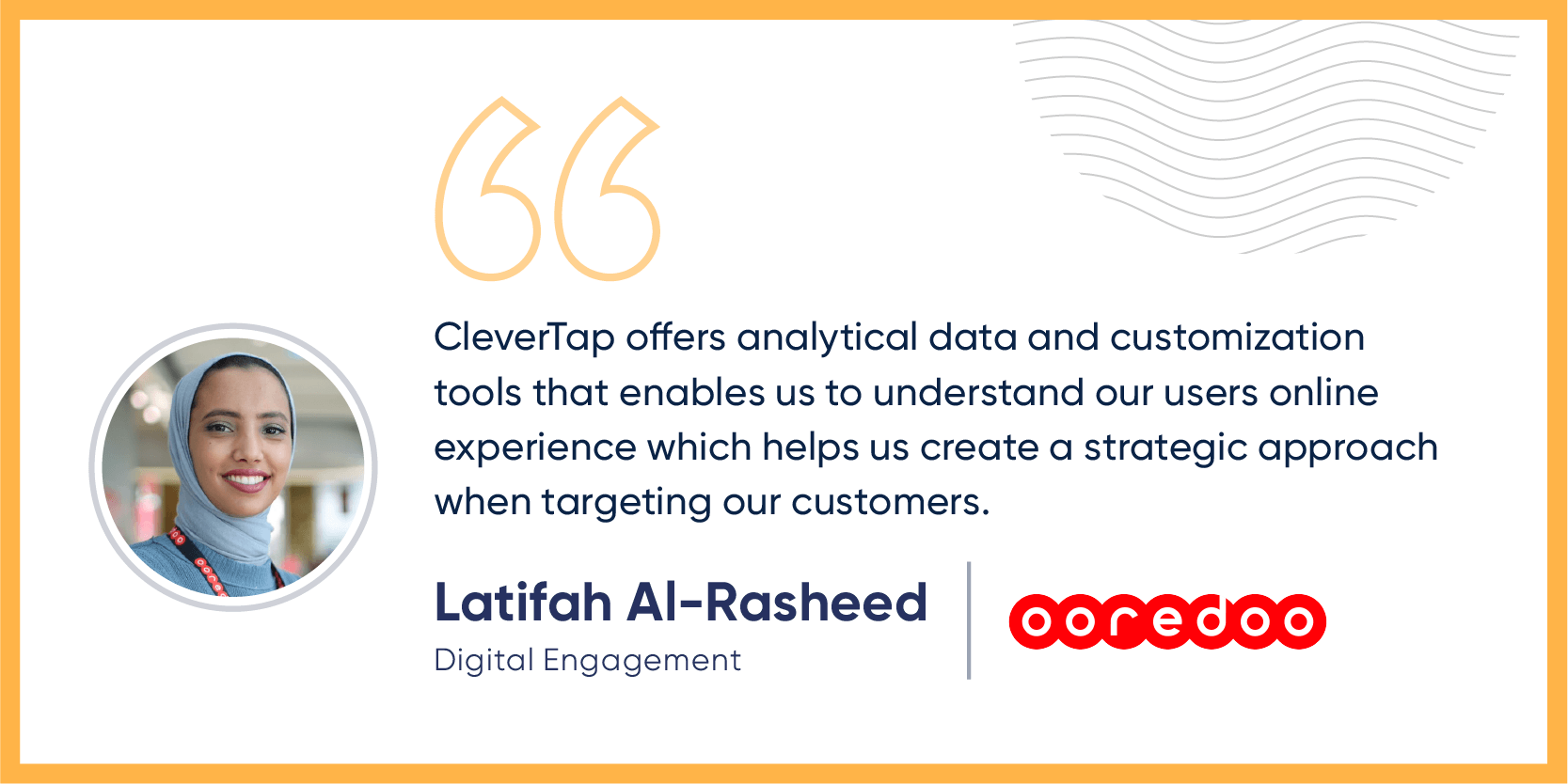 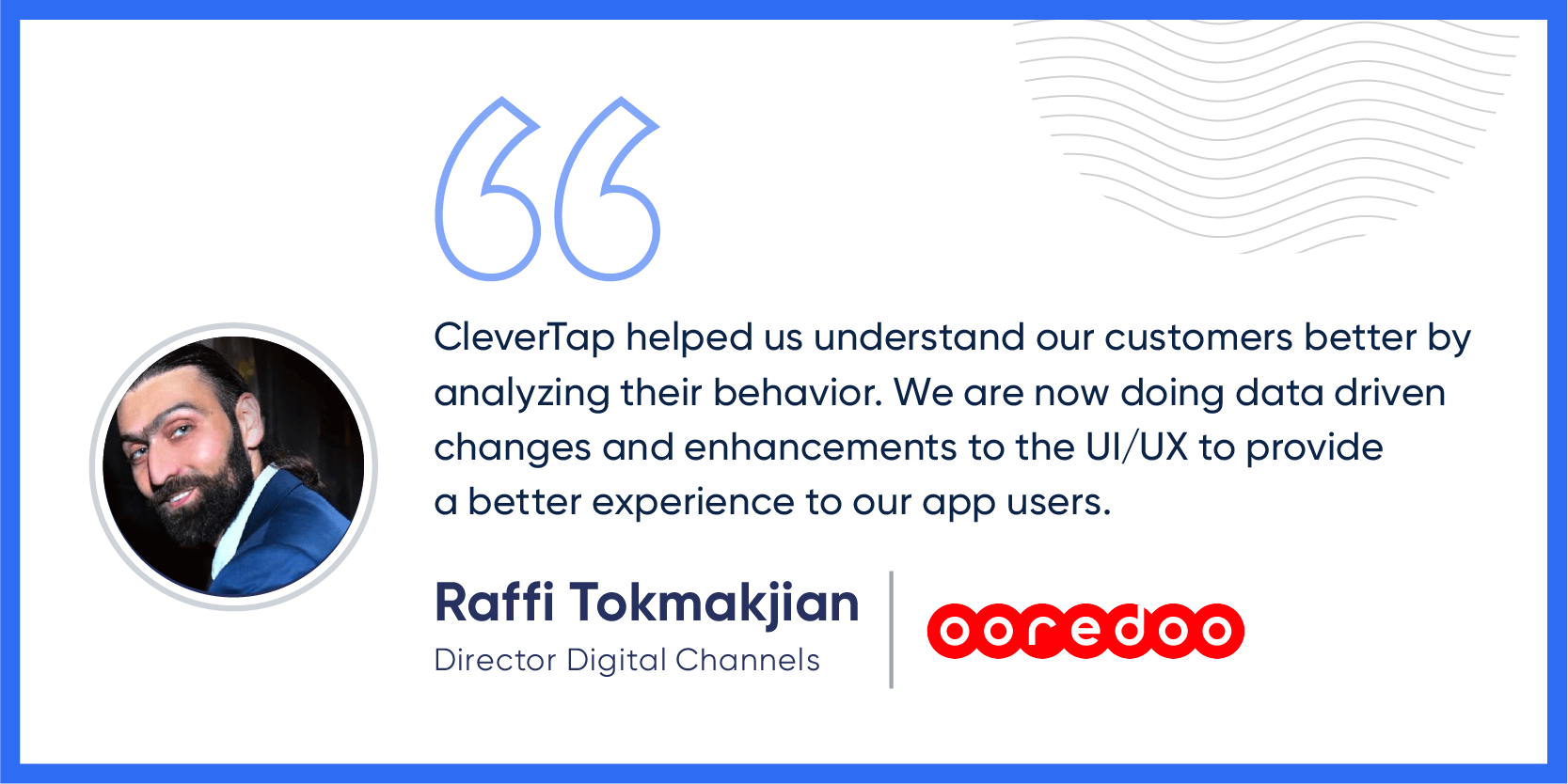 The team at Ooredoo Kuwait plans to start using webhooks for Ooredoo Surprise to support their automated marketing efforts. If a user views the offer and doesn’t convert, a webhook is triggered by their CVM platform. The tool provides a real-time offer and sends a push or in-app notification trigger using CleverTap to alert users.

Loved it? Get this in your inbox.