Top Six Mobile Gaming Trends That Matter in 2021 and Beyond

Here’s an exciting stat: worldwide digital games market earnings rose by 15% to reach $11.6B in January 2021. What’s more, mobile grew by 6%. This increase in earnings marks a milestone for the industry and consumers. How exactly will 2021 mobile gaming trends continue to accelerate this growth and evolution?

We’ve identified six trends that we believe will matter in 2021 and for many years to come. The statistics that support these trends, as well as quotes from mobile and gaming experts, shine a light on key trends around 5G, top-grossing titles, in-game advertising, and connected communities that expect more innovation from developers. Jump to our infographic to see even more stats around the future of mobile gaming.

Let’s start with some general eye-catching facts that set the scene for mobile gaming in 2021.

Trend 1: Gaming Will Continue to Reach All Generations

Video games – like generations of players – have grown up. You are no longer tied to a plugged-in console or reach the end of a game after a weekend. You can play on any device, you can play with friends next door or across the world, and you can watch a game in real-time.

According to a Deloitte study,₂ before COVID-19, the average US consumer had 12 paid media and entertainment subscriptions. Looking at the generational breakdown:

There appears to be a catch-22 with 5G technology: the increase of people working from home resulted in the need for a more robust 5G rollout. However, due to the pandemic, the expansion of 5G has slowed and been delayed in some parts of the U.S.

The key benefits of 5G for mobile gaming:

Currently, the major networks have deployed 5G for at least 200 million people, with T-Mobile leading the way at 270 million.₃ But even with this optimism and expansion, it is still early days. Here are some stats to get excited about:

Trend 3: Top Grossing Mobile Titles Are Worth $ and Downloads

In a SuperData report,⁴ the top 10 grossing mobile titles were ranked, based on worldwide earnings from January 2021. Here is the list: 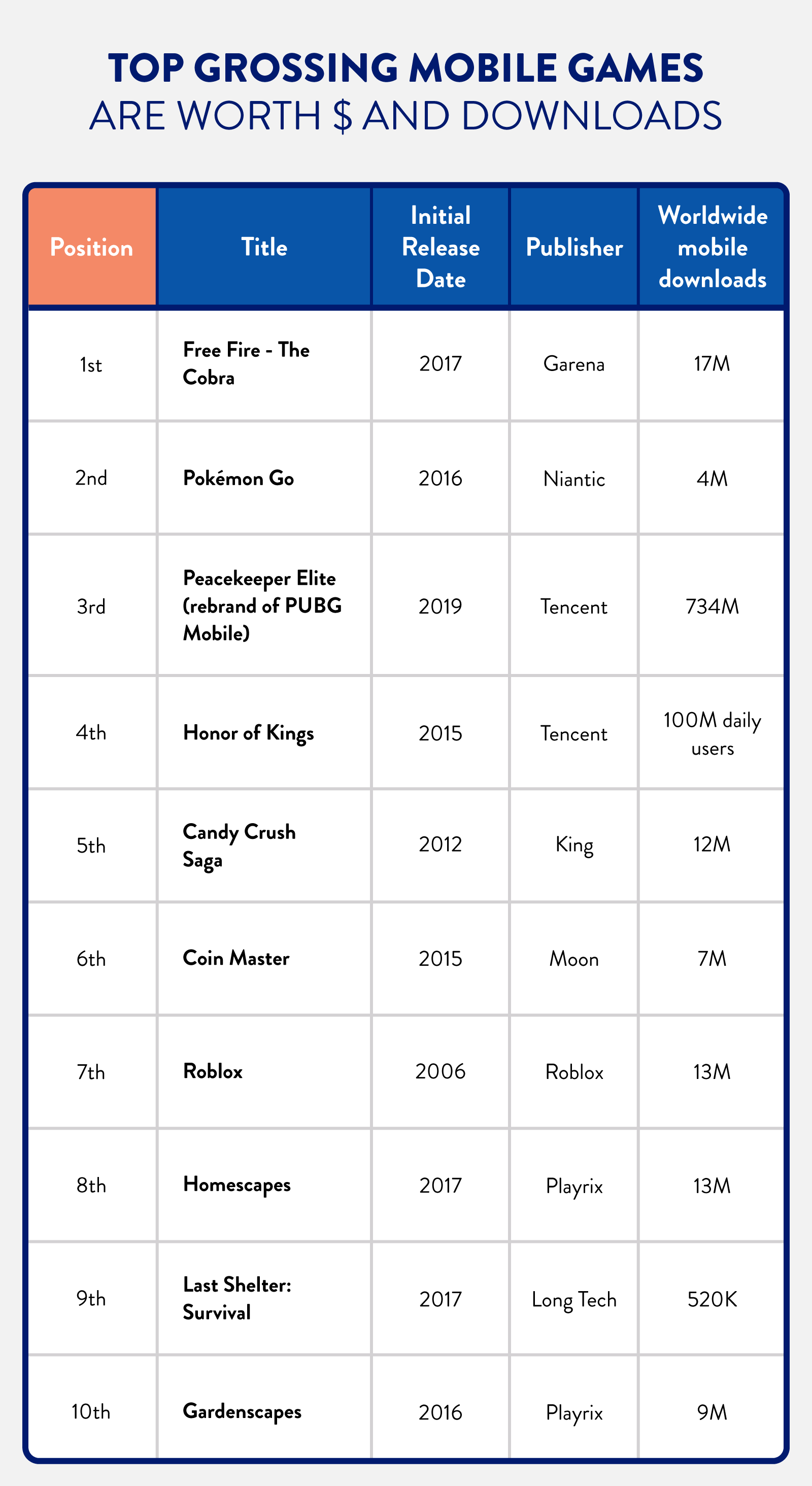 The report also ranked cities based on gaming environment, internet quality and coverage, as well as gamer and developer opportunities. Seattle appeared in the top five for each ranking criteria and had one of the highest percentage populations of people aged 18 to 49. With the average age range of a video gamer being 35 to 44 years, it appears that Seattle is a prime place for gamers.

Whatever region gamers reside in, the opportunity to connect with other gamers — sometimes in different countries — is high. In fact, 65% of video game players play with others⁶. A perfect example of this is Among Us, which was first released in 2018. The game encourages people to work together to complete a wide range of tasks while one or two people are, in secret, trying to prevent the team from succeeding. The key to its success: fun, empowering ways to connect.

How else are gamers utilizing games to be social?

In the last year, the majority of Americans have been unable to or preferred not to shop in physical stores, leading to brands readjusting their advertising strategies. If you can’t serve a location-based push notification or mobile ad, how can you reach customers? For mobile gaming, the upward trend is all about smarter, playable ads.

According to a study by AdInMo⁷, there are two popular in-game ad formats:

Trend 6: Play vs. Watch: Gamers Will Have More Choice

When you think of spectator sports, you probably think of tennis or football. But gaming has been a spectator sport for a decade, particularly thanks to Twitch, a video live streaming service that launched in June 2011.

The business model has, in many respects, done a 180: audience growth has now overtaken player growth. This means in the short and long term, developers will need to think about the needs and wants of audiences, not just gamers.

Here are some interesting stats to explain this further:

While no one has a crystal ball, these six trends shine a bright light on how mobile gaming has evolved in the last 10 years, the main players who continue to dominate headlines and leaderboards, as well as how mobile gaming will grow even more in 2021.

Overall, current and future mobile gaming trends are just a snapshot of the predicted path that mobile gaming will take us on this year and many years to come. The trends we touched on are just some to keep an eye on.

As we mark a year since the beginning of the pandemic in the US, eyes will also be on the continued effects on gaming habits and behavior. Will gamers play more or less as they are able to venture outside their homes? Mobile gaming means that you can do both.

Copy/paste this code to publish this infographic on your own blog: